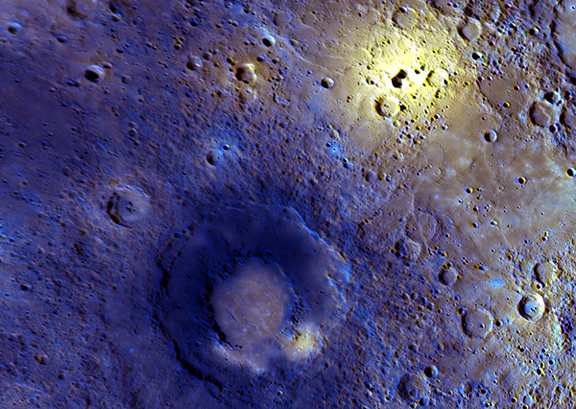 A NASA spacecraft’s third and final flyby of Mercury gives scientists, for the first time, an almost complete view of the planet’s surface and provides new scientific findings about this relatively unknown world.

A NASA spacecraft’s third and final flyby of Mercury gives scientists, for the first time, an almost complete view of the planet’s surface and provides new scientific findings about this relatively unknown world.

The Mercury Surface, Space Environment, Geochemistry and Ranging spacecraft, known as MESSENGER, flew by Mercury on Sept. 29. The probe completed a critical gravity assist to remain on course to enter into orbit around Mercury in 2011. Despite shutting down temporarily because of a power system switchover during a solar eclipse, the spacecraft’s cameras and instruments collected high-resolution and color images unveiling another 6 percent of the planet’s surface never before seen at close range.

Approximately 98 percent of Mercury’s surface now has been imaged by NASA spacecraft. After MESSENGER goes into orbit around Mercury, it will see the polar regions, which are the only unobserved areas of the planet.

“Although the area viewed for the first time by spacecraft was less than 350 miles across at the equator, the new images reminded us that Mercury continues to hold surprises,” said Sean Solomon, principal investigator for the mission and director of the Department of Terrestrial Magnetism at the Carnegie Institution of Washington.

Many new features were revealed during the third flyby, including a region with a bright area surrounding an irregular depression, suspected to be volcanic in origin. Other images revealed a double-ring impact basin approximately 180 miles across. The basin is similar to a feature scientists call the Raditladi basin, which was viewed during the probe’s first flyby of Mercury in January 2008.

“This double-ring basin, seen in detail for the first time, is remarkably well preserved,” said Brett Denevi, a member of the probe’s imaging team and a postdoctoral researcher at Arizona State University in Tempe. “One similarity to Raditladi is its age, which has been estimated to be approximately one billion years old. Such an age is quite young for an impact basin, because most basins are about four times older. The inner floor of this basin is even younger than the basin itself and differs in color from its surroundings. We may have found the youngest volcanic material on Mercury.”

One of the spacecraft’s instruments conducted its most extensive observations to date of Mercury’s exosphere, or thin atmosphere, during this encounter. The flyby allowed for the first detailed scans over Mercury’s north and south poles. The probe also has begun to reveal how Mercury’s atmosphere varies with its distance from the sun.

“A striking illustration of what we call ‘seasonal’ effects in Mercury’s exosphere is that the neutral sodium tail, so prominent in the first two flybys, is 10 to 20 times less intense in emission and significantly reduced in extent,” says participating scientist Ron Vervack, of the Johns Hopkins University Applied Physics Laboratory, or APL, in Laurel, Md. “This difference is related to expected variations in solar radiation pressure as Mercury moves in its orbit and demonstrates why Mercury’s exosphere is one of the most dynamic in the solar system.”

The observations also show that calcium and magnesium exhibit different seasonal changes than sodium. Studying the seasonal changes in all exospheric constituents during the mission orbital phase will provide key information on the relative importance of the processes that generate, sustain, and modify Mercury’s atmosphere.

The third flyby also revealed new information on the abundances of iron and titanium in Mercury’s surface materials. Earlier Earth and spacecraft-based observations showed that Mercury’s surface has a very low concentration of iron in silicate minerals, a result that led to the view that the planet’s crust is generally low in iron.

“Now we know Mercury’s surface has an average iron and titanium abundance that is higher than most of us expected, similar to some lunar mare basalts,” says David Lawrence, an APL participating mission scientist.

The spacecraft has completed nearly three-quarters of its 4.9-billion-mile journey to enter orbit around Mercury. The full trip will include more than 15 trips around the sun. In addition to flying by Mercury, the spacecraft flew past Earth in August 2005 and Venus in October 2006 and June 2007.

The spacecraft was designed and built by APL. The mission is managed and operated by APL for NASA’s Science Mission Directorate in Washington.

For more information about the mission, visit: http://www.nasa.gov/messenger