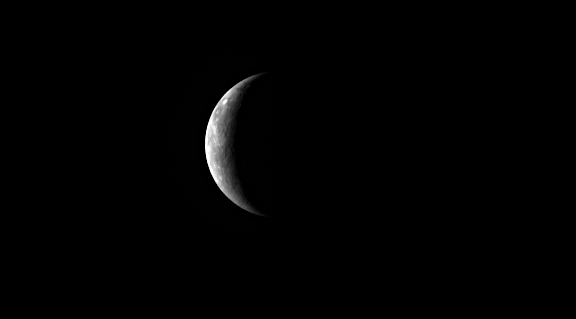 Image: With four days remaining until MESSENGER’s third flyby of Mercury, MDIS captured this NAC image of the approaching planet. Mercury appears as a sunlit crescent, and the MESSENGER spacecraft is quickly approaching at a speed of approximately 3.3 kilometers/second (7,400 miles/hour)! View this animation to watch the many instrument observations planned for the upcoming encounter next week. Larger image

Image: With four days remaining until MESSENGER’s third flyby of Mercury, MDIS captured this NAC image of the approaching planet. Mercury appears as a sunlit crescent, and the MESSENGER spacecraft is quickly approaching at a speed of approximately 3.3 kilometers/second (7,400 miles/hour)! View this animation to watch the many instrument observations planned for the upcoming encounter next week. Larger image

WASHINGTON — NASA’s Mercury Surface, Space Environment, Geochemistry, and Ranging spacecraft known as MESSENGER will fly by Mercury for the third and final time on Sept. 29. The spacecraft will pass less than 142 miles above the planet’s rocky surface for a final gravity assist that will enable it to enter Mercury’s orbit in 2011.

Determining the composition of Mercury’s surface is a major goal of the orbital phase of the mission. The spacecraft already has imaged more than 90 percent of the planet’s surface. The spacecraft’s team will activate instruments during this flyby to view specific features to uncover more information about the planet.

“This flyby will be our last close look at the equatorial regions of Mercury, and it is our final planetary gravity assist, so it is important for the entire encounter to be executed as planned,” said Sean Solomon, principal investigator at the Carnegie Institution in Washington. “As enticing as these flybys have been for discovering some of Mercury’s secrets, they are the hors d’oeuvres to the mission’s main course — observing Mercury from orbit for an entire year.”

The spacecraft may observe how the planet interacts with conditions in interplanetary space as a result of activity on the Sun. During this encounter, high spectral- and high spatial-resolution measurements will be taken again of Mercury’s tenuous atmosphere and tail.

“Scans of the planet’s comet-like tail will provide important clues regarding the processes that maintain the atmosphere and tail,” said Noam Izenberg, the instrument’s scientist at the Johns Hopkins University Applied Physics Laboratory, or APL, in Laurel, Md. “The Mercury Atmospheric and Surface Composition Spectrometer will give us a snapshot of how the distribution of sodium and calcium vary with solar and planetary conditions. In addition, we will target the north and south polar regions for detailed observations and look for several new atmospheric constituents.”

“We are going to collect high resolution, color images of scientifically interesting targets that we identified from the second flyby,” said Ralph McNutt, a project scientist at APL. “The spectrometer also will make measurements of those targets at the same time.”

Two spacecraft maneuvers will improve the ability of the spacecraft’s Neutron Spectrometer to detect low-energy neutrons sensitive to the abundances of iron and titanium on Mercury’s surface. These two elements absorb neutrons and are critical to an understanding of how the planet and its crust formed. A combination of day and night measurements will enable scientists to test the influence that planetary surface temperature has on the neutron population. The data are important for interpreting measurements that will be made after the probe is in orbit around Mercury.

An altimeter will make a topographic profile along the instrument ground track of Mercury’s surface. The data gathered will provide additional topography of Mercury’s surface features for ongoing studies of the form and structure of its craters and large faults. The information also will extend scientists’ equatorial view of Mercury’s global shape and allow them to confirm the discovery made during the first and second flyby that Mercury’s equatorial region is slightly elliptical.

The spacecraft has completed nearly three-quarters of its 4.9-billion-mile journey to enter orbit around Mercury. The trip includes more than 15 trips around the Sun. In addition to flying by Mercury, the spacecraft flew past Earth in August 2005 and Venus in October 2006 and June 2007.

The project is the seventh in NASA’s Discovery Program of low-cost, scientifically focused space missions. The spacecraft was designed and built by APL. The mission also is managed and operated by APL for NASA’s Science Mission Directorate in Washington.

For more information about the mission, visit: http://www.nasa.gov/messenger 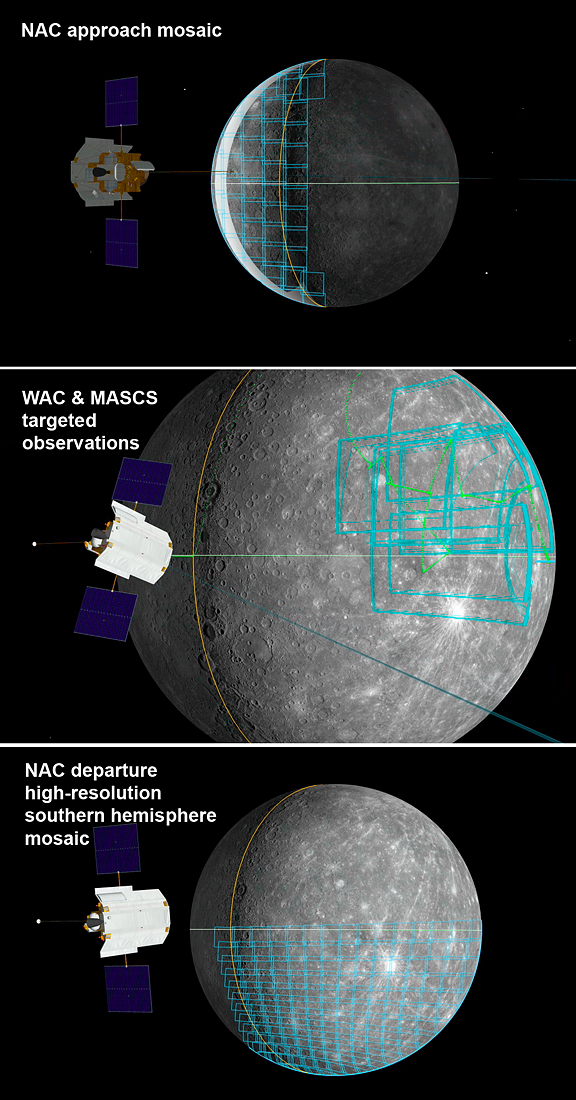 Of Interest: The MESSENGER spacecraft will pass 228 kilometers (142 miles) above Mercury’s surface for the mission’s third flyby of the Solar System’s innermost planet. The MESSENGER team has been working on the flyby observation plans for months. Three of the highlights for MDIS include:

* NAC approach mosaic. This mosaic will provide the first close-up images of a portion of Mercury’s surface by spacecraft. (That portion of the surface appears as a featureless white strip near the limb of the planet in the top image.)