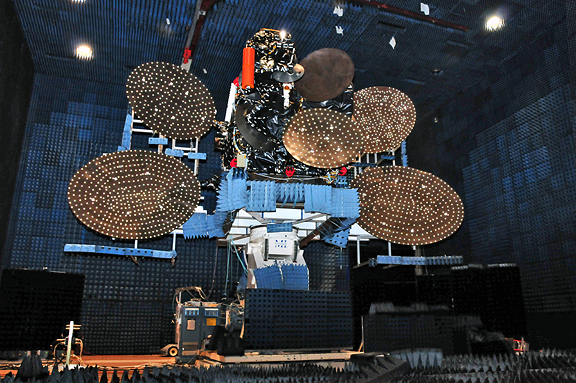 Space Systems/Loral (SS/L), a subsidiary of Loral Space & Communications (Nasdaq:LORL – News) and the leading provider of commercial satellites, today announced that it shipped a communications satellite built for SES WORLD SKIES, a subsidiary of SES (Euronext Paris and Luxembourg Stock Exchange:SESG), to Kourou, French Guiana, where it is scheduled to launch later this year aboard an Ariane 5 launch vehicle.

Space Systems/Loral (SS/L), a subsidiary of Loral Space & Communications (Nasdaq:LORL – News) and the leading provider of commercial satellites, today announced that it shipped a communications satellite built for SES WORLD SKIES, a subsidiary of SES (Euronext Paris and Luxembourg Stock Exchange:SESG), to Kourou, French Guiana, where it is scheduled to launch later this year aboard an Ariane 5 launch vehicle.

“This marks the completion of our first satellite built for SES,” said John Celli, president and chief operating officer at Space Systems/Loral. “We are pleased that the Space Systems/Loral powerful satellite platform will contribute to SES’ ongoing success in providing services to some of the world’s fastest growing markets.”

NSS-12, which will be the largest satellite in the SES WORLD SKIES fleet, is designed to enable communications services for telecommunications providers, broadcasters, corporations, and governments in Europe, Africa, the Middle East, India, Australia and Central Asia. NSS-12 will replace NSS-703 at the orbital location of 57 degrees East longitude and will help offer substantial expansion opportunities for its customers.

“NSS-12 marked the beginning of our relationship with SS/L,” said Robert Bednarek, president and chief executive officer of SES WORLD SKIES. “SS/L has been very responsive to our needs throughout the construction of this satellite and we are pleased that the completed satellite is now at launch base. We look forward to a successful launch.”

NSS-12 carries 40 C-band and 48 Ku-band transponder equivalents. Two hemispheric C-band beams covering Europe, Africa, the Middle East, and Asia to Australia are used for applications such as telephony, cable distribution and corporate networks. This coverage is augmented by a powerful C-band global beam spanning from the UK to the Far East. The satellite will also provide Direct-to-Home video through four regional Ku-band spot beams over the Middle East, Europe, Central and South Asia, and East Africa. With the combined C- and Ku-band coverage, the satellite will reach an estimated two-thirds of the world’s population.

NSS-12, which will provide service for 15 years or more, is based on SS/L’s 1300 space-proven platform, which is designed with the flexibility to support a broad range of applications and technology advances. Space Systems/Loral currently has three additional satellites under construction for SES.

SES WORLD SKIES is the new global division of SES, created through the combination of the former SES NEW SKIES and SES AMERICOM. The company operates a fleet of 25 satellites — part of the 40 spacecraft of the SES group — delivering services as diverse as television distribution and broadcast, internet access, data transmission and business and government communications to customers worldwide. SES WORLD SKIES’ unique customer-focused approach allows it to offer the best satellite solution for a host of business and government requirements, with a view toward helping customers meet their short-term challenges and realize their longer-term goals. The company comprises a world-class team of customer care and technical professionals located in Princeton (NJ), The Hague, Washington D.C., Singapore, Beijing, London, Sao Paulo, Mexico City, Sydney, Accra and Johannesburg. Visit www.ses.com for more information.

Based in Palo Alto, California, SS/L designs and builds satellites and spacecraft systems for commercial and government customers around the world. As the leading provider of commercial satellites, the company works closely with satellite operators to deliver spacecraft for a broad range of services including direct-to-home television, digital audio radio, broadband Internet, and digital multimedia broadcasting. With more active transponders on three-axis controlled spacecraft than any other satellite manufacturer, SS/L helps customers meet business objectives with advanced solutions based on space-proven heritage designs. For more information, visit www.ssloral.com.