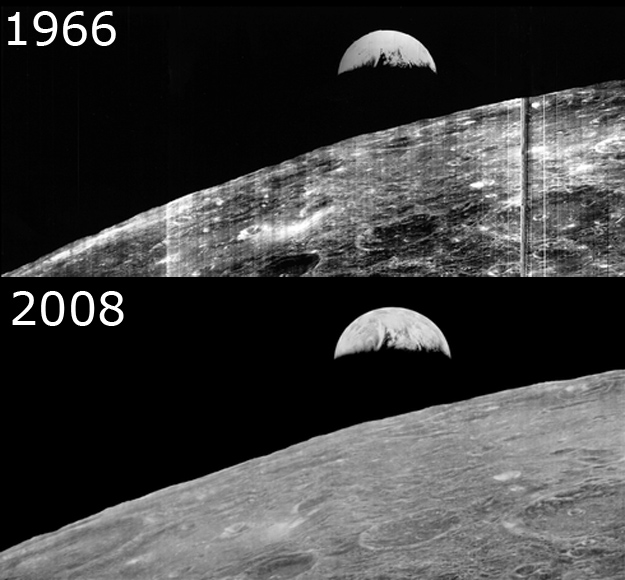 Moffett Field, California – The Lunar Orbiter Image Recovery Project (LOIRP) is seeking support from the public as it continues its efforts to recover and enhance Moon images from the 1960s using modern technology.

Moffett Field, California – The Lunar Orbiter Image Recovery Project (LOIRP) is seeking support from the public as it continues its efforts to recover and enhance Moon images from the 1960s using modern technology.

The LOIRP was started with funding by several volunteers in 2008. The original volunteer effort was followed by financial support from NASA which has now been exhausted. The project continues with private support. While the LOIRP more than met the requirements of initial funding, the LOIRP has not been able to retrieve all of the images – yet. This is where the public’s help is needed.

Five Lunar Orbiter missions were sent to the Moon between 1966-67 to map the lunar surface to help select landing sites for Apollo human missions. The LOIRP managed to obtain original tape drives from the 1960s (covered in dust in a farmer’s barn) and a full set of original Lunar Orbiter analog data tapes (threatened with erasure) containing all images sent back to Earth by the five spacecraft. None of this had been functional or usable since the late 1960s.

From the onset the LOIRP has been run on a shoestring budget. Housed in an abandoned McDonalds restaurant at Moffett Field, California, the LOIRP team used spare parts bought on eBay, developed new hardware reverse-engineered from math equations in original documentation, modern laptops, the expertise of retired engineers and scientists, and the dedication of young students.

With this unlikely assembly of people and hardware the LOIRP has been able to retrieve Lunar Orbiter images with far more resolution and dynamic range than was possible in the 1960s. Indeed, many of the images we have retrieved exceed what the Lunar Reconnaissance Orbiter (LRO) is sending back from the Moon today. Among the images we have given new life to are the iconic “Earth rise” image and the so-called “picture of the century”, an oblique view inside crater Copernicus.

After five years the LOIRP has optimized its hardware, software, and procedures so as to achieve an efficiency far greater than it initially possessed. More images still need to be retrieved and enhanced. In addition, the LOIRP needs to generate a formal submission of all images to the Planetary Data Archive. The public can help the LOIRP build upon a proven record of accomplishment and complete its task by donating to this program at RocketHub at http://www.rockethub.com/projects/14882-lunar-orbiter-image-recovery-project

More information about the Lunar Orbiter Image Recovery Project can be found at http://www.moonviews.com