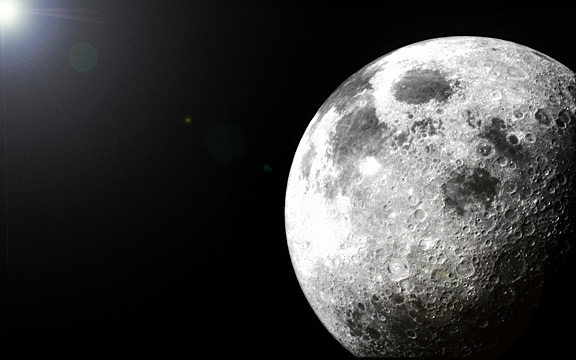 A team of NASA-funded researchers has measured for the first time water from the moon in the form of tiny globules of molten rock, which have turned to glass-like material trapped within crystals. Data from these newly-discovered lunar melt inclusions indicate the water content of lunar magma is 100 times higher than previous studies suggested.

A team of NASA-funded researchers has measured for the first time water from the moon in the form of tiny globules of molten rock, which have turned to glass-like material trapped within crystals. Data from these newly-discovered lunar melt inclusions indicate the water content of lunar magma is 100 times higher than previous studies suggested.

The inclusions were found in lunar sample 74220, the famous high-titanium “orange glass soil” of volcanic origin collected during the Apollo 17 mission in 1972. The scientific team used a state-of-the-art ion microprobe instrument to measure the water content of the inclusions, which were formed during explosive eruptions on the moon approximately 3.7 billion years ago.

The results published in the May 26 issue of Science Express raise questions about aspects of the “giant impact theory” of how the moon was created. That theory predicted very low water content of lunar rock due to catastrophic degassing during the collision of Earth with a Mars-sized body very early in its history.

The study also provides additional scientific justification for returning similar samples from other planetary bodies in the solar system.

“Water plays a critical role in determining the tectonic behavior of planetary surfaces, the melting point of planetary interiors and the location and eruptive style of planetary volcanoes,” said Erik Hauri, a geochemist with the Carnegie Institution of Washington and lead author of the study. “I can conceive of no sample type that would be more important to return to Earth than these volcanic glass samples ejected by explosive volcanism, which have been mapped not only on the moon but throughout the inner solar system.”

In contrast to most volcanic deposits, the lunar melt inclusions are encased in crystals that prevent the escape of water and other volatiles during eruption.

“These samples provide the best window we have on the amount of water in the interior of the moon where the orange glass came from,” said science team member James Van Orman of Case Western Reserve University in Cleveland.

In a 2008 study led by Alberto Saal of Brown University in Providence, R.I., the same team reported the first evidence of water in lunar volcanic glasses. They used magma degassing models to estimate how much water was originally in the magmas before eruption. Building on that study, a Brown undergraduate student, Thomas Weinreich, searched for and found the melt inclusions. With that data, the team measured the pre-eruption concentration in the magma and estimated the amount of water in the moon’s interior.

“The bottom line is that in 2008, we said the primitive water content in the lunar magmas should be similar to lavas coming from the Earth’s depleted upper mantle,” Saal said. “Now, we have proven that is indeed the case.”

The study also puts a new twist on the origin of water-ice detected in craters at the lunar poles by several recent NASA missions. The ice has been attributed to comet and meteor impacts, but the researchers believe it is possible that some of the ice came from water released by the eruption of lunar magmas eons ago.

The NLSI is a virtual organization enabling collaborative, interdisciplinary research in support of agency lunar science programs. The researchers are members of NLSI teams from the Southwest Research Institute in San Antonio and Brown. The institute uses technology to bring scientists together around the world, and it is comprised of seven competitively selected U.S. teams and several international partners. NASA’s Science Mission and Exploration Systems Mission Directorates in Washington fund the institute.

For more information about the NLSI, visit: http://lunarscience.nasa.gov