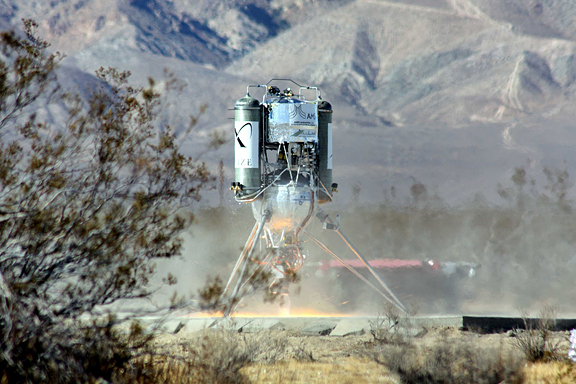 The race for the $2 million Northrop Grumman Lunar Lander X PRIZE Challenge (NGLLXPC) incentivized prize purse, funded by NASA and presented by the X PRIZE Foundation, has come to an exciting finish. Masten Space Systems, led by David Masten, will be awarded the top $1 million prize on Nov. 5 in Washington D.C. at the Rayburn House Office Building. This is the largest incentivized prize awarded by the X PRIZE Foundation since the 2004 Ansari X PRIZE competition.

The NGLLXPC rocket race literally came down to the wire. Masten Space Systems, along with other competing teams descended upon the Mojave Desert last week in a head-to-head showdown. The Masten team set out to chase down Armadillo Aerospace for the Level 2, first-place prize of $1 million. On Oct. 30, in their final attempt, Masten Space Systems successfully launched their ‘Xoie’ vehicle and achieved an average landing accuracy of 19 cm to beat Armadillo Aerospace’s previous accuracy mark of 87 cm. According to competition officials the Masten team achieved accurate landings and won the first-place prize for Level 2 of the NGLLXPC. Armadillo Aerospace, led by id Software founder John Carmack will take home the second place prize of $500,000.

“We are all very excited to have David Masten and John Carmack take the top prizes in the 2009 Northrop Grumman Lunar Lander X PRIZE Challenge. It is an honor to award these teams $2 million in prize money,” said Dr. Peter H. Diamandis, chairman and CEO of the X PRIZE Foundation. “This space race was exciting to watch and experience, as these dedicated teams raced to advance space technology. It is clear that the emerging space industry will continue to benefit from the Northrop Grumman Lunar Lander X PRIZE Challenge.”

The criterion for the Level 2 NGLLXPC requires the rocket to simulate a full lunar lander mission. The flight profile must closely simulate the task of descending from lunar orbit to the lunar surface, refueling and returning to lunar orbit. To match the performance of such a mission here on Earth, the vehicle must fly along a proscribed mission profiled designed to show both control and power, ascending to a height of 50 meters, translating horizontally to a landing pad 50 meters away, landing safely on a rocky lunar-replica surface after at least 180 seconds of flight time. The flight profile must be repeated, with the rocket demonstrating repeat-use capability by returning to the original launch site.

Since the NGLLXPC competition launched in 2006, one dozen teams have worked to design rockets capable of being used as part of Moon 2.0, a new era of international and sustainable lunar exploration that draws on both government and private involvement. These rocket designs have already found additional missions, with competing teams already carrying out important development work for NASA, the US Department of Defense, and a variety of private and academic customers. Throughout the competition NASA put up $2 million in prize money as part of their Centennial Challenges program. The NGLLXPC was comprised of two levels; each level included both first and second place prizes. The $350,000 first-place prize for Level 1 went to Armadillo Aerospace at last year’s competition. Masten Space Systems will take home the second-place prize of $150,000 in the Level 1 portion of the challenge.

The NGLLXPC was operated by the X PRIZE Foundation at no cost to NASA. This was made possible by the generous support of Northrop Grumman Corporation, which built the original Apollo Lunar Modules used to safely carry crew down to the lunar surface in the 1960s and 1970s. Northrop Grumman supported the competition throughout the four years in which it was offered.

The ultimate goal of the NGLLXPC is to inspire entrepreneurs who can enable a new era of commercial exploration. These milestone events within the privately funded space sector continue to demonstrate the value of prizes and how they stimulate innovation. The successful flights from all of the private space companies continue to underscore the report to President Obama by the Augustine Commission, which called for increased commercial sector participation both in orbital operations and NASA’s efforts to reach the Moon by 2020. Now, more than ever, the time is right for private industry to supply NASA with hardware and services to enable suborbital, orbital, and lunar exploration. 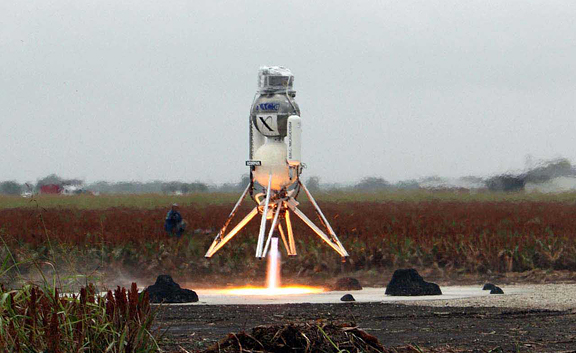 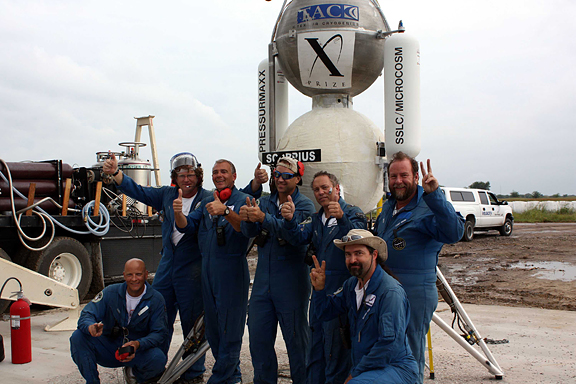 Caption: The Armadillo Aerospace team, led by John Carmack next to their rocket, Scorpius after the successful completion of Level 2 of the NGLLXPC in Caddo Mills, TX 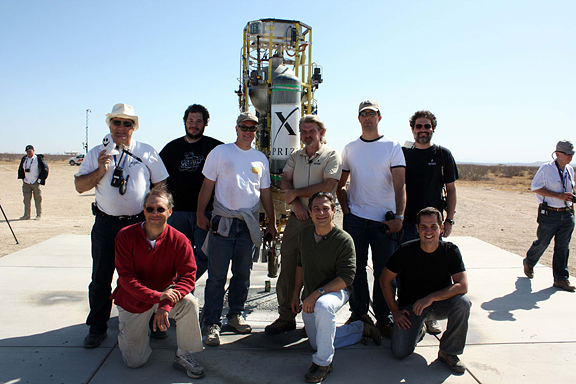