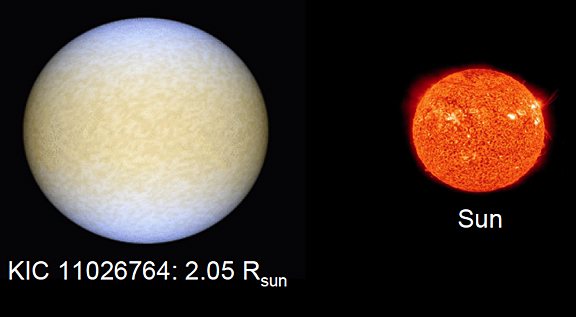 An international cadre of scientists that used data from NASA’s Kepler spacecraft announced Tuesday the detection of stellar oscillations, or “starquakes,” that yield new insights about the size, age and evolution of stars.

An international cadre of scientists that used data from NASA’s Kepler spacecraft announced Tuesday the detection of stellar oscillations, or “starquakes,” that yield new insights about the size, age and evolution of stars.

The results were presented at a news conference at Aarhus University in Denmark by scientists representing the Kepler Asteroseismic Science Consortium (KASC). The team studied thousands of stars observed by Kepler, releasing what amounts to a roster of some of humanity’s most well-characterized stars.

Analysis of stellar oscillations is similar to how seismologists study earthquakes to probe the Earth’s interior. This branch of science, called astroseismology, produces measurements of stars the Kepler science team is anxious to have.

“Using the unparalleled data provided by Kepler, KASC scientists are quite literally revolutionizing our understanding of stars and their structures,” said Douglas Hudgins, Kepler Program Scientist at NASA Headquarters in Washington. “What’s more, they are doing so at no cost to the American taxpayer. All the KASC scientists are supported by research funding from their home countries. It is a perfect illustration of the tremendous value that our international partners bring to NASA missions.”

In the results presented Tuesday, one oscillating star took center stage: KIC 11026764 has the most accurately known properties of any star in the Kepler field. In fact, few stars in the universe are known to similar accuracy. At an age of 5.94 billion years, it has grown to a little over twice the diameter of the sun and will continue to do so as it transforms into a red giant. The oscillations reveal that this star is powered by hydrogen fusion in a thin shell around a helium-rich core.

“We are just about to enter a new area in stellar astrophysics,” said Thomas Kallinger, lead author on a study of red giant stars and postdoctoral fellow at the Universities of British Columbia and Vienna. “Kepler provides us with data of such good quality that they will change our view of how stars work in detail.”

KASC scientists also reported on the star RR Lyrae. It has been studied for more than 100 years as the first member of an important class of stars used to measure cosmological distances. The brightness, or light wave amplitude, of the star oscillates within a well-known period of about 13.5 hours. Yet during that period, other small cyclic changes in amplitude occur — behavior known as the Blazhko effect.

The effect has puzzled astronomers for decades, but thanks to Kepler data, scientists may have a clue as to its origin. Kepler observations revealed an additional oscillation period that had never been previously detected. The oscillation occurs with a time scale twice as long as the 13.5-hour period. The Kepler data indicates the doubling is linked to the Blazhko effect.

“Kepler data ultimately will give us a better understanding of the future of our sun and the evolution of our galaxy as a whole,” said Daniel Huber, lead author on one of the KASC studies.

Launched in March 2009, Kepler was designed to discover Earth-size planets orbiting other stars. The spacecraft uses a huge digital camera, known as a photometer, to continuously monitor the brightness of more than 150,000 stars in its field of view as it orbits around the sun. Kepler searches for distant worlds by looking for “transits,” when a planet passes in front of a star, briefly causing it to dim. The amount of dimming reveals the size of the planet compared to the size of the star.

For more information about the findings by the KASC scientists, visit: http://astro.phys.au.dk/KASC/