NASA’s current slogan is “Forward To The Moon”. They say this because they do not want to say “Back To The Moon” Isn’t about time for NASA to speak boldly about what it plans to do?
During the Vision for Space Exploration (VSE) era after the loss of Columbia NASA Administrator Sean O’Keefe created an Exploration Directorate separate from the directorate that operated the space shuttle and ISS – on purpose. He wanted the new stuff to not be bound by the status quo. Adm. Craig Steidle was recruited to run the show. Whatever commercial things NASA does now had their seeds in what Steidle and O’Keefe did. This all came apart when O’Keefe left, and Mike Griffin came in and threw everything new and innovative out to do his “Apollo on steroids thing”. President Obama later gutted that only to bring it partially back. NASA now deals with the remnants of these roller coaster decisions.

Keith’s update: To be clear about how this all happened, NASA Deputy Administrator Fred Gregory was actually the prime mover behind the creation of a separate exploration entity within NASA focused on (you guessed it) exploration. He created a group looking into how to facilitate exploration thinking, hired Adm. Craig Steidle, and then pitched a plan to Sean O’Keefe. Fred also found and recruited Gen. Michael Kostelnik to become the program director of human space flight with the hope of breaking down the field center sand piles and to pull Space Station and Space Shuttle programs closer together. This was an enlightened series of steps taken by Fred and would be well worth revisiting today since the stovepipes within NASA human spaceflight were quickly reassembled.

During that time when the VSE was seen as a refreshing recommitment to exploration post-Columbia – there was a momentary alliance between all factions. People thought bold adventurous thoughts again. Back to the Moon and then on to Mars. Craig was looking to do some branding and meme generation. He hit on one thing that was really ballsy. He read a lot of Greek classics as military people are want to do. And he found his catch phrase. He created a motto – for a patch and logo that Mike Okuda (who worked on Star Trek) created. (Larger image) The motto was “Fortuna Audaces Juvat“ which is usually translated as a variant of “Fortune favors the bold” – a latin proverb most prominently repeated in Virgil’s “Aeneid” at 10.284. You have no doubt seen this phrase before. Its common in the military – for good reasons. It has a Star Trek vibe to it. Craig Steidel drew a line in the sand and provided a motto to wear on one’s shoulders as the agency set forth back into space. I thought it was a master stroke. Too bad NASA doesn’t do things like this any more. 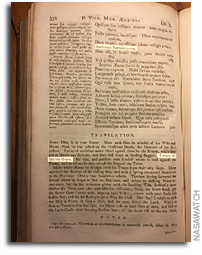 In the course of writing my next book I came to reference this phrase and thought I’d see if my antique book collection could help me find an old reference. In this case I found one in a 1792 publication – translated as “fortune assists the brave”. Close enough. (larger image)

Jim Bridenstine often ends many official statements with “Ad Astra” (“to the stars”) which is taken from another Latin phrase common in exploration and military history “Per aspera ad astra/ ad astra per aspera“ (“through hardships to the stars”). Alas, NASA is now going to try and do some exciting stuff in space again by going “Forward to the Moon” to quote Bridenstine’s official favorite phrase.

Ugh. That’s certainly underwhelming. Why not “Back To The Moon and then Beyond?” or “Go boldly where no(one) has gone before”? you know – something a little more inspiring?