Today an iconic image from the initial exploration of the Moon is being re-released showing detail that could not have been seen using technology available at the time the photo was taken. This image features a dramatic view inside the majestic crater Copernicus – a view that left millions in awe when it was first released.
This image is being announced at the First Global Space Exploration Conference, co-sponsored by the AIAA and IAF, in Washington, DC.

Between 1966 and 1967 NASA sent five Lunar Orbiter spacecraft to the Moon. Their job was to survey the surface to help determine landing sites for the upcoming Apollo missions. In addition to their recon role, these spacecraft also contributed to the nascent scientific understanding of the Moon. But every once in a while these spacecraft also served as artists, snapping photos of this nearby world in a way that human eyes had never been able to see before.

Once such image was taken of crater Copernicus on 24 November 1966 by the Lunar Orbiter 2 spacecraft. What made this photo so unique was the oblique angle it was taken at as well the close proximity of the spacecraft to its target. The image was taken at an altitude of 45 km (27.1 miles) at a distance of approximately 207.7 km (~125 miles) from the center of the crater. Instead of looking down, the spacecraft looked sideways at the Moon.

For the first time people saw the Moon as a world with mountains and boulders and other features (some of them strange) that were not apparent from photos where the view was looking straight down. So taken were people at the time that Life Magazine took to calling the photo “The Picture of the Century”. Along with the equally famous Earthrise image taken by Lunar Orbiter 1, the Moon went from being a distant sight in the sky to a world waiting to be explored – in person.

At the time that the images were taken using film that was actually developed aboard the spacecraft in lunar orbit, the ability to send back imagery was nothing like it is today. The photos were scanned much like news photos of the day and the data was sent back to Earth. The images were then printed out on photo graphic paper and used to construct maps of the lunar surface. In so doing a lot of data from the original photos was lost. Luckily NASA had the foresight to listen to the suggestions of project engineers such as Charles Byrne and stored the original data on analog tapes.

Some 40 years after these missions were completed the Lunar Orbiter Image Recovery Project (LOIRP) was begun with the intent of using refurbished tape drives and a complete set of original project tapes (over 1,500). Utilizing funding from NASA, facilities offered by NASA Ames Research Center, and donated effort and resources from SkyCorp Inc. and SpaceRef Interactive Inc., the LOIRP team was able to return the original drives to operation such that the data on the tapes could be accessed.

By adding modern computer interfaces and data handling techniques, the LOIRP was able to scan and record the data in ways that simply could not have been accomplished in the 1960s. As a result the images that were obtained had a much higher resolution and dynamic range than had been seen to date. Indeed, in many cases, these images often rival or exceed images taken by the Lunar Reconnaissance Orbiter which is currently surveying the Moon.

This project is multi-generational in many ways. The tape drives use original parts and modern components and are connected to monitoring equipment that is itself decades old. All of this is connected to Mac desktop computers running of the shelf software. There are some special tools. Some of the software LOIRP now uses to process these images was written by Charles Byrne – the very same person who suggested that these images be stored on data tapes over 40 years ago.

LOIRP also involves the participation of young people such as Austin Epps and Neulyn Moss in the process of generating and analyzing the images. LOIRP also has a regular series of local students working as interns to assist the project.

It is important to remember that as we look toward the Moon, Mars and other places as future destinations that we are not the first generation to do so. In the 1960s people had the same dreams – and they acted upon them with simpler tools than we have today. There is a lot to be gained from talking to people from that era. They have more than just memories of these days. Unlike many of us today, they know how to actually make their dreams become reality. That advice is timeless and is something that needs to be passed on to a new generation. We take it very seriously at LOIRP. Indeed, had we not done so, we’d never have retrieved these images. 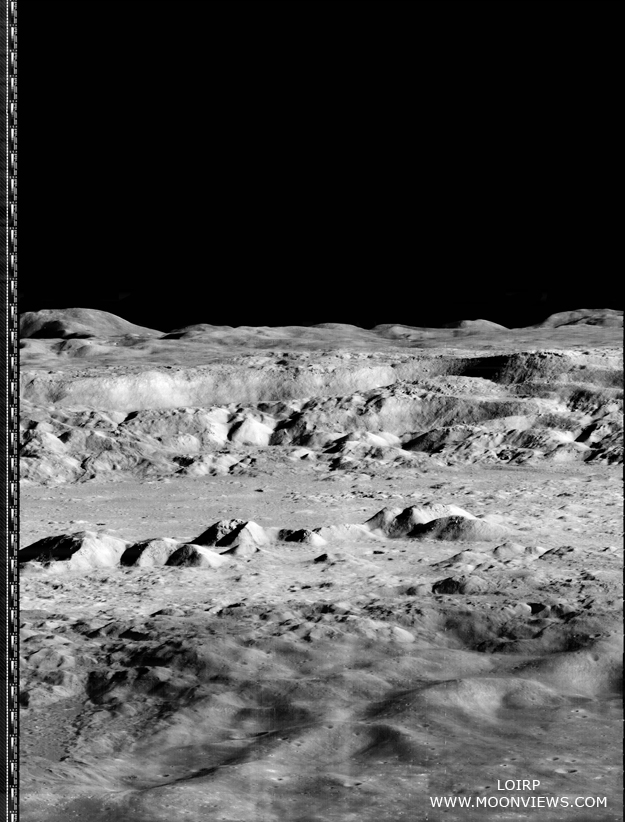 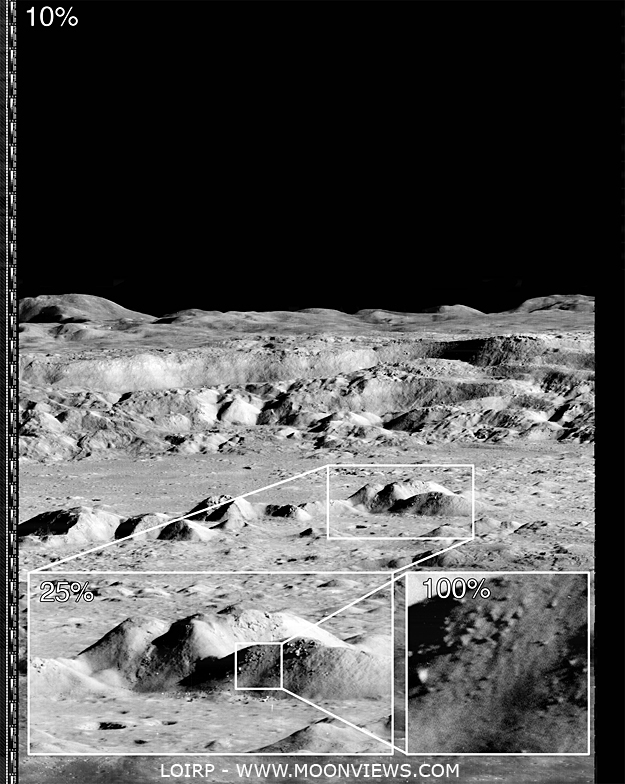 Image: This image shows the magification that is possible with the LOIRP image recovery process (larger image) Credit: LOIRP 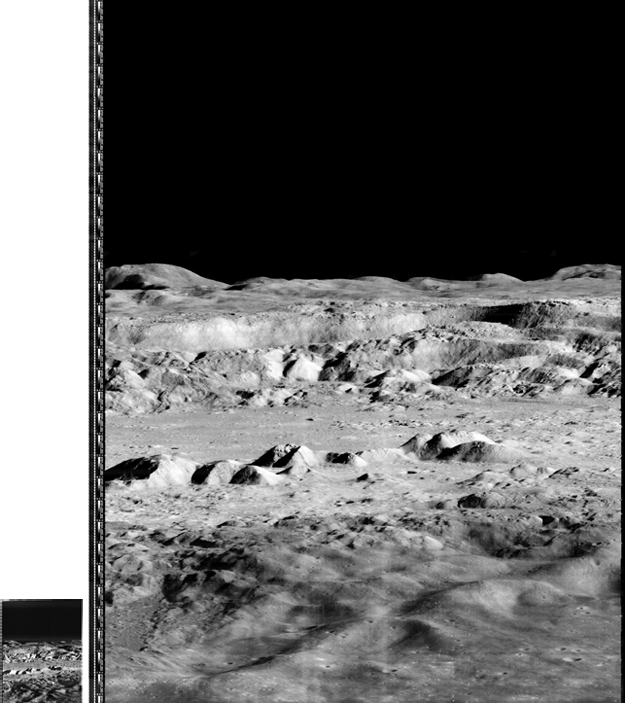 Image: If you take the highest resolution image that is available on the LPI Lunar Orbiter site and compare it with the new LOIRP image, the increase in size becomes obvious. Credit: LOIRP

Image: The amount of detail that the new image reveals is clear. Not only is the resolution much higher, but the dynamic range is greater so as to allow gradations in surface texture, shadows, etc. to be much more clearly pronounced (larger image). Credit: LOIRP