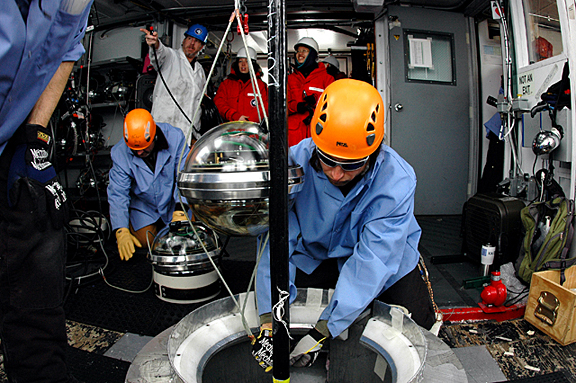 Peter Rejcek, Antarctic Sun Editor: The conflicting emotions were palpable in the crowded drill tower where all eyes and cameras were on the basketball-sized instrument latched onto a cable. The shout “DOMs away” would send it and the rest of the 59 digital optical modules on the string deep into the ice sheet below the South Pole Station.

Peter Rejcek, Antarctic Sun Editor: The conflicting emotions were palpable in the crowded drill tower where all eyes and cameras were on the basketball-sized instrument latched onto a cable. The shout “DOMs away” would send it and the rest of the 59 digital optical modules on the string deep into the ice sheet below the South Pole Station.

The command had been uttered hundreds of times since the IceCube Neutrino Observatory project had sent its first string of detectors down a 2.5-kilometer-deep hole in the ice on Jan. 29, 2005.

But on Dec. 18, 2010 (local New Zealand time), there was an air of reluctance, even as the anticipation and excitement built. This was the 86th and final string deployment for the subglacial neutrino detector, marking the culmination of seven seasons of construction at the U.S. Antarctic Program’s southernmost research station.

“It’s been a long ride. It was hard to imagine at the time when we started in the early AMANDA days … None of us believed we would make it this far,” said Albrecht Karle, associate director of science and instrumentation at the University of Wisconsin-Madison, referring to a precursor experiment to IceCube in the 1990s.

But they did make it. About 4:12 p.m., the last DOM disappeared down the hole created by a powerful hotwater drill the day before. And at two minutes before 6 p.m. the final string was secured at the surface until the hole refreezes, entombing the modules forever.

“It’s bittersweet,” said Dennis Duling, IceCube drill manager in charge of the operation and maintenance of the equipment required to bore deep holes into the world’s highest and biggest ice sheet.

“Damn glad it’s done. It’s a lot of work. It’s tiring. It’s a good, hard pace throughout the season. But I’m going to hate to see it end. I’m working with the best people on Earth,” added Duling, who has been on site for all 86 holes.

The National Science Foundation, which manages the U.S. Antarctic Program, contributed $242 million toward the total project cost of $279.5 million — representing the most expensive and complex experiment ever attempted in Antarctica.

An array a cubic kilometer in size with more than 5,000 specially designed photomultipliers, IceCube is mind-boggling big, looking for something inconceivably small — a subatomic particle called a neutrino.

The most abundant particle in the universe aside from photons (light particles), high-energy neutrinos result from violent events in the far-flung corners of the universe, such as exploding stars or by the formation of black holes.

Physicists believe neutrinos contain information about such high-energy events thanks to their ability to make a straight beeline through the universe without changing course. IceCube can help scientists trace the neutrinos back to their place of origin by capturing the incredibly brief interaction of the particles with other atoms as they speed through ice.

The collision produces another particle called a muon, which leaves a trail of blue light in its wake. It’s that flash of light that IceCube captures, using strings of DOMs frozen in the ice sheet between 1.45 and 2.45 kilometers below the surface where the ice is exceptionally clear.

“It’s a discovery machine; it’s a discovery instrument. They could not guarantee, as we built it, we would immediately get something we would expect to get,” explained Vladimir Papitashvili, program director for Antarctic Aeronomy and Astrophysics at NSF’s Office of Polar Programs.

“I think it’s an excellent investment. The results could be absolutely fantastic, something that could be completely unexpected,” Papitashvili added.

In fact, even though major construction was just completed, and the final seven strings that were installed this season won’t be fully online until May 2011, the neutrino telescope has been taking data for several years now.

Recently, IceCube scientists detected an unusual pattern in cosmic ray intensity toward the Earth’s Southern Hemisphere, with an excess of cosmic rays detected in one part of the sky and a deficit in another. A similar lopsidedness, called “anisotropy,” has been seen from the Northern Hemisphere by other cosmic ray experiments.

One possible explanation for the irregular pattern is the remains of an exploded supernova in the Milky Way Galaxy.

Additionally, IceCube is recording more than 10,000 neutrinos per year coming from the interaction of the cosmic ray-charged particles within the Earth’s atmosphere. But very few of these neutrinos, especially those discovered coming through the Earth from the Northern Hemisphere, are the high-energy particles that the telescope was designed to detect.

Jens Dreyer, one of two IceCube personnel who will spend the winter at the South Pole to operate the experiment during the dark, cold months in 2011, said he’s been fortunate to see one such event.

In the previous winter, his predecessors only detected three during the eight months of winter isolation.

“The more energetic an event, the more rare it is,” Dreyer said.

That such an experiment could even be attempted is an equally rare event. And it all started more than 20 years ago.

In 1987, Francis Halzen, the principal investigator on IceCube at UW-Madison, wrote the first paper on the idea of using Antarctic ice as a medium to ensnare neutrinos. Other physicists had been trying to use DOM-like instruments in water, but Halzen believed ice would work better than the ocean.

It then took about 10 years to make the now-famous AMANDA experiment work. Construction of the Antarctic Muon and Neutrino Detector Array was a sort of proof of concept for IceCube. The first detector string for AMANDA went down into South Pole ice in 1993. Four years later, AMANDA recorded the first-ever precision map of a high-energy neutrino event.

That’s about the time when Karle got involved.

“The most important thing was that it proved this was possible: To use ice as a medium and — what seemed to be a crazy idea — to put sensors 2.5 kilometers underneath the ice,” he said.

Still, even with the success of AMANDA, the proposal to build IceCube seemed daunting to many.

Remember that the South Pole Station is at the bottom of the world, requiring most materials and fuel to be flown across the continent aboard LC-130 aircraft operated by the New York Air National Guard. The field season is short — scarcely more than three months — with time available for drilling even shorter based on the effort required to unpack and repack the drill camp every year.

“It’s amazing we were able to do it. Back in the AMANDA days, we wouldn’t have thought it would have been possible to put in 86 strings in that sort of time,” said Gary Hill, a physicist and lead DOM deployer from Australia.

“There’s a big sense of satisfaction that we were able to pull it off in the end,” he added. “Now we look forward to seeing the data that comes from it. It’s a mixture of emotions, but positive. It’s time to move on with it.”

Duling also dates his involvement with IceCube back to the AMANDA days, an effort in the mid 1990s that resulted in 19 strings at more shallow depths.

The hotwater drill camp for the bigger and deeper IceCube array consists of a set of modular buildings, appearing like a pair of cargo trains frozen to the ice. A web of hoses runs between the parallel buildings, heating and transporting thousands of gallons of water. The system includes its own Rod well, a sort of underground aquifer of water in the ice that is maintained by hot water circulation.

At the end of the system is a 10,000-kilogram hose, which shoots water out at 750 liters per minute at a temperature of 88 degrees Celsius. It takes about 75,000 liters of water to melt a hole wide and deep enough for each string of detectors. This all happens at a place where even summertime temperatures rarely reach above minus 20 degrees Celsius.

“The South Pole is one of the worst places to run hotwater, or water of any kind, through a pipe,” Duling said. “It takes a lot of people and a lot of equipment.”

The “discovery machine” is a multifaceted tool. Originally designed to look downward as neutrinos shot through the Earth from the Northern Hemisphere — using the planet as a natural filter — the IceCube array can also look above to the south.

The primary tool for looking at cosmic rays (energetic subatomic particles) from the Southern Hemisphere is IceTop. The University of Delaware led the effort to build the surface array, which consists of 162 tanks of clear, frozen water — two tanks above each detector string.

“It’s a big cosmic ray detector,” said James Roth with the University of Delaware. His team installed the last 2,200-liter IceTop tank, each of which holds two half-submerged DOMs, about a week before the final string deployment.

The frozen water in each tank is as clear as that deep in the ice sheet. His team uses an instrument at the bottom of the tank to remove the dissolved gases that cause the bubbles that cloud the ice. A little pond pump circulates the water through the apparatus.

“It’s constantly removing the dissolved gases, and therefore we get perfectly clear ice,” said Roth, who has overseen the installation of all 162 IceTop tanks over the last seven seasons. Thomas Gaisser at the University of Delaware is the scientific leader for the surface array.

“I’m glad I was able to see it through and see it to the end. I’m excited that all of the tanks are filled now and things are freezing,” Roth said, explaining that it takes about 50 days for a tank to freeze completely freeze at the South Pole.

“It’s a little sad to know that this great group of people I’ve worked with for so long won’t be back here next year,” he added.

That may not entirely be the case.

Work has already begun on a prototype for a different type of neutrino observatory at the South Pole that will detect even higher energy particles than IceCube.

But instead of relying on Cherenkov light — the fleeting pulse of blue light in the ice — the proposed Askaryan Radio Array will search for radio waves produced by neutrino interactions in the ice. The radio pulses come from the particle showers produced when the neutrino converts its energy into matter.

One radio test bed system, consisting of an antenna system on the snow surface, will be installed this season. The actual radio array, if funded, would be on a far larger scale than IceCube.

“There are many ideas under way for how to use IceCube,” said Karle, the principal investigator on the Askaryan Radio Array project. “Once you create a reality like IceCube — something big — it opens the door [for more ideas].”

Fitting, considering IceCube proposes to open a new window on our universe.

“We now have a new decade ahead of us when exciting discoveries might come,” Papitashvili said.