How to Learn a Star’s True Age 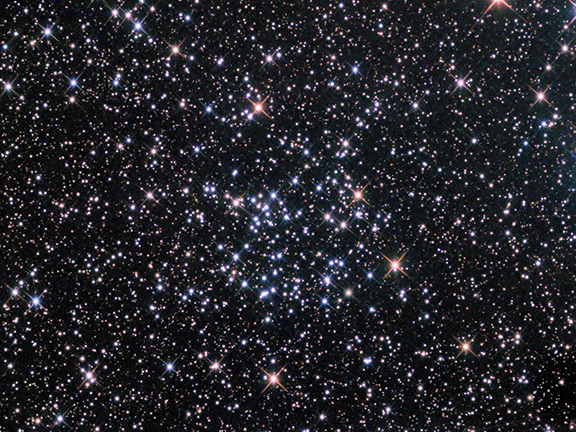 For many movie stars, their age is a well-kept secret. In space, the same is true of the actual stars. Like our Sun, most stars look almost the same for most of their lives. So how can we tell if a star is one billion or 10 billion years old? Astronomers may have found a solution — measuring the star’s spin.

For many movie stars, their age is a well-kept secret. In space, the same is true of the actual stars. Like our Sun, most stars look almost the same for most of their lives. So how can we tell if a star is one billion or 10 billion years old? Astronomers may have found a solution — measuring the star’s spin.

“A star’s rotation slows down steadily with time, like a top spinning on a table, and can be used as a clock to determine its age,” says astronomer Soren Meibom of the Harvard-Smithsonian Center for Astrophysics.

Meibom presented his findings today in a press conference at the 218th meeting of the American Astronomical Society.

Knowing a star’s age is important for many astronomical studies and in particular for planet hunters. With the bountiful harvest from NASA’s Kepler spacecraft (launched in 2009) adding to previous discoveries, astronomers have found nearly 2,000 planets orbiting distant stars. Now, they want to use this new zoo of planets to understand how planetary systems form and evolve and why they are so different from each other.

“Ultimately, we need to know the ages of the stars and their planets to assess whether alien life might have evolved on these distant worlds,” says Meibom. “The older the planet, the more time life has had to get started. Since stars and planets form together at the same time, if we know a star’s age, we know the age of its planets too.”

Learning a star’s age is relatively easy when it’s in a cluster of hundreds of stars that all formed at the same time. Astronomers have known for decades that if they plot the colors and brightnesses of the stars in a cluster, the pattern they see can be used to tell the cluster’s age. But this technique only works on clusters. For stars not in clusters (including all stars known to have planets), determining the age is much more difficult.

Using the unique capabilities of the Kepler space telescope, Meibom and his collaborators measured the rotation rates for stars in a 1-billion-year-old cluster called NGC 6811. This new work nearly doubles the age covered by previous studies of younger clusters. It also significantly adds to our knowledge of how a star’s spin rate and age are related.

If a relationship between stellar rotation and age can be established by studying stars in clusters, then measuring the rotation period of any star can be used to derive its age — a technique called gyrochronology (pronounced ji-ro-kron-o-lo-gee). For gyrochronology to work, astronomers first must calibrate their new “clock.”

They begin with stars in clusters with known ages. By measuring the spins of cluster stars, they can learn what spin rate to expect for that age. Measuring the rotation of stars in clusters with different ages tells them exactly how spin and age are related. Then by extension, they can measure the spin of a single isolated star and calculate its age.

To measure a star’s spin, astronomers look for changes in its brightness caused by dark spots on its surface — the stellar equivalent of sunspots. Any time a spot crosses the star’s face, it dims slightly. Once the spot rotates out of view, the star’s light brightens again. By watching how long it takes for a spot to rotate into view, across the star and out of view again, we learn how fast the star is spinning.

The changes in a star’s brightness due to spots are very small, typically a few percent or less, and become smaller the older the star. Therefore, the rotation periods of stars older than about half a billion years can’t be measured from the ground where Earth’s atmosphere interferes. Fortunately, this is not a problem for the Kepler spacecraft. Kepler was designed specifically to measure stellar brightnesses very precisely in order to detect planets (which block a star’s light ever so slightly if they cross the star’s face from our point of view).

To extend the age-rotation relationship to NGC 6811, Meibom and his colleagues faced a herculean task. They spent four years painstakingly sorting out stars in the cluster from unrelated stars that just happened to be seen in the same direction. This preparatory work was done using a specially designed instrument (Hectochelle) mounted on the MMT telescope on Mt. Hopkins in southern Arizona. Hectochelle can observe 240 stars at the same time, allowing them to observe nearly 7000 stars over four years. Once they knew which stars were the real cluster stars, they used Kepler data to determine how fast those stars were spinning.

They found rotation periods ranging from 1 to 11 days (with hotter, more massive stars spinning faster), compared to the 30-day spin rate of our Sun. More importantly, they found a strong relationship between stellar mass and rotation rate, with little scatter. This result confirms that gyrochronology is a promising new method to learn the ages of isolated stars.

The team now plans to study other, older star clusters to continue calibrating their stellar “clocks.” Those measurements will be more challenging because older stars spin slower and have fewer and smaller spots, meaning that the brightness changes will be even smaller and more drawn out. Nevertheless, they feel up to the challenge.

The paper reporting this research appears in the 20 May 2011 issue of The Astrophysical Journal Letters and is posted online: http://iopscience.iop.org/2041-8205/733/1/L9