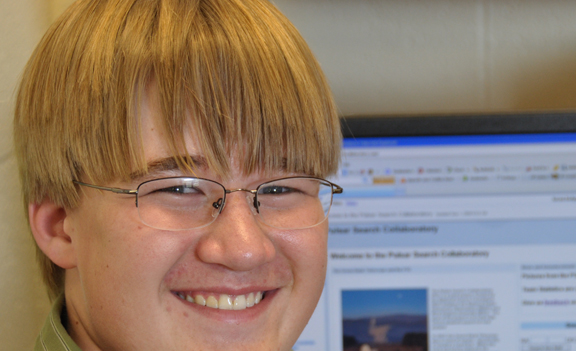 Lucas Bolyard, a sophomore at South Harrison High School in Clarksburg, WV, made the discovery while participating in a project in which students are trained to scrutinize data from the National Science Foundation’s giant Robert C. Byrd Green Bank Telescope (GBT).

The project, called the Pulsar Search Collaboratory (PSC), is a joint project of the National Radio Astronomy Observatory (NRAO) and West Virginia University (WVU), funded by a grant from the National Science Foundation.

Bolyard made the discovery in March, after he already had studied more than 2,000 data plots from the GBT and found nothing.

“I was home on a weekend and had nothing to do, so I decided to look at some more plots from the GBT,” he said. “I saw a plot with a pulse, but there was a lot of radio interference, too. The pulse almost got dismissed as interference,” he added.

Nonetheless, he reported it, and it went on a list of candidates for West Virginia University astronomers Maura McLaughlin and Duncan Lorimer to re-examine, scheduling new observations of the region of sky from which the pulse came. Disappointingly, the follow-up observations showed nothing, indicating that the object was not a normal pulsar. However, the astronomers explained to Bolyard that his pulse still might have come from a rotating radio transient.

Confirmation didn’t come until July. Bolyard was at the NRAO’s Green Bank Observatory with fellow PSC students. The night before, the group had been observing with the GBT in the wee hours, and all were very tired. Then Lorimer showed Bolyard a new plot of his pulse, reprocessed from raw data, indicating that it is real, not interference, and that Bolyard is likely the discoverer of one of only about 30 rotating radio transients known.

Suddenly, Bolyard said, he wasn’t tired anymore. “That news made me full of energy,” he exclaimed.

What Caught His Eye 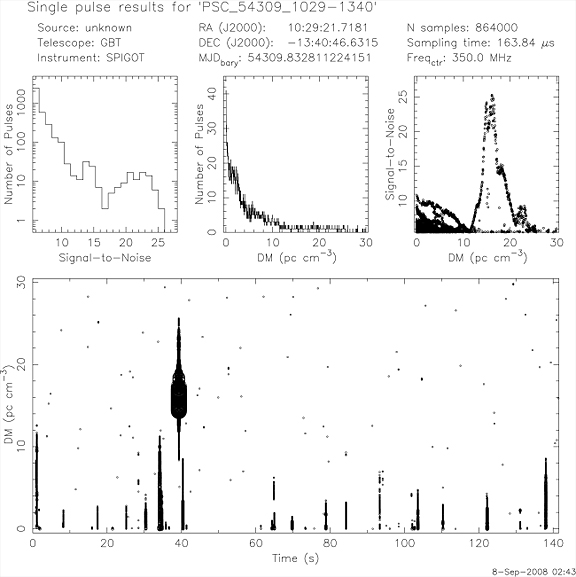 When Lucas Bolyard looked at the bottom plot, he noticed the thick, black blob left of the center. He saw that this signal was positioned on the graph where it indicated a non-zero “dispersion measure,” or DM. Dispersion measure is used by astronomers as an indicator of cosmic distances. The non-zero DM value of this pulse is a clue that the signal came from space, not from Earth. The other blobs on the bottom of the graph are signals at a distance of zero– that is from here on Earth. CREDIT: NRAO/AUI/NSF

Rotating radio transients are thought to be similar to pulsars, superdense neutron stars that are the corpses of massive stars that exploded as supernovae. Pulsars are known for their lighthouse-like beams of radio waves that sweep through space as the neutron star rotates, creating a pulse as the beam sweeps by a radio telescope. While pulsars emit these radio waves continuously, rotating radio transients emit only sporadically, one burst at a time, with as much as several hours between bursts. Because of this, they are difficult to discover and observe, with the first one only discovered in 2006.

“These objects are very interesting, both by themselves and for what they tell us about neutron stars and supernovae,” McLaughlin said. “We don’t know what makes them different from pulsars — why they turn on and off. If we answer that question, it’s likely to tell us something new about the environments of pulsars and how their radio waves are generated,” she added.

The PSC, led by NRAO Education Officer Sue Ann Heatherly and Project Director Rachel Rosen, includes training for teachers and student leaders, and provides parcels of data from the GBT to student teams. The project involves teachers and students in helping astronomers analyze data from 1500 hours of observing with the GBT. The 120 terabytes of data were produced by 70,000 individual pointings of the giant, 17-million-pound telescope. Some 300 hours of the observing data were reserved for analysis by student teams.

For at least one student, the PSC has brought to life the excitement of discovery. “Science is a lot more exciting for me now that I’ve made this discovery,” Bolyard said. Scientific research, he learned, “is a lot of hard work, but it’s worth it!”

A year ago, he said, he wouldn’t have thought of astronomy as a career, but the experience of discovery made astronomy at least a possibility for him. However, he added, “I’m still hoping to be a doctor.”

This release, with video and images, is available online:
http://www.nrao.edu/pr/2009/pulsarstudent