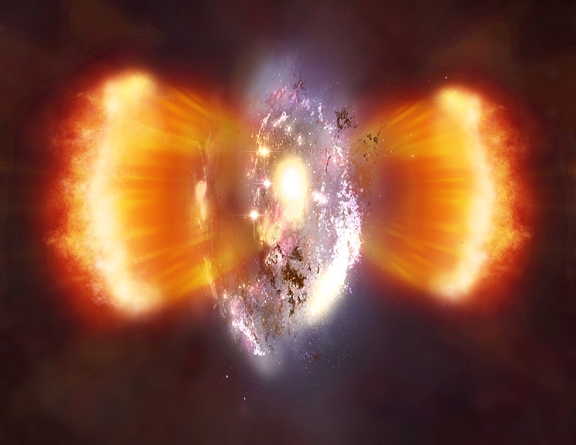 A UK-led international team of astronomers have presented the first conclusive evidence for a dramatic surge in star birth in a newly discovered population of massive galaxies in the early Universe. Their measurements confirm the idea that stars formed most rapidly about 11 billion years ago, or about three billion years after the Big Bang, and that the rate of star formation is much faster than was thought.

A UK-led international team of astronomers have presented the first conclusive evidence for a dramatic surge in star birth in a newly discovered population of massive galaxies in the early Universe. Their measurements confirm the idea that stars formed most rapidly about 11 billion years ago, or about three billion years after the Big Bang, and that the rate of star formation is much faster than was thought.

The scientists used the European Space Agency’s Herschel Space Observatory, an infrared telescope with a mirror 3.5 m in diameter, launched in 2009. They studied the distant objects in detail with the Spectral and Photometric Imaging Receiver (SPIRE) camera, obtaining solid evidence that the galaxies are forming stars at a tremendous rate and have large reservoirs of gas that will power the star formation for hundreds of millions of years.

Dr. Scott Chapman, from the Institute of Astronomy in Cambridge, has presented the new results in a paper in a special edition of the journal Monthly Notices of the Royal Astronomical Society focusing on results from Herschel.

Scott comments “These Herschel-SPIRE measurements have revealed the new population of galaxies to be hotter than expected, due to stars forming far much more rapidly than we previously believed.”

The galaxies are so distant that the light we detect from them has been travelling for more than 11 billion years. This means that we see them as they were about three billion years after the Big Bang. The key to the new results is the recent discovery of a new type of extremely luminous galaxy in the early Universe. These galaxies are very faint in visible light, as the newly-formed stars are still cocooned in the clouds of gas and dust within which they were born. This cosmic dust, which has a temperature of around -240 degrees C, is much brighter at the longer, far infrared wavelengths observed by the Herschel satellite.

A related type of galaxy was first found in 1997 (but not well understood until 2003) using the “SCUBA” camera attached to the James Clerk Maxwell Telescope on Hawaii, which detects radiation emitted at even longer submillimeter wavelengths. But these distant “submillimeter galaxies” were thought to only represent half the picture of star formation in the early Universe. Since SCUBA preferentially detects colder objects, it was suggested that similar galaxies with slightly warmer temperatures could exist but have gone largely unnoticed.

Dr. Chapman and others measured their distances using the Keck optical telescope on Hawaii and the Plateau de Bure submillimeter observatory in France, but were unable to show that they were in the throes of rapid star formation.

Herschel is the first telescope with the capability to detect these galaxies at the peak of their output, so Dr. Chapman joined forces with the “HerMES” team, led by Professor Seb Oliver of the University of Sussex and Dr. Jamie Bock in Caltech who were undertaking the largest survey of galaxies with Herschel.

With the Herschel observations, focused on around 70 galaxies in the constellation of Ursa Major, the scientists acquired the missing piece of evidence to confirm that these galaxies represent a crucial episode in the build up of large galaxies around us today, such as our own Milky Way.

Team member Professor Rob Ivison from the University of Edinburgh explains the significance of the new results. “With the data we had before, we couldn’t tell exactly where the infrared light from these galaxies comes from. But using SPIRE we can see that this is the signature of star formation”.

The new galaxies have prodigious rates of star formation, far higher than anything seen in the present-day Universe. They probably developed through violent encounters between hitherto undisturbed galaxies, after the first stars and galaxy fragments had already formed. None the less, studying these new objects gives astronomers an insight into the earliest epochs of star formation after the Big Bang.

Team colleague Dr. Isaac Roseboom from the University of Sussex sums up the work. “It was amazing and surprising to see the Herschel-SPIRE observations uncover such a dramatic population of previously unseen galaxies”. Professor Seb Oliver, also from Sussex, adds: “We are really blown away by the tremendous capability of Herschel to probe the distant universe. This work by Scott Chapman gives us a real handle on how the cosmos looked early in its life.”

With the new discovery, the UK-led astronomers have provided a much more accurate census of some of the most extreme galaxies in the Universe at the peak of their activity. Future observations will investigate the details of the galaxies’ power source and try to establish how they will develop once their intense bursts of activity come to an end.

An artist’s impression of the heart of one of the newly-discovered galaxies and a Herschel-SPIRE image of some of the galaxies can be downloaded here: http://www.ast.cam.ac.uk/~schapman/ofrg.html

Herschel is an ESA space observatory with science instruments provided by European-led Principal Investigator consortia and with important participation from NASA. Since launch on 14th May 2009, Herschel spent several months of performance verification, including observing optimization and instrument calibration. This was followed by the Science Demonstration Phase: the period when the observatory capabilities were tested in full using snippets of the approved Key Programmes.

The SPIRE instrument contains an imaging photometer (camera) and an imaging spectrometer. The camera operates in three wavelength bands centered on 250, 350 and 500 microns, and so can make images of the sky simultaneously in three submillimeter “colors”. SPIRE was designed and built by an international collaboration, led by Professor Matt Griffin of Cardiff University.

HerMES is the Herschel Multi-tiered Extragalactic Survey, an astronomical project to study the evolution of galaxies in the distant Universe. It is the largest project on ESA’s Herschel Space Observatory. The project is carried out by a large team, made up primarily of people who built one of the instruments on Herschel called SPIRE. Hermes is also the Olympian messenger god, ruler of travelers, boundaries, weights and measures. HerMES maps large regions of the sky using cameras that are sensitive to infrared radiation. We expect to discover over 100 thousand galaxies. The light from most of these galaxies will have taken more than 10 billion years to reach us, which means we will see them as they were 3 to 4 billion years after the Big Bang. Since the cameras are detecting infrared radiation they see star formation that is hidden from conventional telescopes. We expect that our cameras will catch many of the galaxies at the moment they are forming most of their stars.

The Royal Astronomical Society (RAS, http://www.ras.org.uk/), founded in 1820, encourages and promotes the study of astronomy, solar-system science, geophysics and closely related branches of science. The RAS organizes scientific meetings, publishes international research and review journals, recognizes outstanding achievements by the award of medals and prizes, maintains an extensive library, supports education through grants and outreach activities and represents UK astronomy nationally and internationally. Its more than 3500 members (Fellows), a third based overseas, include scientific researchers in universities, observatories and laboratories as well as historians of astronomy and others.