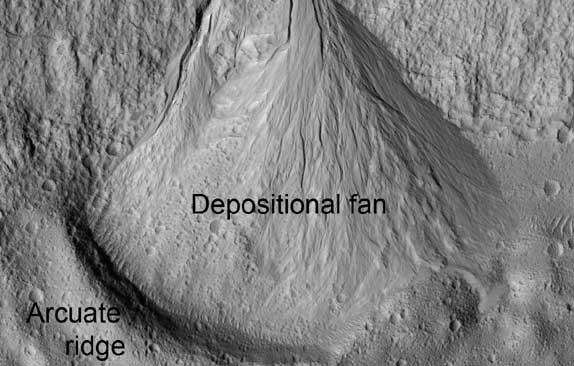 Planetary geologists at Brown University have found a gully fan system on Mars that formed about 1.25 million years ago. The fan offers compelling evidence that it was formed by melt water that originated in nearby snow and ice deposits and may stand as the most recent period when water flowed on the planet.

Planetary geologists at Brown University have found a gully fan system on Mars that formed about 1.25 million years ago. The fan offers compelling evidence that it was formed by melt water that originated in nearby snow and ice deposits and may stand as the most recent period when water flowed on the planet.

Gullies are known to be young surface features on Mars. But scientists studying the planet have struggled with locating gullies they can conclusively date. In a paper that appears on the cover of the March issue of Geology, the Brown geologists were able to date the gully system and hypothesize what water was doing there.

The gully system shows four intervals where water-borne sediments were carried down the steep slopes of nearby alcoves and deposited in alluvial fans, said Samuel Schon, a Brown graduate student and the paper’s lead author.

“You never end up with a pond that you can put goldfish in,” Schon said, “but you have transient melt water. You had ice that typically sublimates. But in these instances it melted, transported, and deposited sediment in the fan. It didn’t last long, but it happened.”

The finding comes on the heels of discoveries of water-bearing minerals such as opals and carbonates, the latter of which was announced by Brown graduate student Bethany Ehlmann in a paper in Science in December. Those discoveries build on evidence that Mars was occasionally wet far longer than many had believed, and that the planet may have hosted a warm, wet environment in some places during its long history. 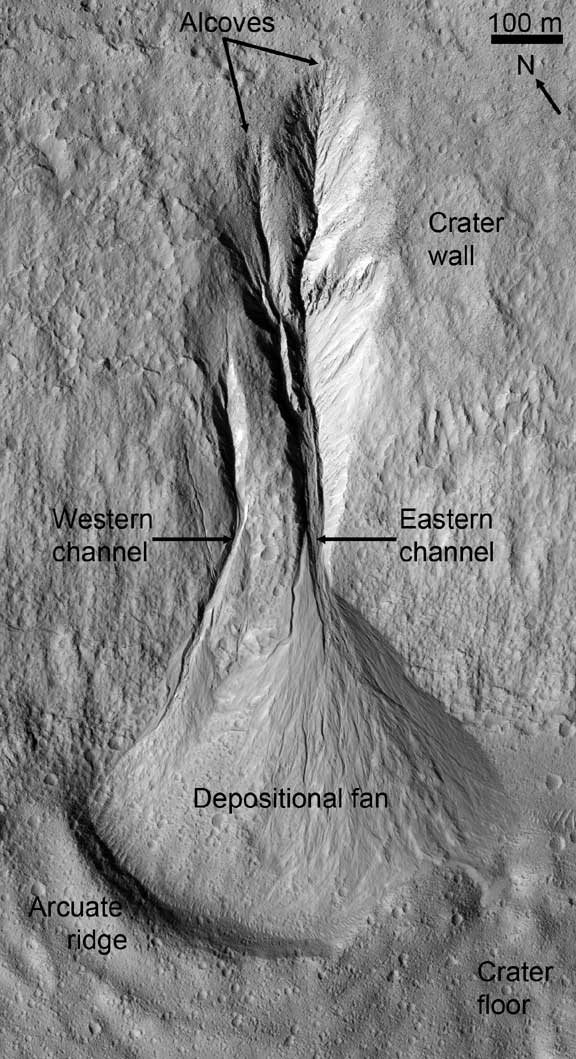 However, the finding of a gully system, even an isolated one, that supported running water as recently as 1.25 million years ago greatly extends the time that water may have been active on Mars. It also adds to evidence of a recent ice age on the planet when polar ice is believed to have been transported towards the equator and settled in mid-latitude deposits, said James Head III, professor of geological sciences at Brown, who first approximated the span of the martian ice age in a Nature paper in 2003.

“We think there was recent water on Mars,” said Head, who with Brown postdoctoral researcher Caleb Fassett is a contributing author on the paper. “This is a big step in the direction to proving that.”

The gully system is located on the inside of a crater in Promethei Terra, an area of cratered highlands in the southern mid-latitudes. The eastern and western channels of the gully each run less than a kilometer from their alcove sources to the fan deposit.

Viewed from afar, the fan appears as one entity several hundred meters wide. But by zooming in with the HiRISE camera aboard the Mars Reconnaissance Orbiter, Schon was able to distinguish four individual lobes in the fan, and determine that each lobe was deposited separately. Moreover, Schon was able to identify the oldest lobe, because it was pockmarked with small craters, while the other lobes were unblemished, meaning they had to be younger.

Next came the task of trying to date the secondary craters in the fan. Schon linked the craters on the oldest lobe to a rayed crater more than 80 kilometers to the southwest. Using well-established techniques, Schon dated the rayed crater at about 1.25 million years, and so established a maximum age for the younger, superimposed lobes of the fan.

The team determined that ice and snow deposits formed in the alcoves at a time when Mars had a high obliquity (its most recent ice age) and ice was accumulating in the mid-latitude regions. Sometime around a half-million years ago, the planet’s obliquity changed, and the ice in the mid-latitudes began to melt or, in most instances, changed directly to vapor. Mars has been in a low-obliquity cycle ever since, which explains why no exposed ice has been found beyond the poles.

The team tested other theories of what the water may have been doing in the gully system. The scientists ruled out groundwater bubbling to the surface, Schon said, because it seemed unlikely to have occurred multiple times in the planet’s recent history. They also don’t think the gullies were formed by dry mass wasting, a process by which a slope fails as in a rockslide. The best explanation, Schon said, was the melting of snow and ice deposits that created “modest” flows and formed the fan.