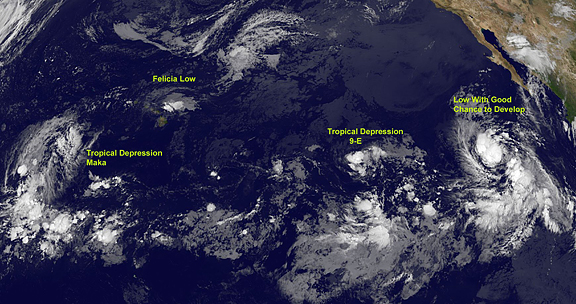 The GOES-11 satellite is getting a lot of business today, August 12. There are four areas of tropical interest between the Central and the Eastern Pacific Ocean today: two near Hawaii and two from a couple hundred to a thousand miles off the Mexican coast, and GOES-11 captured them all in one image.

GOES-11, or the Geostationary Operational Environmental Satellite is operated by the National Oceanic and Atmospheric Administration. NASA’s GOES Project at the Goddard Space Flight Center in Greenbelt, Md. creates some of the GOES images, and they made a stunning image that captures four current areas of interest in the Pacific.

Farthest west lies a new tropical depression in the Central Pacific called Maka. Maka has sustained winds near 35 mph, but is expected to strengthen into a tropical storm as it starts to turn toward the northwest near 12 mph. Maka formed late on Tues. August 11 and 5 a.m. EDT on Aug.ust 12, it was located far to the west-southwest of Honolulu, Hawaii, about 1,125 miles from there. That puts its center near 14.6 north and 173.5 west, also 305 miles west-southwest of Johnston Island.

Moving eastward, and located to Maka’s northeast is what is left of the once powerful Felicia. She’s now a remnant low pressure system, and is located just east of Maui and the Alenuihaha Channel within the main Hawaiian island chain. The low will move west very slowly over the next couple of days, and isn’t expected to redevelop.

The third tropical area is Tropical Depression 9E (TD9E), lingering in the Eastern Pacific Ocean. TD9E is poorly organized and isn’t expected to strengthen over the next day, but may become a tropical storm at sea over the weekend. At 11 a.m. EDT on August 12, TD9E’s center was located about 1,590 miles west-southwest of the southern tip of Baja California, near 14.6 north and 132.6 west. Its maximum sustained winds were near 30 mph, and it was moving 14 mph toward the west. Minimum central pressure is 1007 millibars.

Farthest east in the Pacific, and closest to mainland Mexico is a broad low pressure area that looks pretty significant on satellite imagery. It’s about 600 miles south-southwest of the southern tip of Baja California and moving west-northwest near about 12 mph. The storm is expected to strengthen into a tropical depression and get a name soon.

The GOES-11 satellite captured all four areas of tropical activity in one stunning image at 8 a.m. EDT on August 12. It’s a busy season in the eastern Pacific and GOES is watching. 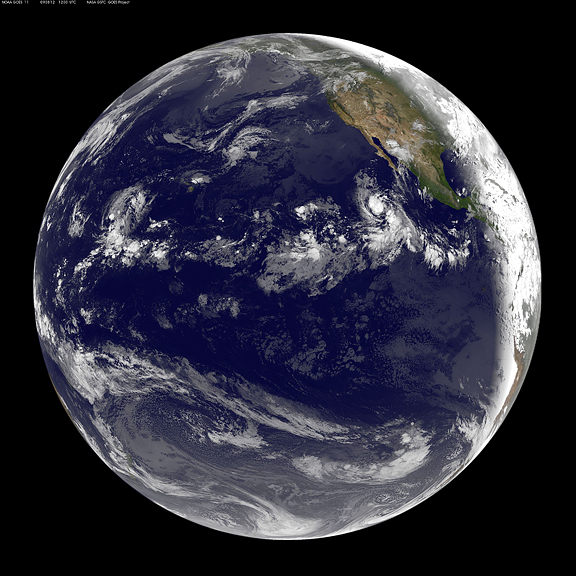 This is a “full-disk” image of the Earth taken from the GOES-11 satellite at 8 a.m. EDT on Aug. 12. Credit: NASA/GOES Project