Astronomers recently got their hands on Gemini Observatory’s revolutionary new adaptive optics system, called GeMS, “and the data are truly spectacular!” says Robert Blum, Deputy Director of the National Optical Astronomy Observatory with funding by the U.S. National Science Foundation.
“What we have seen so far signals an incredible capability that leaps ahead of anything in space or on the ground – and it will for some time.” Blum is currently using GeMS to study the environments in and around star clusters, and his preliminary data, targeting the spectacular cluster identified as RMC 136, are among a set of seven images released today. The remaining six images — spanning views of violent star-forming regions, to the graceful interaction of distant colliding galaxies — only hint at the diversity of cutting-edge research that GeMS enables.

After more than a decade in development, the system, now in regular use at the Gemini South telescope in Chile, is streaming ultrasharp data to scientists around the world – providing a new level of detail in their studies of the universe. The images made public today show the scientific discovery power of GeMS (derived from the Gemini Multi-conjugate adaptive optics System), which uses a potent combination of multiple lasers and deformable mirrors to remove atmospheric distortions (blurriness) from ground-based images. 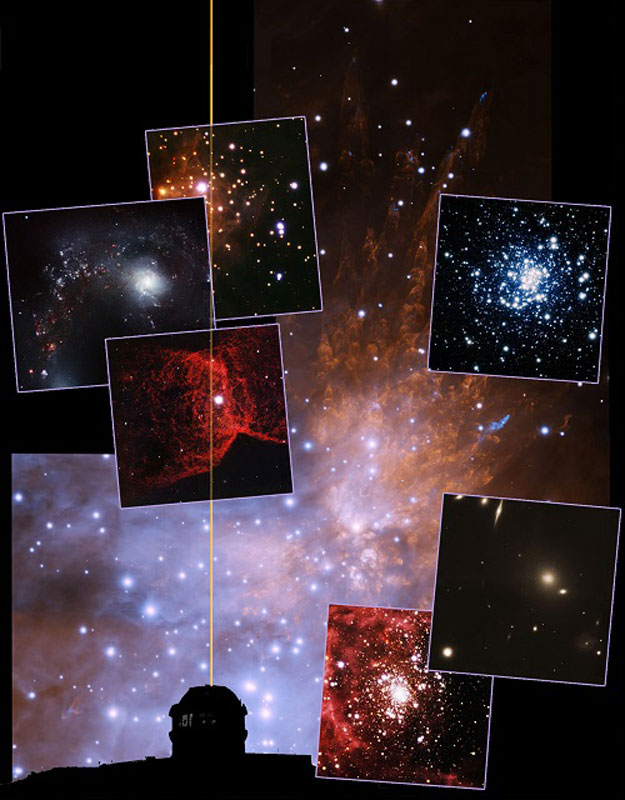 Unlike previous AO systems, GeMS uses a technique called “multi-conjugate adaptive optics,” which not only captures more of the sky in a single shot (between 10- to 20-times more area of sky imaged in each “picture”) but also forms razor-sharp images uniformly across the entire field, from top-to-bottom and edge-to-edge. This makes Gemini’s 8-meter mirror 10- to 20-times more efficient, giving astronomers the option to either expose deeper, or explore the universe more effectively with a wider range of filters, which will allow them to pick out subtle yet important structural details never seen before.

“Each image tells a story about the scientific potential of GeMS,” says Benoit Neichel who led the GeMS commissioning effort in Chile. According to Neichel, the targets were selected to demonstrate the instrument’s diverse “discovery space” while producing striking images that would make astronomers say, “I need that!”

The first data coming from GeMS are already making waves among astronomers across the international Gemini partnership. Tim Davidge, an astronomer at Canada’s Dominion Astrophysical Observatory, with funding by the Canadian National Research Council, studies populations of stars within galaxies beyond our Milky Way. His work requires extreme resolution to see individual stars millions of light-years away. “GeMS sets the new cool in adaptive optics,” says Davidge. “It opens up all sorts of exciting science possibilities for Gemini, while also demonstrating technology that is essential for the next generation of ground-based mega-telescopes. With GeMS we are entering a radically new, and awesome, era for ground-based optical astronomy.” 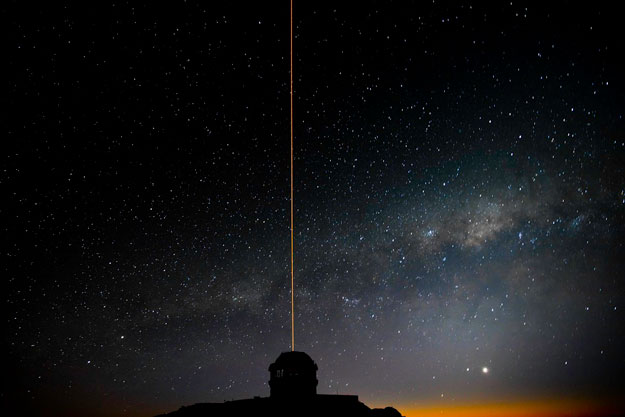 Stuart Ryder of the Australian Astronomical Observatory, with funding through the Australian Research Council, whose work requires crisp images of distant galaxies to reveal exploding stars (supernovae), also anticipates the potential of GeMS for his research. But mostly he says he’s blown away by the raw technology involved. “I was fortunate enough to witness GeMS/GSAOI in action, and I was awestruck by the sight of the yellow-orange laser beam piercing the clear, moonlit night,” says Ryder. “When one considers all the factors that have to work together, from clear skies, to a steady stream of meteors burning up in the upper atmosphere sprinkling enough sodium atoms to be excited by the laser — it’s wonderful to see it all come together.”

The GeMS system uses a constellation of five laser guide stars and multiple deformable mirrors to remove atmospheric distortions to starlight in an innovative and revolutionary way. The laser, a solid-state sodium (yellow/orange) laser, was developed with significant supplemental funding through the U.S. National Science Foundation and from the entire Gemini partnership. See http://www.gemini.edu/node/12028 for the GeMS “first light” image release and a more detailed description of the technology used by GeMS.

The new images are available as high-resolution downloads with captions at: http://www.gemini.edu/node/12020