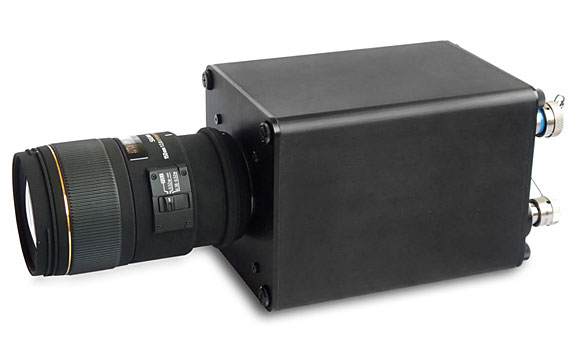 A multispectral imager built by FluxData, Inc., a leading manufacturer of multispectral systems, was launched into space aboard the Japanese HTV-2 mission, heading to the International Space Station (ISS), on January 22, 2011.

A multispectral imager built by FluxData, Inc., a leading manufacturer of multispectral systems, was launched into space aboard the Japanese HTV-2 mission, heading to the International Space Station (ISS), on January 22, 2011. In the upcoming months after arrival, the FluxData imager, a key component of the International Space Station Agricultural Camera (ISSAC) will be installed in the Window Observation Research Facility (WORF) by the crew onboard the ISS. ISSAC was developed by students and faculty of the University of North Dakota (UND) in Grand Forks, ND., in support of their Upper Midwest Aerospace Consortium (UMAC) research efforts. ISSAC will take frequent multispectral images of vegetated areas on the Earth, specifically focusing on the northern Great Plains and Rocky Mountain regions of the United States.

Through UND’s campus-based operations center, ISSAC will provide end-users the ability to select specific geographical areas of interest and request the collection of imagery that will be downlinked, processed, and delivered within just 1 to 2 days. The data and information ISSAC provides will be used for a wide range of activities including: nitrogen application maps to improve fertilizer use, agriculture management zone decision support systems to improve nutrient and invasive species management, and rangeland management tools to improve livestock allocation and evaluation. The rapid responsiveness of ISSAC imagery may also aid in disaster management, flood monitoring and wildland fire mapping.

The imaging sensor assembly of ISSAC is based on FluxData’s FD-1665 3CCD Multispectral camera technology. The system’s Green, Red and Near-infrared spectral response bands were selected to emulate those of the Landsat 7 satellite and provide many of the same benefits for vegetation and moisture discrimination, monitoring and identification.

Lawrence Taplin, CTO of FluxData, states, “Substantial improvements were made to the system’s optical and mechanical design to withstand the environmental rigors of a payload launch and environmental conditions in the space station. This involved designing the overall ISSAC system to meet the tough NASA requirements for in-station safety, electromagnetic interference, shock and vibration. The results of these improvements are being incorporated across FluxData’s product lines for the benefit of other markets and applications.” In addition Doug Olsen, Project Manager for ISSAC at UND, states, “The FluxData design incorporates subcomponents that can be changed by the crew which greatly increases the overall robustness and reliability of the system. We look forward to getting the first images from space.”

Pano Spiliotis, CEO of FluxData, said, “We are very pleased to be part of the ISSAC program. We have delivered a very high performance, complex and sophisticated multispectral camera system that will bring the unique benefits of space-based imaging to the general public. It is a great honor to have been selected to contribute to this program and a testament to the broad capabilities of FluxData’s products and services.”