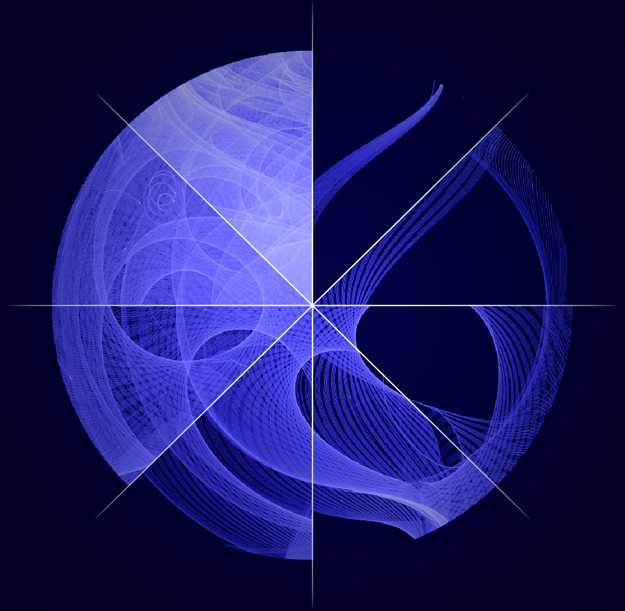 NASA’s Fermi Gamma-ray Space Telescope orbits our planet every 95 minutes, building up increasingly deeper views of the universe with every circuit. Its wide-eyed Large Area Telescope (LAT) sweeps across the entire sky every three hours, capturing the highest-energy form of light — gamma rays — from sources across the universe. These range from supermassive black holes billions of light-years away to intriguing objects in our own galaxy, such as X-ray binaries, supernova remnants and pulsars.

Now a Fermi scientist has transformed LAT data of a famous pulsar into a mesmerizing movie that visually encapsulates the spacecraft’s complex motion.

The Vela pulsar outlines a fascinating pattern in this movie showing 51 months of position and exposure data from Fermi’s Large Area Telescope (LAT). The pattern reflects numerous motions of the spacecraft, including its orbit around Earth, the precession of its orbital plane, the manner in which the LAT nods north and south on alternate orbits, and more. The movie renders Vela’s position in a fisheye perspective, where the middle of the pattern corresponds to the central and most sensitive portion of the LAT’s field of view. The edge of the pattern is 90 degrees away from the center and well beyond what scientists regard as the effective limit of the LAT’s vision. Better knowledge of how the LAT’s sensitivity changes across its field of view helps Fermi scientists better understand both the instrument and the data it returns. Credit: NASA/DOE/Fermi LAT Collaboration

Pulsars are neutron stars, the crushed cores of massive suns that destroyed themselves when they ran out of fuel, collapsed and exploded. The blast simultaneously shattered the star and compressed its core into a body as small as a city yet more massive than the sun. The result is an object of incredible density, where a spoonful of matter weighs as much as a mountain on Earth. Equally incredible is a pulsar’s rapid spin, with typical rotation periods ranging from once every few seconds up to hundreds of times a second. Fermi sees gamma rays from more than a hundred pulsars scattered across the sky.

One pulsar shines especially bright for Fermi. Called Vela, it spins 11 times a second and is the brightest persistent source of gamma rays the LAT sees. Although gamma-ray bursts and flares from distant black holes occasionally outshine the pulsar, they don’t have Vela’s staying power. Because pulsars emit beams of energy, scientists often compare them to lighthouses, a connection that in a broader sense works especially well for Vela, which is both a brilliant beacon and a familiar landmark in the gamma-ray sky.

Most telescopes focus on a very small region of the sky, but the LAT is a wide-field instrument that can detect gamma rays across a large portion of the sky at once. The LAT is, however, much more sensitive to gamma rays near the center of its field of view than at the edges. Scientists can use observations of a bright source like Vela to track how this sensitivity varies across the instrument’s field of view.

With this in mind, LAT team member Eric Charles, a physicist at the Kavli Institute for Particle Astrophysics and Cosmology and the SLAC National Accelerator Laboratory at Stanford University in California, used the famous pulsar to produce a novel movie. He tracked both Vela’s position relative to the center of the LAT’s field of view and the instrument’s exposure of the pulsar during the first 51 months of Fermi’s mission, from Aug. 4, 2008, to Nov. 15, 2012.

The movie renders Vela’s position in a fisheye perspective, where the middle of the pattern corresponds to the central and most sensitive portion of the LAT’s field of view. The edge of the pattern is 90 degrees away from the center and well beyond what scientists regard as the effective limit of the LAT’s vision.

The pulsar traces out a loopy, hypnotic pattern reminiscent of art produced by the colored pens and spinning gears of a Spirograph, a children’s toy that produces geometric patterns.

The pattern created in the Vela movie reflects numerous motions of the spacecraft. The first is Fermi’s 95-minute orbit around Earth, but there’s another, subtler motion related to it. The orbit itself also rotates, a phenomenon called precession. Similar to the wobble of an unsteady top, Fermi’s orbital plane makes a slow circuit around Earth every 54 days.

In order to capture the entire sky every two orbits, scientists deliberately nod the LAT in a repeating pattern from one orbit to the next. It first looks north on one orbit, south on the next, and then north again. Every few weeks, the LAT deviates from this pattern to concentrate on particularly interesting targets, such as eruptions on the sun, brief but brilliant gamma-ray bursts associated with the birth of stellar-mass black holes, and outbursts from supermassive black holes in distant galaxies.

The Vela movie captures one other Fermi motion. The spacecraft rolls to keep the sun from shining on and warming up the LAT’s radiators, which regulate its temperature by bleeding excess heat into space.

The braided loops and convoluted curves drawn by Vela hint at the complexity of removing these effects from the torrent of data Fermi returns, but that’s a challenge LAT scientists long ago proved they could meet. Still going strong after more than four years on the job, Fermi continues its mission to map the high-energy sky, which is now something everyone can envision as a celestial Spriograph traced by a pulsar pen.