As NASA returns humans to the Moon and then heads out to Mars, a new type of astronaut will be required to explore these worlds. Let’s called them “expeditionary astronauts”.
Just as expeditions fanned out across our planet to explore its wonders, expeditions to other worlds are now on the horizon. Project Apollo gave us a taste of what this could be like. Project Artemis will take it to a whole new level.

And how we do these things is going to be different. Unlike Apollo NASA plans to go back to the Moon utilizing partnerships with other space agencies and private companies. Some companies may even go there on their own. The people who go on these missions are going to need skillsets much more diverse and synergistic than their Apollo predecessors. One astronaut has already started.

Ten years ago on 19 May 2009 astronaut, mountaineer, and explorer Scott Parazynski became the first human to have flown in space and stand atop the highest point on the surface of our planet. While his five space flights required immensely powerful machines, Scott had only his muscles to carry him up to stand in the jet stream atop Mt. Everest. I had the pleasure of accompanying Scott to Everest Base Camp and stayed there for a month doing education and public outreach for his climb (see “My Star Trek Episode at Everest” for my personal experiences). 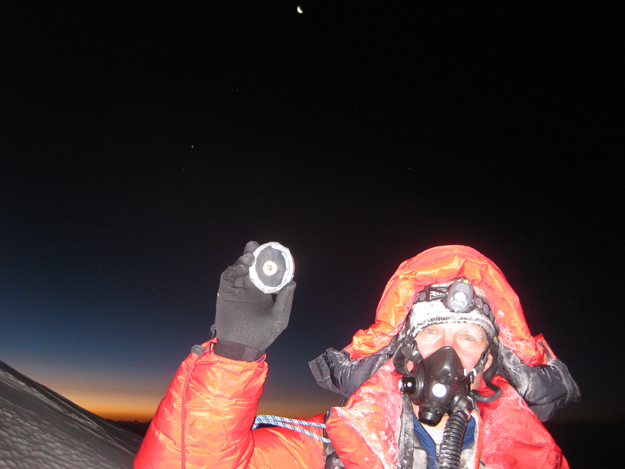 Astronaut Scott Parazynski standing on the summit of Mt. Everest on 19 May 2009. In his hand is a container with 4 small Apollo 11 Moon rocks. Overhead the Moon shines down on Everest. These Moon rocks plus a piece of the summit of Everest are now aboard the International Space Station on permanent exhibit in the ISS cupola. Credit SpaceRef Interactive/Scott Parazynski

While flying in space and climbing Everest are rather extraordinary and share many similarities they also have distinct differences. Both involve a lot of personal risk. Both require extensive training and prior experience; the ability to respond to a myriad of potential hazards (likely and unlikely; known and unknown), more than a little courage and determination; and a fair amount of teamwork wherein many assist – but few reach the summit – or space.

Unless you are a pilot, riding into space usually requires little effort on your part – with the bulk of the responsibilities handled by others (or computers). On a climb like Everest, while many people support you, in the end you and you alone are in direct control of your fate. The ride into space requires little physical exertion other than enduring the G’s you pull during launch. But climbing Everest requires months of acclimatization followed by a grueling traverse of a region appropriately called the “death zone” since humans cannot live there very long regardless of the mechanical aids they bring with them.

There is another difference – one that is starting to become muddied as more people travel into space. Until recently the people who travelled into space have been government employees involved in some sort of research activity connected to scientific or national goals. People who climb mountains like Everest do so for personal reasons (everyone’s reasons are different). But now, with the advent of commercial space travel, many people will soon be traveling into space for totally personal reasons. And some will be traveling into space to do privately-funded commerce and science. As such, for many, the parallels between extreme mountaineering and space travel will likely become increasingly similar in terms of motivation and risk acceptance.

If you want a preview of what lies ahead in a personalized, commercially-enabled era of space exploration, James Cameron’s personally-funded expedition to the deepest point in Earth’s ocean, Richard Garriott’s trip to the ISS, and the Breakthrough Listen SETI efforts offer examples of what lies ahead. All ascents of Everest are privately funded. Yet many involve educational and scientific activities. As part of our trip Scott and I did live webcasts for the Challenger Center and we had an Astrobiology experiment provided by Lynn Rothschild at NASA Ames that we conduced on Everest.

There is an impending confluence between mountaineering, exploration, and spaceflight. During the history of human spaceflight, mountaineering and overt exploration skills have not been needed with the brief exception of the Apollo program and contingency training in case of an emergency landing on Earth. NASA will soon return humans to the Moon and then send them on to Mars. When these crews arrive they will need to be skilled at traversing a wide variety of terrains and perform tasks well beyond quick help from Earth. Self-sufficiency and a broad skillset will be essential.

Expeditions on a planetary surface will not be like stays on a Space Shuttle or the International Space Station. They will be more like endless winter camping in a desolate wilderness where something is always threatening to go wrong – and help from home is impossible. As such, one of the best reasons to go to the Moon before moving on to Mars is not technical. Rather, it is experiential.

If you compare the standard shelter arrangements at Everest (small tent, sometimes crowded and filled with gear, dirt, and various smells, hazardous external environment) with descriptions of famous antarctic expeditions – or the inside of Apollo lunar landers – it should be obvious that mountaineering or polar expeditions on Earth are better training grounds for expeditionary astronauts than the International Space Station.

Simulators serve a critical purpose. But it is one thing to simulate a mission inside a building when your car is parked outside to take you home at the end of the day. It is quite another to actually be in an extreme situation as you practice the skills needed for off-world exploration — situations or analogs for extraterrestrial environments that force you to think in an expeditionary sense – one where you and your small group of colleagues learn how to actually live and work on a remote planetary surface. I have participated on expeditions to several such environments: Devon Island 800 miles from the North Pole and Everest Base Camp at 17,600 feet for month-long stays. Nothing beats “being there” to teach you how things will actually go when your life or someone else’s may depend on your actions at any moment. No matter how well-prepared you think you are these analogs will teach you things you never expected – things you really need to know.

On Earth Antarctica is probably the best overall analog for training expeditionary astronauts. The Moon should then become the next logical place to go to actually try things out on an alien world before commencing a human expansion to Mars and beyond.

When astronauts land at the Moon’s south pole who is going to build the solar collectors on the rim of Shackleton crater? It’s not flat. Climbing will be required. On Mars a potential region of fossil-bearing rock may be located on a cliff face or in a cave. There are only so many things a robot can do. Human-operated rovers can get stranded and crews my have to hike or climb to get back to base. Exploring new worlds in person is going to require a whole new way of thinking for NASA. It is also going to require new ways of identifying, mitigating, and accepting risk.

In 1989 NASA commissioned a series of paintings to illustrate possible Mars exploration plans. One of the most popular and widely copied was painted by Pat Rawlings and depicts an astronaut rappelling off of a Martian cliff. Some of the original Apollo mission plans included similar feats inside of the crater Tycho. The cancelled Apollo 20 mission was going to land inside of the crater Copernicus with its immense central peaks. It’s not as if NASA has never thought of extraterrestrial climbing before. 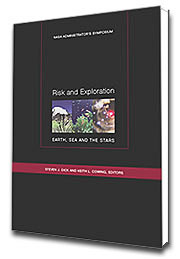 Back in 2004 I raised the issue of risk and exploration to NASA Administrator Sean O’Keefe. After the loss of Columbia I had observed that the public’s reaction to the risks associated with spaceflight seemed to be different than perceptions they had of the risks associated with other forms of exploration and some sporting activities. To explore this issue we convened a symposium titled “Risk and Exploration: Earth, Sea and the Stars”. My co-chair for the event was astronaut John Grunsfeld, (also a mountaineer who has climbed Denali) who just happened to be orbiting overhead while Scott Parazynski stood on Everest. The education and public outreach that I did for Scott’s climb arose directly from that event. The proceedings from the event will show that we had quite an illustrious crowd – and the lessons offered are equally valid today. In some cases, even more so.

Up until now, many of the skills needed to become astronauts have been limited to specialized government training facilities operated at great cost. As we begin to train expeditionary astronauts for the Moon and Mars, many of the basic skills they’ll need in addition to being an astronaut are those already widely available to the general public. NASA will need mountaineers, biologists, construction workers, horticulturists and many other professions. The more diverse the needs for NASA’s expeditionary astronaut corps, the broader the number of people who can identify with what NASA is doing. The more people who can personally identify with space exploration and see a chance to be involved, the more support there will be to do more of it.

When Scott reached the summit he left some special prayer flags there with images of the crews of Apollo 1, Challenger, Columbia, Soyuz 1 and 11. He also left a patch from STS 51-F for Astronaut Karl Gordon Henize who died in 1993 during an attempt to climb Everest. Since Scott’s ascent another astronaut, Maurizio Cheli reached the summit in 2018.