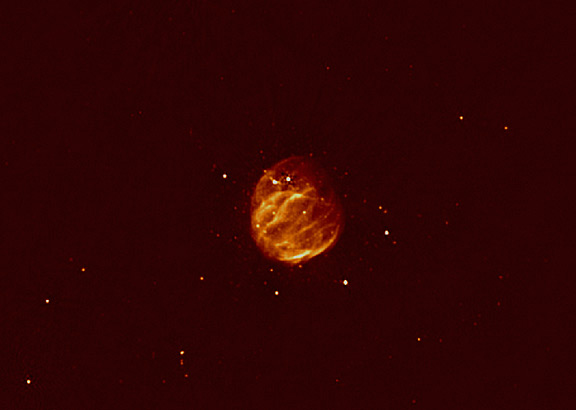 A new and uniquely powerful tool for cutting-edge science is emerging on the crisp, high desert of western New Mexico. Outwardly, it looks much the same as the famed Very Large Array (VLA), a radio telescope that has spent more than three decades on the frontiers of astronomical research. The 27 white, 230-ton dish antennas still peer skyward, the 72 miles of railroad track still wait to transport the antennas across the arid plains, the familiar buildings remain, and crews still fan out across the desert to service the antennas.

A new and uniquely powerful tool for cutting-edge science is emerging on the crisp, high desert of western New Mexico. Outwardly, it looks much the same as the famed Very Large Array (VLA), a radio telescope that has spent more than three decades on the frontiers of astronomical research. The 27 white, 230-ton dish antennas still peer skyward, the 72 miles of railroad track still wait to transport the antennas across the arid plains, the familiar buildings remain, and crews still fan out across the desert to service the antennas.

Functionally, however, everything has changed. The VLA has become the Expanded VLA (EVLA).

“We have a completely new scientific instrument, with completely new capabilities, and it’s enabling research that was impossible until now,” said Chris Carilli, Chief Scientist of the National Radio Astronomy Observatory (NRAO). Carilli and Rick Perley, EVLA Project Scientist, outlined the capabilities and early accomplishments of the EVLA at the American Astronomical Society’s meeting in Boston, MA.

Carilli presented highlights of projects in which researchers from around the world made first use of some of the EVLA’s new capabilities while those capabilities still are being tested. The EVLA already is providing new and tantalizing insights on a wide range of objects from our nearby cosmic neighborhood to the far reaches of the distant Universe.

* Shedding new light on a critical aspect in the formation of Sun-like stars, EVLA observations, combined with earlier data from NRAO’s Green Bank Telescope, revealed previously-unseen detail of molecular gas near a very young star. Jaime Pineda, of ESO and the University of Manchester, and his colleagues studied emission of ammonia molecules and found complex structure in a region where the gas cloud’s random, turbulent motions have been “smoothed out” to allow the gas to collapse into stars. Their new image shows that gas in a region of “coherent” motion can fragment into filaments and its own gravity can cause it to collapse into a new star.

* The improved quality of EVLA images helped show how large ejections of matter from massive young stars can interact with their surroundings and play a key role in the evolution of galaxies. Grazia Umana, of the Astrophysical Observatory of Catania, in Italy, led a team studying such a star about 5,500 light-years away that is surrounded by at least two shells of ejected material. The EVLA image showed that the inner shell probably is overtaking the outer shell, creating shock waves.

* Another team, led by Mark Claussen of the NRAO, used radio waves emitted by cyanoacetylene (HC3N) molecules to map multiple shells of material ejected by an old giant star. Their images trace the mass-ejection history of this star over an 800-year period. This work was made possible by the new frequency coverage of the EVLA and also by its greatly improved capability to analyze the data received.

* A set of new analysis algorithms, combined with the EVLA’s sensitivity and high resolution, allowed researchers to separate the emission from supernova remnants from emission from other sources and make the most detailed images ever of one such object. Previous techniques sacrificed sensitivity or resolution, but Sanjay Bhatnagar, of the NRAO, and his colleagues showed that the EVLA will be able to survey the plane of our Milky Way Galaxy and distinguish the remnants of previously-unseen supernova explosions from other objects.

* The greater sensitivity of the EVLA has made it a valuable tool for studying relatively nearby dwarf galaxies that many astronomers think are the type that formed the building blocks for larger galaxies in the early Universe. Volker Heesen, of the University of Hertfordshire in the UK, and his colleagues studied a dwarf galaxy called IC 10, finding a magnetic “superbubble” in the galaxy.

* Looking into the distant, and thus early, Universe, Carilli led a team that studied the distribution of Carbon Monoxide gas in three galaxies some 12 billion light-years from Earth. The galaxies are in a proto-cluster of numerous galaxies, and their EVLA image shows the largest one has been disturbed, probably by gravitational interaction with its neighbors. Calling the region an ideal “laboratory” for studying the formation of massive galaxies in the early Universe, their observations show the galaxies are rapidly forming stars at a young age. This supports other evidence indicating that rapid bursts of star formation triggered by galaxy mergers in clusters were common early in the history of the Universe.

* Using new frequency coverage of the EVLA, Ran Wang, an NRAO Jansky Postdoctoral Fellow at the University of Arizona, looked at five even more-distant galaxies, 12.7 billion light-years away. With her colleagues, Wang also studied carbon monoxide gas in the galaxies, finding strong evidence in at least one case of a collision between two of the galaxies. Their observations show an early phase of the formation of the galaxies and the supermassive black holes at the cores of those galaxies.

These new discoveries, and others, will be published in an upcoming special issue of the Astrophysical Journal Letters.

“When the original VLA was dedicated in 1980, it made possible entirely new types of research. Now, as we bring the EVLA online, it, too, is revolutionizing our ability to study the Universe,” Perley said.

Construction on the EVLA project began in 2001, and completion is scheduled for next year. The project replaced the 1970s-vintage electronic equipment, analog data-transmission system, and the central, special-purpose computing “heart” of the system with state-of-the-art electronics, an all-digital, high-bandwidth data-transmission system, and a new, superfast central supercomputer with an innovative design that revolutionizes scientists’ ability to optimize their observations and exquisitely analyze their results.

The new system is more than ten times more sensitive to faint radio emissions from distant astronomical objects than the pre-EVLA system, and covers more than three times more radio frequencies. The EVLA receiving systems would be capable of detecting the weak radio signal from a cell phone at the distance of Jupiter, a half-billion miles away.

The original VLA was authorized by Congress in 1972, and astronomers began using it for research even before its completion. To date, more than 2,500 scientists from around the world have used the VLA for more than 13,000 observing projects. More than 200 PhD dissertations have been based on data obtained from VLA observations.

The EVLA project costs $97.99 million in U.S. dollars — $58.98 million in new direct funding from the National Science Foundation, $1.75 million from Mexico, $17.1 million from Canada in the form of the new central supercomputer, called a correlator, and $20.16 million in the form of labor from existing staff at the NRAO. The current value of the VLA infrastructure on which the EVLA was built is estimated at more than $300 million.

“These early results are only the beginning of a very rich scientific harvest that the EVLA will produce. This new research facility will have a major impact on the most important questions facing astronomers in the 21st century,” said NRAO Director Fred K.Y. Lo.