ESA’s experimental reentry vehicle passed its milestone descent and landing test on Wednesday at the Poligono Interforze Salto di Quirra off the east coast of Sardinia in Italy.
The full-scale Intermediate eXperimental Vehicle (IXV) prototype was released from an altitude of 3000 m by a helicopter, falling to gain speed to mimic a space mission before parachute deployment. The parachute slowed IXV for a safe splashdown in the sea at a speed below 7 m/s.

This last step in a series of tests shows that IXV can be recovered safely after its mission into space.

The IXV project is developing and flight-testing the technologies and systems for Europe’s future autonomous atmospheric reentry vehicles. 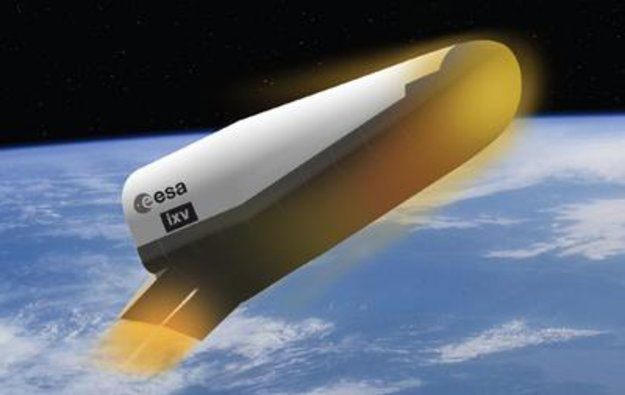 It will be launched by ESA next year on Vega, Europe’s new small launcher, into a suborbital path. It will reenter the atmosphere as if from a low-orbit mission, testing new European reentry technologies during its hypersonic and supersonic flight phases.

At the Yuma Proving Ground in Arizona, USA, the multistage supersonic parachute was qualified up to the opening of the main subsonic stage.

Building on these, Wednesday’s test started with the redeployment of the main subsonic parachute followed by: cutting the two ablative thermal protection covers of the parachute bridles, firing the 16 non-explosive actuators to release the four panels covering the floatation balloons, jettisoning the panels, detecting the water impact, deploying the beacons, and receiving the signal from the Cospas-Sarsat satellite network pinpointing the prototype bobbing in the sea.

An anomaly in inflating the balloons will be investigated. The vehicle was recovered from the sea and taken to land for detailed inspections and analysis.