The SETI Institute and Astrobotic Technology, Inc. are announcing the successful mapping in 3D of the interior of an ice-rich lava tube in Iceland using a LiDAR-equipped drone.
The team was investigating the Lofthellir Lava Tube Ice Cave in the remote Myvatn region of Iceland, and used the drone to document the lava tube’s shape and extent, history of rock falls, and spectacular ice formations.

The field team that studied the Lofthellir lava tube ice cave is led by SETI Institute planetary scientist Pascal Lee. “We went to Iceland to study a lava tube with massive amounts of ice inside it to understand better both the potential hazards and opportunities presented by the many lava caves we hope to explore on the Moon and Mars,” says Lee. “One promising way to explore them is with drones.”

Both the Moon and Mars are known to have cave openings at their surface. These sites give access to intriguing underground environments sheltered from the harsh conditions prevailing at the surface, including wide day/night temperature swings and incessant radiation and micrometeorite bombardment from space. Caves on other worlds have been proposed as natural shelters that future human explorers could use for storage, short-term occupation, and possibly long-term habitation. 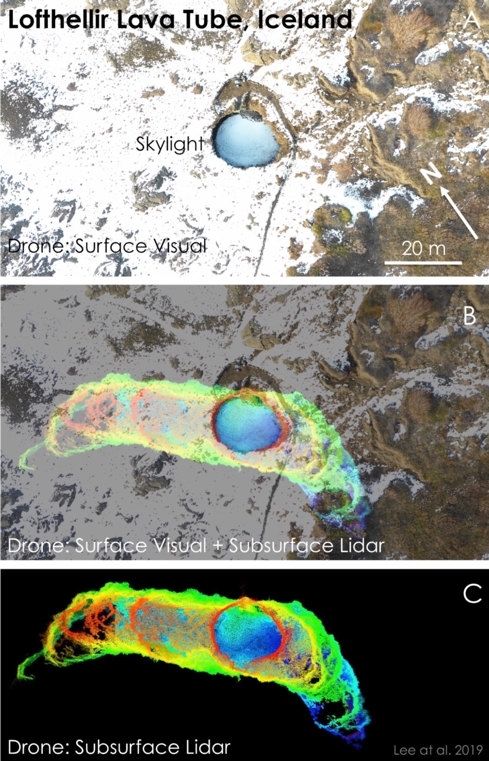 In addition to providing shelter, some caves, in particular those reported near the North pole of the Moon and on the flanks of giant volcanoes on Mars, might be cold enough to accumulate water ice via a process called cold-trapping. Such sheltered ice would represent an important record of the history of water on the Moon and Mars, and in the case of the latter, an exciting opportunity to search for signs of life as well. Ice in caves, if accessible, might also represent a significant resource for future human explorers. Water is critical for hydration, but can also be broken down into hydrogen and oxygen to produce rocket fuel.

Many if not most cave openings on the Moon and on Mars are found in either volcanic terrain or terrain that was once melted as a result of intense heating from the impact of large asteroids or comets. Lava tubes form when the surface of a lava flow cools and solidifies, while molten rock underneath continues to flow and eventually drains away: a tube-shaped underground cavern is then created.

“Small free-flying spacecraft might be the ideal robotic platform for the exploration of lava tubes on Earth, the Moon, and Mars for the simple reason that they would not need to come in direct contact with any of the rough and potentially unstable surfaces found inside caves and lava tubes,” says Andrew Horchler, Director of Future Missions and Technology at Astrobotic, the private space company developing the drone-based LiDAR mapping technology. “Nimble drones could enter, map, and exit caves quickly, returning from the darkness to send data back to Earth, return a sample to the surface, recharge and refuel.”

While a cave-exploring drone on Earth may use propellers, free-flying spacecraft exploring caves on the Moon, where there is practically no atmosphere, or in the thin air of high altitude lava tubes on Mars’ giant volcanoes, would have to use small thrusters. The mission of the terrestrial drone deployed at the Lofthellir Ice Cave focused on validating the idea of using a drone-equipped LiDAR to safely navigate and accurately map rock and ice inside a dark lava tube in the absence of GPS or any prior map.

Under a research contract with NASA, Astrobotic has developed a custom navigation software product, known as AstroNav, to give drones and small free-flying spacecraft the ability to autonomously explore and map subterranean environments. AstroNav employs both stereo vision and LiDAR, works without GPS or previously stored maps, and can operate in real-time while a novel environment is explored at a high rate of speed. 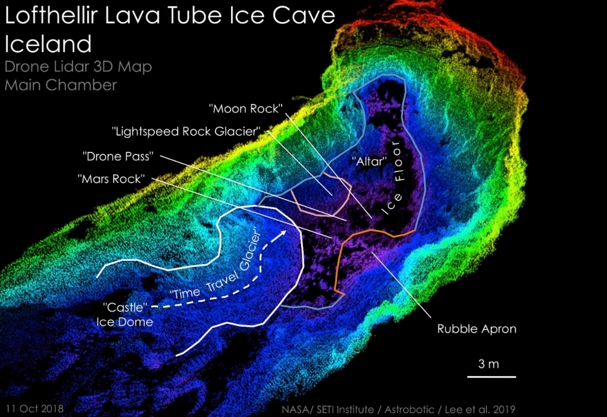 The ability to utilize and fuse multiple sensors is critical to exploring these challenging environments. While 3D scanning LiDAR can be used to explore and map out pitch-black subterranean environments, and visual sensing can be used on the brightly lit surface, combining the sensing modalities allows a drone or spacecraft to transition between the two sensing modalities mid-flight as it traverses over the surface before entering a cave.

“The Astrobotic drone and LiDAR performed exactly as we had hoped, and was able to help us map the Lofthellir Lava Tube in 3D within minutes” says Lee. “We now have a highly accurate model of the shape and dimensions of the cave, and of the configuration of its many rocky and icy features, such as rock falls, ice columns, and micro-glaciers.”

The mapping of an icy cave and lava tube on Earth using a drone-equipped LiDAR is a first. “More development work will be needed to create a system that’s ready for the Moon or Mars, but the study of this icy lava tube is an important first step for us” says Horchler.

Caves on the Moon and Mars are expected to be targets for future robotic and human missions. In this context, the Lofthellir Lava Tube Ice Cave might have an important role to play as it is located in the same area where, 50 years ago, Apollo astronauts received a significant part of their field geology training in preparation for their voyage to the Moon. “Lofthellir lava tube was not known at the time, but as we prepare to return to the Moon and journey to Mars, a new generation of astronauts could return to this area for training,” says Lee. “I would recommend adding Lofthellir to the curriculum.”

The team is presenting the results of their study at the upcoming 50th Lunar and Planetary Science Conference convening on 18-22 March, 2019, in Houston, TX, in a paper titled Lofthellir Lava Tube Ice Cave, Iceland: Subsurface micro-glaciers, rockfalls, drone LiDAR 3D-mapping, and implications for the exploration of ice-rich lava tubes on the Moon and Mars.

This research was supported by NASA and the Mars Institute, with additional support from a Mohammed bin Rashid Space Settlement Challenge grant from the Dubai Future Foundation awarded through the Guaana open research funding platform.