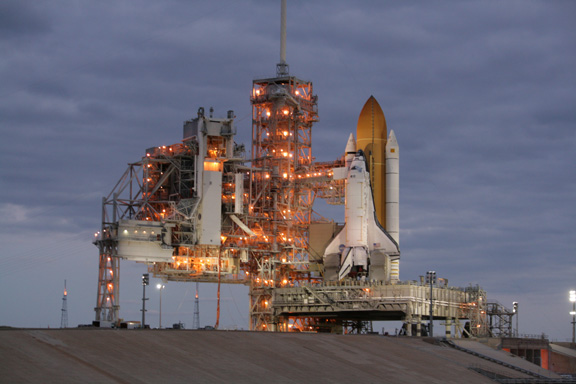 Discovery at Dawn after arrival of payload canister which was mounted on Rotating Service Structure at left in the early morning hours of 7 Oct. 2010. Credit: Ken Kremer

Discovery at Dawn after arrival of payload canister which was mounted on Rotating Service Structure at left in the early morning hours of 7 Oct. 2010. Credit: Ken Kremer

Ken Kremer, 7 Oct 2010 Kennedy Space Center: The cargo for Discovery’s last mission to space arrived at the shuttle launch pad just after 2 AM this morning, Thursday, 7 October 2010. Prelaunch preparations for the final flight of Space Shuttle Discovery – STS-133 – are rapidly ramping up to their final phase in anticipation of the launch slated for 1 November 2010 at 4:40 PM EDT from the Kennedy Space Center (KSC) , Florida.

Discovery’s primary cargo is a new module for the International Space Station which will provide much needed storage space for the resident crew of the orbiting outpost. The module -or PMM – will be the last permanent addition to be contributed by the United States to the ISS. The secondary cargo element is the Express Logistics Carrier-4 which will house exterior space parts.

The Permanent Multipurpose Module (PMM) – also named Leonardo – was transported inside a large shipping canister from the Space Station Processing Facility (SSPF) to the top of Launch Pad 39 A. The canister was then hoisted up to a holding position on the massive Rotating Service Structure (RSS) from which the cargo will soon be loaded into the shuttle payload bay.

Photographers and journalists including myself were invited by NASA to document the historic event from on top of shuttle launch pad 39 A as the sun was rising at the seaside launch complex. The view was thrilling and the atmosphere unsettled, in accordance with the bittersweet feeling of nearly everyone here as the shuttle program is shutdown prematurely at the height of its safety and capability. An uncertain future lies ahead for KSC and NASA.

The cocoon like RSS which protects the shuttle orbiter while it is parked at the launch pad had been moved away from Discovery so that the payload canister could be lifted up and attached to the clean room area, or Payload Changeout Room (PCR). The cargo will by pushed into the PCR and then installed into the 60-foot-long payload bay later this week.

For the trip to orbit, Leonardo is packed with living supplies, science experiments and spare parts as well as the unique Robonaut dubbed “R2”, the first humanoid robot to go into space. The module was built in Italy but is owned by the US under a formal barter arrangement with the Italian Space Agency. Leonardo is named in honor of the Italian renaissance painter and inventor, Leonardo Da Vinci.

Leonardo was originally designed as a sort of space moving van for short sorties to space to deliver many thousands of pounds of important supplies and gear to the station. The module has previously traveled back and forth seven times to the ISS, while nestled inside the shuttles cavernous payload bay.

During all previous flights, Leonardo was temporarily berthed at the ISS during shuttle missions to unload supplies brought aloft and then packed to the gills with important science samples and unwanted trash for the return to Earth.

With the shuttle retirement looming, NASA officials decided that Leonardo could serve one final purpose by serving as an unplanned “bonus” room in orbit which would be especially helpful to provide an additional habitable room as the ISS crew size was doubled from three to six residents.

Since Leonardo was not designed for a permanent stay in space, additional protective shielding had to be installed to guard against the ever present threat of potentially dangerous micrometeoroid impacts, according to Scott Higginbotham, the STS-133 payload mission manager for NASA at KSC.

“Over 50 protective panels made of Nextel/Kevlar were added to Leonardo. Each panel weighs approximately 1.5 kg/m2. The panels lie underneath the existing modules Multilayer Insulation (MLI) and on top of the pressure vessel of the module,” Higginbotham told me.

“We removed 102 pounds of excess hardware from the vehicle, mostly associated with active cooling of the vehicle that is no longer needed. This allowed us to compensate for the increased weight associated with the added shielding.”

STS-133 is the 39th and last scheduled flight of Discovery. During the 11-day STS-133 mission, the crew of six astronauts will pluck Leonardo from the shuttle payload bay and permanently berth the module at a docking port on the ISS.

See my STS-133 launch pad photos below and this pad panorama courtesy of Nasatech.net 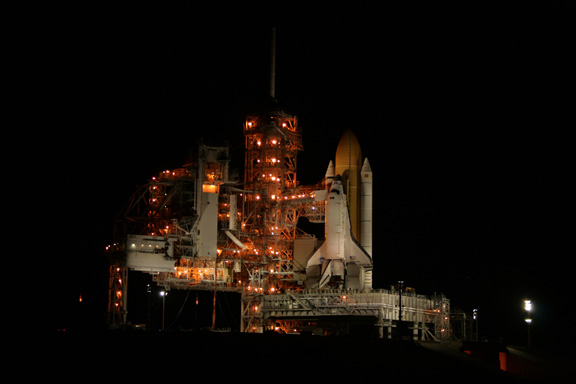 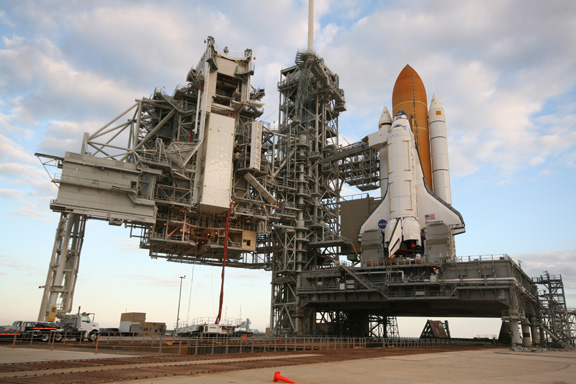 Space shuttle Discovery was unveiled on Oct 6 to allow the STS-133 payload to be loaded later this week. Discovery will carry the Leonardo Permanent Multipurpose Module (PMM) to the ISS. Credit: Ken Kremer 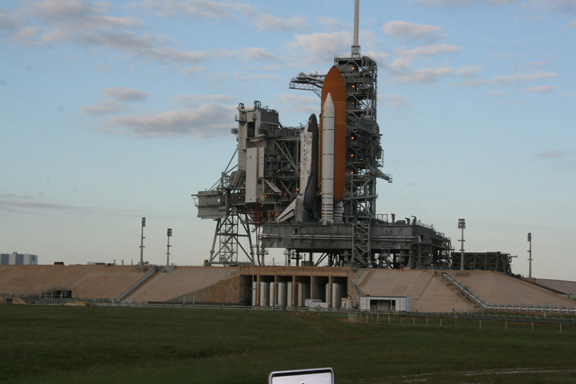 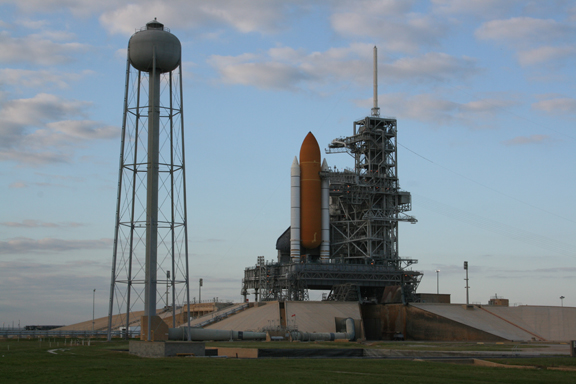 Discovery shuttle on pad 39 A is being prepared for her 39th and last mission of scientific exploration and discovery to the International Space Station on the STS-133 mission. Credit: Ken Kremer 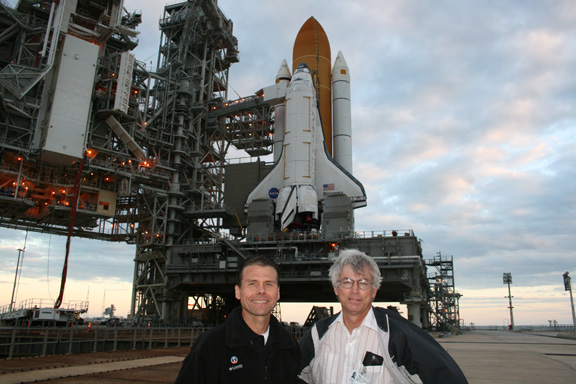 Scott Higginbotham, the STS-133 payload mission manager for NASA and Ken Kremer on top of Launch Pad 39 A with Space Shuttle Discovery for her final mission to space. Thrilling !. Credit: Ken Kremer