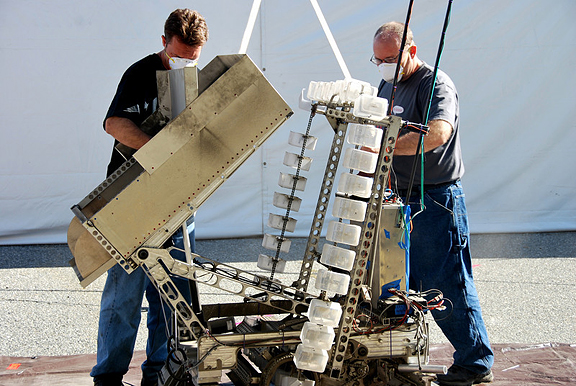 CSA: Nineteen teams pushed their robotic competitors to the limit and three teams claimed a total of $750,000 in NASA prizes for their hard work and innovation at this year’s Regolith Excavation Challenge held at NASA’s Ames Research Center on Moffett Field.

CSA: Nineteen teams pushed their robotic competitors to the limit and three teams claimed a total of $750,000 in NASA prizes for their hard work and innovation at this year’s Regolith Excavation Challenge held at NASA’s Ames Research Center on Moffett Field.

This is the first time in the competition’s three-year history that any teams qualified for a cash prize, the largest NASA has ever given. Announcing the awards and handing over the cash prizes were Lynn Baroff, Executive Director of the California Space Education and Workforce Institute (CSEWI), Andrea Seastrand, Executive Director of the California Space Authority (CSA), and Andrew Petro, Program Executive for the NASA Innovation Incubator and Centennial Challenges.

The winning excavator lifted 965 pounds of regolith material in the allotted time. Runners up excavated 595 pounds and 580 pounds, respectively. Special mention goes to Team E-REX and Eric Jones of Little Rock, AR for transferring the most regolith, 165 pounds, in a single deposit of simulated lunar substance into the official collector bin.

Competitors were required to use mobile, robotic digging machines capable of excavating up to at least 330 pounds of regolith and depositing it into a container in 30 minutes or less. The rules require the remote controlled vehicles to contain their own power sources and weigh no more than 176 pounds.

The team Paul’s Robotics has worked on many robots for a variety of competitions and real-life challenges. “We expected the huge dust plume that was created by our excavator, but managed operations anyway,” stated Paul Ventimiglia, the leader of the team and a tenured Battlebots participant. “What we didn’t expect were the last minute design alterations we were forced to employ.

Terra Engineering is returning for their third time at a prize. Utilizing articulated independent steering and 28 sensors, the digger was a modified version of the team’s entry from last year. “We got the most out of this machine,” Stated Todd Mendenhall, team captain. “It provided us with the expected level of information that we needed to properly operate the hardware.”

Brut Force Digger is the name of the digging rover designed by Team Braundo, an experience prize competitor. “It was built in just a couple of months with surplus materials that we had sitting around our shop,” stated Valerie Mendenhall, a first time competitor. “In this design we applied the ‘simple is better’ approach and, happily, it paid off.”

Twenty-three teams registered for the challenge and traveled from across the country to compete. Of the 23 teams, only 19 competed, one was disqualified as a result of specification violations and the rest withdrew on their own due to last-minute mechanical or logistical problems.

“It’s really encouraging that we saw three teams achieve the minimum requirements and shows that innovation is not only alive but growing,” said Baroff, who also lead the panel of judges. “It’s really great that through this competition NASA is actively seeking to recognize citizen inventors from across the nation whose ideas may one day contribute to space exploration.”

Regolith is difficult to dig because the dust particles want to stick together. The winning teams achieved a real technical accomplishment because their entire robotic system has to be sturdy enough to scoop faux moon dirt, powerful enough to move through the dense surface and still light enough to meet the weight requirements.

“This was an incredibly tough competition and teams came up with fantastic ideas, some of which might find use in future missions to the moon,” said Greg Schmidt, deputy director of the NASA Lunar Science Institute (NLSI). “It’s great to have a winner this year. The biggest win is getting so many talented young people involved in NASA’s mission of exploration.”

“After three years, it’s great to have three cash prize winners,” said Seastrand. “Two of the teams are returning competitors and have learned through this challenge that there is no such thing as failure. It’s great to see them rewarded for their determination, innovation and creativity. A testament to what a tinkerer will do.”

The two-day competition was co-hosted by CSEWI and its sister organization CSA, in collaboration with the NLSI. Diani Building Corporation and Empirical Systems Aerospace also supported the competition.

To watch videos, view images and for more information about the 2009 Regolith Excavation Challenge, visit: http://www.californiaspaceauthority.org/html/regolith2009.html