‘Dead’ Galaxies Aren’t So Dead After All 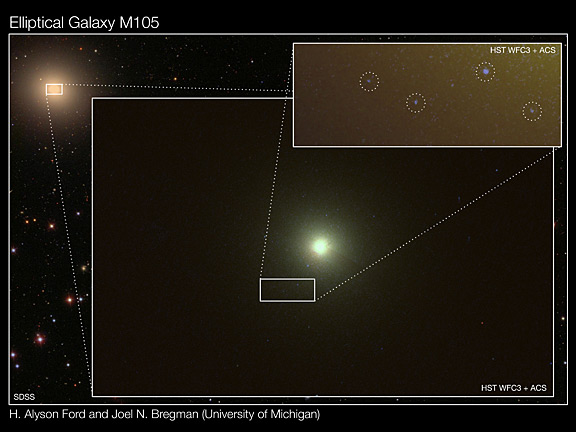 University of Michigan astronomers examined old galaxies and were surprised to discover that they are still making new stars. The results provide insights into how galaxies evolve with time.

U-M research fellow Alyson Ford and astronomy professor Joel Bregman are scheduled to present their findings May 31 at a meeting of the Canadian Astronomical Society in London, Ontario.

University of Michigan astronomers examined old galaxies and were surprised to discover that they are still making new stars. The results provide insights into how galaxies evolve with time.

U-M research fellow Alyson Ford and astronomy professor Joel Bregman are scheduled to present their findings May 31 at a meeting of the Canadian Astronomical Society in London, Ontario.

Using the Wide Field Camera 3 on the Hubble Space Telescope, they saw individual young stars and star clusters in four galaxies that are about 40 million light-years away. One light-year is about 5.9 trillion miles.

“Scientists thought these were dead galaxies that had finished making stars a long time ago,” Ford said. “But we’ve shown that they are still alive and are forming stars at a fairly low level.”

Galaxies generally come in two types: spiral galaxies, like our own Milky Way, and elliptical galaxies. The stars in spiral galaxies lie in a disk that also contains cold, dense gas, from which new stars are regularly formed at a rate of about one Sun per year.

Stars in elliptical galaxies, on the other hand, are nearly all billions of years old. These galaxies contain stars that orbit every which way, like bees around a beehive. Ellipticals have little, if any, cold gas, and no star formation was known.

“Astronomers previously studied star formation by looking at all of the light from an elliptical galaxy at once, because we usually can’t see individual stars,” Ford said. “Our trick is to make sensitive ultraviolet images with the Hubble Space Telescope, which allows us to see individual stars.”

The technique enabled the astronomers to observe star formation, even if it is as little as one Sun every 100,000 years.

Ford and Bregman are working to understand the stellar birth rate and likelihood of stars forming in groups within ellipticals. In the Milky Way, stars usually form in associations containing from tens to 100,000 stars. In elliptical galaxies, conditions are different because there is no disk of cold material to form stars.

“We were confused by some of the colors of objects in our images until we realized that they must be star clusters, so most of the star formation happens in associations,” Ford said.

The team’s breakthrough came when they observed Messier 105, a normal elliptical galaxy that is 34 million light-years away, in the constellation Leo. Though there had been no previous indication of star formation in Messier 105, Ford and Bregman saw a few bright, very blue stars, resembling a single star 10 to 20 times the mass of the Sun.

They also saw objects that aren’t blue enough to be single stars, but instead are clusters of many stars. When accounting for these clusters, stars are forming in Messier 105 at an average rate of one Sun every 10,000 years, Ford and Bregman concluded. “This is not just a burst of star formation but a continuous process,” Ford said.

These findings raise new mysteries, such as the origin of the gas that forms the stars.

“We’re at the beginning of a new line of research, which is very exciting, but at times confusing,” Bregman said. “We hope to follow up this discovery with new observations that will really give us insight into the process of star formation in these ‘dead’ galaxies.”

The University of Western Ontario is proudly hosting the 2011 CASCA conference May 30 to June 2, 2011, in London, Ontario, to celebrate Canadian astronomical and astrophysical research: http://www.casca2011.com/index.html

The Canadian Astronomical Society (http://www.casca.ca) was founded in 1971 and incorporated in 1983 as a society of professional astronomers. The society is devoted to the promotion and advancement of knowledge of the universe through research and education. Membership is open to persons with a professional involvement with these goals in astronomy and the related sciences. The main activities of the Society are its annual scientific meetings, the planning and realization of scientific projects, the support of the scientific activities of its members, and the dissemination of related information among members and other interested persons. The Society supports committees on Optical and Infrared Astronomy, Radio Astronomy, Space Astronomy, Theoretical Astronomy, Education, Heritage, Canadian Grad Students, and Awards. Cassiopeia, the quarterly newsletter of the Society, is published at equinoxes and solstices.