Deep in the main asteroid belt, between Mars and Jupiter, far from Earth, far from the sun, far now even from the giant protoplanet Vesta that it orbited for 14 months, Dawn flies with its sights set on dwarf planet Ceres.
Using the uniquely efficient, whisper-like thrust of its remarkable ion propulsion system, the interplanetary adventurer is making good progress toward its rendezvous with the uncharted, alien world in about nine months.

Dawn’s ambitious mission of exploration will require it to carry out a complex plan at Ceres. In December, we had a preview of the “fapproach phase,” and in January, we saw how the high velocity beam of xenon ions will let the ship slip smoothly into Ceres’s gravitational embrace. We followed that with a description in February of the first of four orbital phases (with the delightfully irreverent name RC3), in which the probe will scrutinize the exotic landscape from an altitude of 8,400 miles (13,500 kilometers). We saw in April how the spacecraft will take advantage of the extraordinary maneuverability of ion propulsion to spiral from one observation orbit to another, each one lower than the one before, and each one affording a more detailed view of the exotic world of rock and ice. The second orbit, at an altitude of about 2,730 miles (4,400 kilometers), known to insiders (like you, faithful reader) as “survey orbit,” was the topic of our preview in May. This month, we will have an overview of the plan for the third and penultimate orbital phase, the “high altitude mapping orbit” (HAMO).

(The origins of the names of the phases are based on ancient ideas, and the reasons are, or should be, lost in the mists of time. Readers should avoid trying to infer anything at all meaningful in the designations. After some careful consideration, your correspondent chose to use the same names the Dawn team uses rather than create more helpful descriptors for the purposes of these logs. What is important is not what the different orbits are called but rather what amazing new discoveries each one enables.)

It will take Dawn almost six weeks to descend to HAMO, where it will be 910 miles (1,470 kilometers) high, or three times closer to the mysterious surface than in survey orbit. As we have seen before, a lower orbit, whether around Ceres, Earth, the sun, or the Milky Way galaxy, means greater orbital velocity to balance the stronger gravitational grip. In HAMO, the spacecraft will complete each loop around Ceres in 19 hours, only one quarter of the time it will take in survey orbit.

In formulating the HAMO plans, Dawn’s human colleagues (most of whom reside much, much closer to Earth than the spacecraft does) have taken advantage of their tremendous successes with HAMO1 and HAMO2 at Vesta. We will see below, however, there is one particularly interesting difference.

As in all observation phases at Ceres (and Vesta), Dawn’s orbital path will take it from pole to pole and back. It will fly over the sunlit side as it travels from north to south and then above the side in the deep darkness of night on the northward segment of each orbit. This polar orbit ensures a view of all latitudes. As Ceres pirouettes on its axis, it presents all longitudes to the orbiting observer. The mission planners have choreographed the celestial pas de deux so that in a dozen revolutions, Dawn’s camera can map nearly the entire surface. 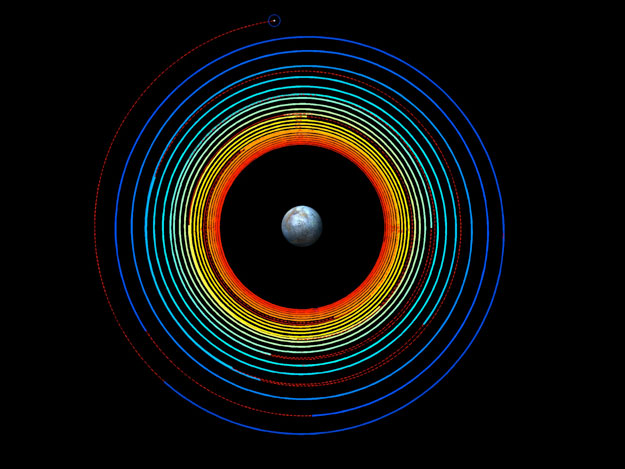 Dawn’s spiral descent from survey orbit to the high altitude mapping orbit. The trajectory progresses from blue to red over the course of the six weeks. The red dashed segments are where the spacecraft is not thrusting with its ion propulsion system (as explained in April). Credit: NASA/JPL

Rather than mapping once, however, the spacecraft will map Ceres up to six times. One of Dawn’s many objectives is to develop a topographical map, revealing the detailed contours of the terrain, such as the depths of craters, the heights of mountains, and the slopes and variations of plains. To do so, it will follow the same strategy employed so successfully at Vesta, by taking pictures at different angles, much like stereo imaging. The spacecraft will make its first HAMO map by aiming its camera straight down, photographing the ground directly beneath it. Then it will map the surface again with the camera pointed in a slightly different direction, and it will repeat this for a total of six maps, or six mapping “cycles.” With views from up to six different perspectives, the landscape will pop from flat images into its full three dimensionality. (As with all the plans, engineers recognize that complex and challenging operations in the forbidding, unforgiving depths of space do not always go as intended. So they plan to collect more data than they need. If some of the images, or even entire maps, are not acquired, there should still be plenty of pictures to use in revealing the topography.)

In addition to acquiring the photos, Dawn will make other measurements in HAMO. During some of the cycles, the camera will use its color filters to glean more about the nature of the surface. The visible and infrared mapping spectrometer will collect spectra to help scientists determine the composition of the surface, its temperature, and other properties.

Exquisitely accurate radio tracking of the spacecraft in its orbit, as indicated by the Doppler shift (the change in frequency, or pitch, as the craft moves toward or away from Earth) and by the time it takes radio signals to make the round trip from Earth, allows navigators to determine the strength of the gravitational tugging. That can be translated into not only the mass of Ceres but also how the mass is distributed in its interior. In August, when we look ahead to the fourth and final science phase of the Ceres mission, the low altitude mapping orbit, we will explain this in greater detail.

Although still too high for anything but the weakest indication of radiation from Ceres, the gamma ray and neutron detector will measure the radiation environment in HAMO. This will yield a useful reference for the stronger signals it will detect when it is closer.

There is a noteworthy difference between how Dawn will operate in HAMO and how it operated in HAMO1 and HAMO2 at Vesta and even how it will operate in survey orbit at Ceres.