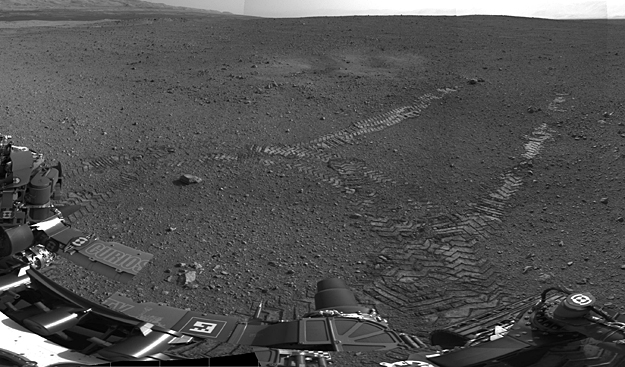 NASA’s Mars rover Curiosity has begun driving from its landing site, which scientists announced today they have named for the late author Ray Bradbury.

Making its first movement on the Martian surface, Curiosity’s drive combined forward, turn and reverse segments. This placed the rover roughly 20 feet (6 meters) from the spot where it landed 16 days ago. (Larger image)

NASA’s Mars rover Curiosity has begun driving from its landing site, which scientists announced today they have named for the late author Ray Bradbury.

Making its first movement on the Martian surface, Curiosity’s drive combined forward, turn and reverse segments. This placed the rover roughly 20 feet (6 meters) from the spot where it landed 16 days ago. (Larger image)

NASA has approved the Curiosity science team’s choice to name the landing ground for the influential author who was born 92 years ago today and died this year. The location where Curiosity touched down is now called Bradbury Landing.

“This was not a difficult choice for the science team,” said Michael Meyer, NASA program scientist for Curiosity. “Many of us and millions of other readers were inspired in our lives by stories Ray Bradbury wrote to dream of the possibility of life on Mars.”

“We have a fully functioning mobility system with lots of amazing exploration ahead,” Heverly said.

Curiosity will spend several more days of working beside Bradbury Landing, performing instrument checks and studying the surroundings, before embarking toward its first driving destination approximately 1,300 feet (400 meters) to the east-southeast.

“Curiosity is a much more complex vehicle than earlier Mars rovers. The testing and characterization activities during the initial weeks of the mission lay important groundwork for operating our precious national resource with appropriate care,” said Curiosity Project Manager Pete Theisinger of JPL. “Sixteen days in, we are making excellent progress.”

The science team has begun pointing instruments on the rover’s mast for investigating specific targets of interest near and far. The Chemistry and Camera (ChemCam) instrument used a laser and spectrometers this week to examine the composition of rocks exposed when the spacecraft’s landing engines blew away several inches of overlying material.

The instrument’s principal investigator, Roger Weins of Los Alamos National Laboratory in New Mexico, reported that measurements made on the rocks in this scoured-out feature called Goulburn suggest a basaltic composition. “These may be pieces of basalt within a sedimentary deposit,” Weins said.

Curiosity began a two-year prime mission on Mars when the Mars Science Laboratory spacecraft delivered the car-size rover to its landing target inside Gale Crater on Aug. 5 PDT (Aug. 6 EDT). The mission will use 10 science instruments on the rover to assess whether the area has ever offered environmental conditions favorable for microbial life.

In a career spanning more than 70 years, Ray Bradbury inspired generations of readers to dream, think and create. A prolific author of hundreds of short stories and nearly to 50 books, as well as numerous poems, essays, operas, plays, teleplays, and screenplays, Bradbury was one of the most celebrated writers of our time.

His groundbreaking works include “Fahrenheit 451,” “The Martian Chronicles,” “The Illustrated Man,” “Dandelion Wine,” and “Something Wicked This Way Comes.” He wrote the screenplay for John Huston’s classic film adaptation of “Moby Dick,” and was nominated for an Academy Award. He adapted 65 of his stories for television’s “The Ray Bradbury Theater,” and won an Emmy for his teleplay of “The Halloween Tree.”

JPL manages the Mars Science Laboratory/Curiosity for NASA’s Science Mission Directorate in Washington. The rover was designed, developed and assembled at JPL.