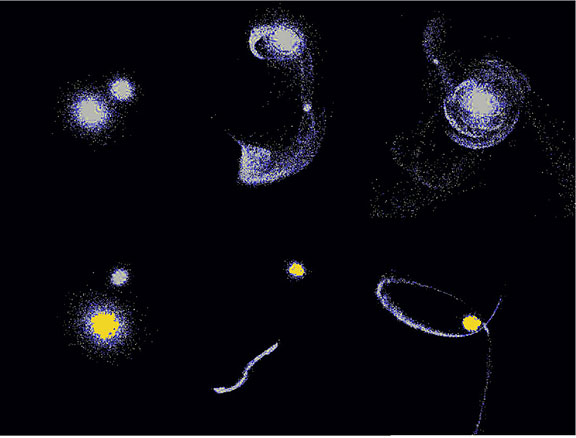 A study published this week in the journal Nature offers an explanation for the origin of dwarf spheroidal galaxies. The research may settle an outstanding puzzle in understanding galaxy formation.

A study published this week in the journal Nature offers an explanation for the origin of dwarf spheroidal galaxies. The research may settle an outstanding puzzle in understanding galaxy formation.

Dwarf spheroidal galaxies are small and very faint, containing few stars relative to their total mass. They appear to be made mostly of dark matter – a mysterious substance detectable only by its gravitational influence, which outweighs normal matter by a factor of five to one in the universe as a whole.

Astronomers have found it difficult to explain the origin of dwarf spheroidal galaxies. Previous theories require that dwarf spheroidals orbit near large galaxies like the Milky Way, but this does not explain how dwarfs that have been observed in the outskirts of the “Local Group” of galaxies could have formed.

“These systems are ‘elves’ of the early universe, and understanding how they formed is a principal goal of modern cosmology,” said lead author Elena D’Onghia of the Harvard-Smithsonian Center for Astrophysics (CfA).

The team found that the galactic encounters excite a gravitational process which they term “resonant stripping,” leading to the removal of stars from the smaller dwarf over the course of the interaction and transforming it into a dwarf spheroidal.

“Like in a cosmic dance, the encounter triggers a gravitational resonance that strips stars and gas from the dwarf galaxy, producing long visible tails and bridges of stars,” explained D’Onghia.

“This mechanism explains the most important characteristic of dwarf spheroidals, which is that they are dark-matter dominated,” added co-author Gurtina Besla.

The long streams of stars pulled off by gravitational interactions should be detectable. For example, the recently discovered bridge of stars between Leo IV and Leo V, two nearby dwarf spheroidal galaxies, may have resulted from resonant stripping.

The paper describing these results was authored by Elena D’Onghia, Gurtina Besla, Thomas J. Cox, and Lars Hernquist, all of the CfA.

Images to accompany this release are online at http://www.cfa.harvard.edu/news/2009/pr200917_images.html