On October 19, 2014, at 18:32 UTC, Comet Siding Spring (2013A1) will pass Mars at roughly 150,000 kilometers, about 1/3 the distance between Earth and the Moon, in a direction putting it on a track for its dust to pass over the Martian North Pole, possibly endangering, over a thirty minute window, the collection of orbital spacecraft currently on station in that region.
This update was from this morning’s panel “Robotic Mars Explorers Encounter Comet Siding Spring” at the AIAA SPACE 2014 forum in San Diego. Spacecraft potentially endangered are: NASA’s MAVEN and Odyssey systems; the European Space Agency’s Mars Express, and India’s Mars Orbiter Mission.

However, concerns about the dust may turn out to be “much ado about nothing,” as Paul Chodas, a senior scientist at NASA’s Jet Propulsion Laboratory (JPL), explained that “multiple studies at JPL, the University of Maryland, and other sites have confirmed that the comet’s dust trail is unlikely to threaten the orbiting systems,” explaining that “the comet did not begin to ejaculate dust the critical distance of between 15 and 20 astronomical units (AU) from the sun, which would have had to have happened for the dust cloud to fully impact the orbiters’ operations,” and noting that “the comet’s bulk dust is being ejected at speeds below 1 meter per second,” well below the speeds where it would pose a threat to systems. 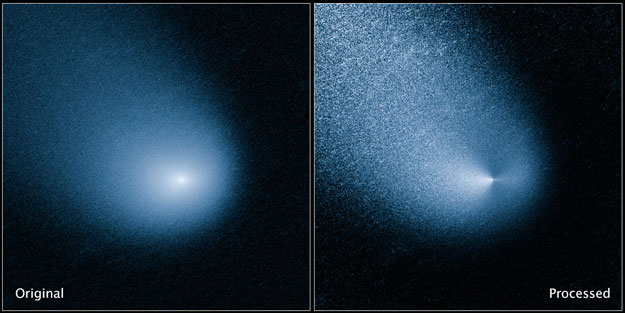 Based on the data, researchers have concluded that the cloud will pass up and over Mars, barely skirting a 1 kilometer edge of the orbiters’ operating zone for a thirty minute time period, prompting Joseph Guinn, manager of the mission design and navigation section, at NASA’s Jet Propulsion Laboratory to joke that the situation is not one of “seven minutes of terror, but more like thirty minutes of concern.” Chodas added, however, that if “the models are wrong, it will result in particles ranging in size between 1 millimeter and 1, about the size range of a sunflower seed to a grain of rice,” impacting the orbiters like “cannonballs, causing extensive, most likely catastrophic, damage.”

Charles D. Edwards, Jr., chief technologist of the Mars Exploration Program and telecommunications engineer at NASA JPL explained that “despite the low risk of impact posed by the dust, NASA, ESA and ISRO, did develop plans to shield the orbiters during the thirty second window,” with each agency having plans to adjust the attitudes of their assets, including “hiding” them behind Mars during the window to shield them from any impacts. The mitigation plans are especially critical for MAVEN and the Mars Orbiter Mission, which will only be arriving on station shortly before the comet’s flyby.

Edwards clarified that with the minimized dust risk, the researchers can now focus on gleaning valuable scientific data from the flyby, including: Siding Spring’s spin speed, nucleus shape, corona composition.” Richard Zurek, chief scientist of the Mars Exploration at JPL, noted that this is “a unique chance to get a first ever resolution of the nucleus of a long-period comet, especially as the nucleus is thought to be a kilometer wide.” Additional areas of study, according to Zurek, “will be the comet’s effect on the upper Martian atmosphere, at about 150 kilometers, especially allowing scientists to better understand how atoms potentially escape the Martian atmosphere, as well the potential for the comet’s ejaculate to form cirrus clouds above Mars.” Cameras on the Curiosity and Opportunity rovers will also provide excellent images of the comet.

Zurek concluded the session by warning that the data from the fly-by can only come about if the dust models are right, warning that there are “no guarantees here, all the dice are being thrown, but it only takes one particle; the chance is very low, but it’s not zero that we get damage.”

By Duane Hyland, Special to SpaceRef