Cause of Supernova SN 1006 Revealed 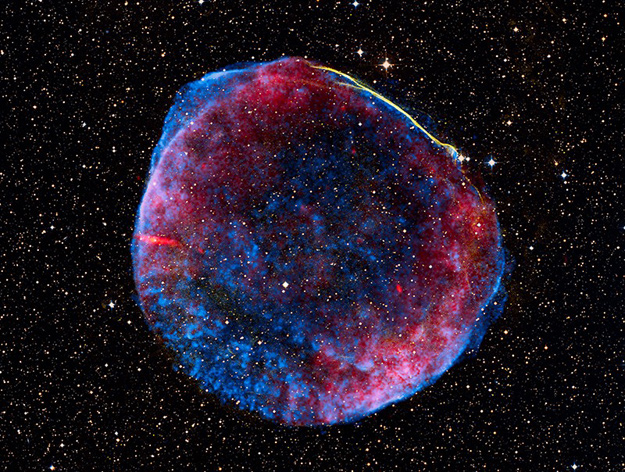 Between 30 April and 1 May of the year 1006 the brightest stellar event ever recorded in history occurred: a supernova, or stellar explosion, that was widely observed by various civilizations from different places on the Earth. More than a thousand years later a team led by researchers from the University of Barcelona, the Instituto de Astrofisica de Canarias (IAC) and the CSIC has found that the supernova of 1006 (SN 1006) probably occurred as a result of the merger of two white dwarfs. The finding has been published in and made the front cover of today’s edition of the international science journal Nature.

Between 30 April and 1 May of the year 1006 the brightest stellar event ever recorded in history occurred: a supernova, or stellar explosion, that was widely observed by various civilizations from different places on the Earth. More than a thousand years later a team led by researchers from the University of Barcelona, the Instituto de Astrofisica de Canarias (IAC) and the CSIC has found that the supernova of 1006 (SN 1006) probably occurred as a result of the merger of two white dwarfs. The finding has been published in and made the front cover of today’s edition of the international science journal Nature.
Different communities of astronomers all over the world observed the supernova of the year 1006. Some of them, including Chinese astronomers, highlighted the fact that the astronomical event was visible for three years. The most explicit record, made by the Egyptian doctor and astronomer Ali ibn Ridwan (988-1061), notes that the phenomenon was about three times brighter than Venus, and that it emitted light of a quantity equivalent to almost a quarter of the Moon’s brightness.

As co-director of the work, Pilar Ruiz-Lapuente, a researcher at the Institute of Cosmos Sciences (ICCUB) and the Instituto de Fisica Fundamental (IFF-CSIC), explains, “In this work the existing stars in the area have been studied, regarding distance and possible contamination by elements of the supernova, and the results show that there is no star that could be considered the progenitor of this explosion”.

The IAC researcher and first author of the paper Jonay Gonzalez Hernandez adds, “We have conducted an exhaustive exploration of the area around where the explosion of the supernova of 1006 occurred and have found nothing, which invites us to think that this event was probably the result of a collision and merger of two white dwarf stars of similar mass”.

The supernova SN 1006 is of the type that occurs in binary systems, those consisting of two astronomical objects bound together by their gravitational pull. These systems can be formed by a white dwarf and a normal stellar companion that contributes the matter necessary for it to reach a critical mass of 1.4 times the mass of the Sun, the so-called Chandrasekhar limit. Once this mass is reached, the stars explode in a supernova. Another possibility is that the system comprises two white dwarfs that eventually merge to create a supernova. According to Ruiz-Lapuente, “This new result, together with others previous, suggests that the merger of white dwarfs could be a common pathway that leads to these violent thermonuclear explosions”.

Supernovae are explosions that occur between stars in the last stage of their lives. They produce a large release of energy and expel huge amounts of matter at high velocity into the interstellar medium. Specifically, a supernova of the type of that occurred in 1006 is caused by a thermonuclear explosion when a white dwarf’s mass reaches the Chandrasekhar limit, most likely expelling all its matter and leaving no stellar remnant of the explosion.

The final clue that led the researchers to conclude that in this case there had been a merger of two white dwarfs was that this supernova, about 7,000 light-years from Earth, has no stellar companion to the white dwarf progenitor. However, an explosion produced by the merger of two white dwarfs leaves no trace, except for the supernova remnant that can be studied until centuries later, as in the case of SN 1006, one of only four historical supernovae of this type that have occurred in the Milky Way.

The study utilized an UVES high-resolution spectrograph installed in one of four European VLT telescopes, of 8 meters in diameter, belonging to the European Southern Observatory (ESO, Chile), with which the stars around the site of the explosion were observed. The spectroscopic and photometric data obtained were analyzed in detail by Gonzalez Hernandez: “Analysis of the stars in the area of the explosion discarded them as possible companions of the progenitor star of the supernova of 1006”, said the expert.

The astrophysicists analyzed different types of stars in the area: giants, subgiants and dwarfs. According to Gonzalez, “Only four giant stars are found at the same distance as the remnant of the supernova of 1006, some 7,000 light-years from Earth, but the numerical simulations do not predict a companion of these characteristics. The appearance of a possible stellar companion, even a thousand years after the violent impact of an explosion of this type, would not be that of a normal giant star”.

White dwarfs are stars in the last stage of their lives of a mass less than 1.4 times that of the Sun. These stars, or stellar remnants, have exhausted their energy sources and are in a process of very gradual cooling. Stars of less than 8-10 solar masses, that is, the vast majority of stars in the Milky Way, as well as the Sun, end their life cycles as white dwarfs.

From the theoretical point of view the study, which also involved the UB researchers Ramon Canal and Javier Mendez, also shows that the merger of stars of this type is consistent with existing stellar models.

Companion Star of the Supernova of 1572

In 1997 Ruiz-Lapuente began study of the remnants of Type Ia supernovae with this method of searching for progenitor stars. To date, five supernovae have been studied, of which a companion has only been found in the case of Tycho Brahe’s 1572 supernova, SN 1572. As the renowned astrophysicist explains, “We intend to continue studying supernovae remnants to determine the frequency of the merger of white dwarfs as a pathway. The next will be Kepler’s supernova of 1604”.