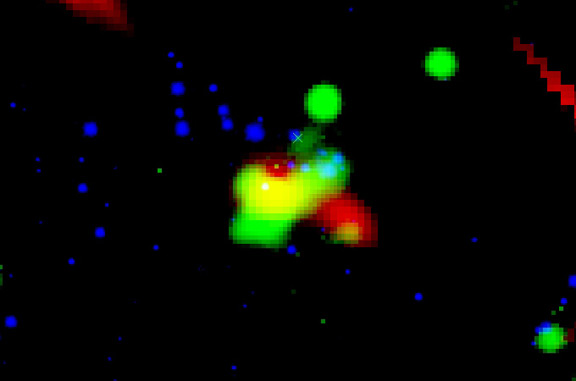 Astronomer Joel Green of The University of Texas at Austin has been following a rare massive flare from a nascent star similar to the early Sun using the European Space Agency’s infrared Herschel Space Observatory and a cadre of other telescopes. Green has found that this protostar, called HBC 722, is situated in a tangled web of gas and protostars tightly packed into a small area. Green’s research is published in today’s issue of The Astrophysical Journal Letters.

Astronomer Joel Green of The University of Texas at Austin has been following a rare massive flare from a nascent star similar to the early Sun using the European Space Agency’s infrared Herschel Space Observatory and a cadre of other telescopes. Green has found that this protostar, called HBC 722, is situated in a tangled web of gas and protostars tightly packed into a small area. Green’s research is published in today’s issue of The Astrophysical Journal Letters.

HBC 722 lies 2,000 light-years away in the “Gulf of Mexico” region of the North America Nebula (NGC 7000), in the constellation Cygnus, the swan. In early 2009, it appeared to be an ordinary young star in a cloud of similarly young stars. Like most stars less than a few million years old, HBC 722 is surrounded by a disk of gas and dust, perhaps beginning to form a planetary system. It began to brighten, slowly at first, increasing dramatically during the summer of 2010. By late September 2010, it was 20 times brighter than it had been the year before. Since that time, it has slowly begun to settle back down.

The event provided astronomers a unique opportunity to observe the evolution of a flaring young star, an event observed on average only once per decade. These objects are called FU Orionis (FUor) objects, after the prototype found in the constellation Orion in 1936. FU Orionis-type stars are natural laboratories to test the effects of heating on the chemistry and physics of disks and their surrounding envelopes.

The HBC 722 flare is the first such event discovered in more than 30 years, and likely the only one that will occur during the lifetime of the Herschel Space Observatory.

Green received permission to view HBC 722 with Herschel as a “target of opportunity” quickly after it was discovered. Herschel turned its PACS, SPIRE, and HIFI instruments on this eruption of light from a young star in the midst of a volatile stellar nursery to help astronomers piece together the chemistry of this active stellar region.

The quick reaction of Herschel and other observatories has allowed astronomers to observe its behavior from early stages, within a few months of its brightening episode. It has been dimming faster than other FUor objects, which are still bright decades after their eruption.

What happened to HBC 722 to cause this flare? It is likely that a large amount of material built up in its surrounding disk, and suddenly reached a critical point where it overflowed and poured onto the star at a rate twenty times greater than usual, releasing vast amounts of heat and ejecting excess material and momentum into the surrounding cloud. The consequences of this event have yet to manifest fully.

“With Herschel we could see the effect the outburst has on the nearby gas and dust,” Green said. “We want to see if the sudden change in the star’s brightness affects its environment and compare it to older flares that have had longer to decay from their outbursts. We also want to compare to stars that are not currently in outburst.”

Flares of this magnitude are rare because they are short-lived compared to the relatively quiet states that characterize most young stars. Outbursts are often considered to be an important part of the process by which a young star acquires its final mass, through a small trickle of material punctuated by short, repeated floods.

Herschel revealed the busy environment of HBC 722, comprised of large amounts of molecular material such as carbon monoxide and water, thought to be heated by ultraviolet light from the evolving stars in the vicinity. In Herschel’s infrared view, the flare of HBC 722 may highlight vast flows of material from nearby colder and even younger stars. In the future the increased radiation from HBC 722 may further heat the gas in the vicinity as it flows past.

Coordinating with observations by numerous ground-based telescopes, astronomers are looking for signs of the shockwaves that should have been launched from HBC 722. Green will view HBC 722 with Herschel again in June and expects by that time he might observe evidence of the jet that has likely been building since the flare began, but so far has been too small to detect.

A wealth of data on HBC 722 existed before the flare. Green’s current data from Herschel and several other ground and space-based telescopes, together with planned follow-up, will make this will be the most-observed FUor object yet. This data timeline will help astronomers better understand the cause of such flares, which are currently thought to originate when large amounts of gas fall from the circumstellar disk onto the protostar.

Image caption: This composite image reveals the hidden power sources of this volatile star forming region. Blue represents starlight as seen by the U.K. Infrared Telescope (UKIRT), green is Herschel’s view of the heated gas by ultraviolet radiation from protostars, and red is cooler gas seen by the Caltech Submillimeter Observatory. X marks the outburst, an area astronomers will keep an eye on. (Credit: J. Green, Univ. of Texas/ESA/UKIRT/CSO)

Herschel is an ESA space observatory with science instruments provided by European-led Principal Investigator consortia and with important participation from NASA.