With the prospect of a weaker domestic market for Canada’s space sector companies, foreign markets become all that more important. Which is why this past week many Canadian companies trekked to Colorado Springs, Colorado for the annual National Space Symposium.
The National Space Symposium is the largest annual space industry event held each year in the United States with over 9000+ participants and is organized by the Space Foundation. According to the Space Foundation this years Symposium included 800+ organizations, 600+ students, 300+ volunteers, 165+ exhibitors, 100+ speakers representing 30+ countries.

Canada was represented by the Trade Commissioner Service and had a booth in the exhibitor’s area. Companies represented at the booth included ABB Canada, the Aerospace Industries Association of Canada (AIAC), Blackberry, Xiphos and Neptec. Other Canadian companies who had their own booth included Magellan Aerospace, MacDonald, Dettwiler and Associates Ltd. (MDA) and COM DEV represented through the COM DEV USA booth.

Manning the Canadian booth at various times were representatives of the companies along with Stephen Davis, Canada’s Trade Commissioner at the Consulate General of Canada in Denver. Representing Foreign Affairs and International Trade Canada was Rachelle Monniaux. 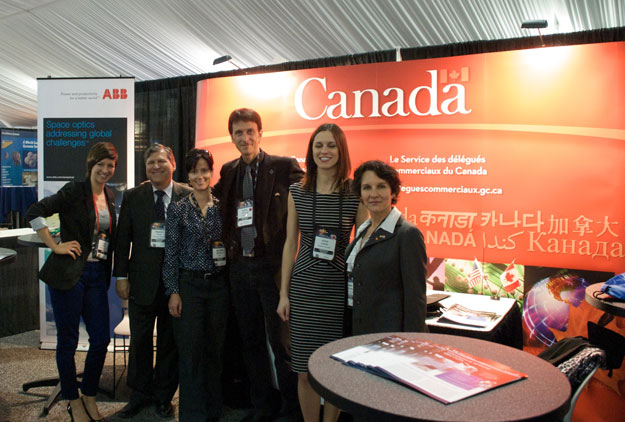 Some of the Canadians represented at the National Space Symposium.

The Canadian Space Agency (CSA) was also represented as Chummer Farina, Vice-President of policy, external and government relations, communications and public affairs was on the Space Agency Leaders panel. Also there from the CSA’s Washington office was Bill McKay.

Canada’s presence could be felt more than just on the trade show floor. While the Symposium has a full lineup of sessions each day, companies also reserved rooms for private meetings to discuss business, which is essentially what everyone is here for. The networking opportunities don’t end with the sessions each day. No, after the sessions comes the mandatory pre-dinner networking receptions. And on the day before the Symposium ended, Thursday the 19th, is the official company receptions, though through-out the week there are invitation only receptions as well.

On “reception day”, Canada was the first to hold its reception. Starting at 5:00 pm it drew a large crowd as I found out. Held at the inspiring Carriage Museum, there appeared to be well over 200 people at the height of the reception. It was the culmination of many great opportunities for Canadians to mingle with the mostly U.S. crowd and Stephen Davis gave away a Blackberry Playbook after his speech. That was a good marketing touch by Blackberry. 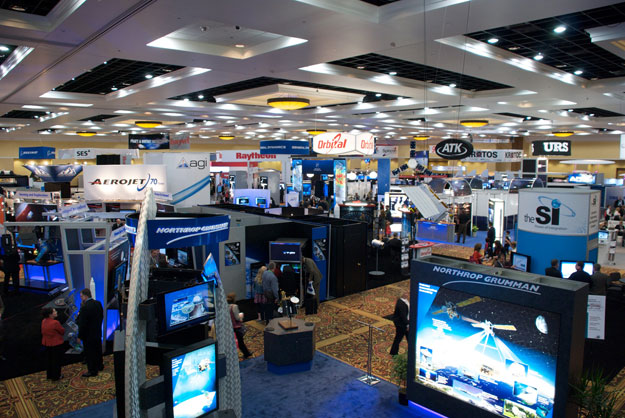 Some of the 165 exhibitors in the Ball Aerospace sponsored main exhibit hall. 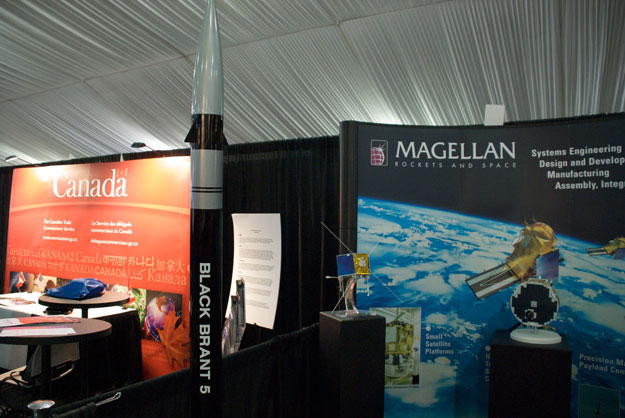 The Canada and Magellan Aerospace booths side by side.