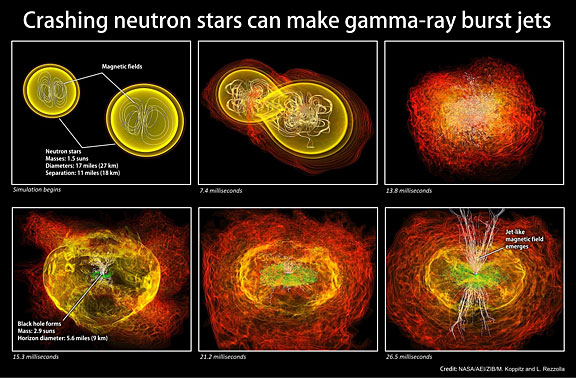 A new supercomputer simulation shows the collision of two neutron stars can naturally produce the magnetic structures thought to power the high-speed particle jets associated with short gamma-ray bursts (GRBs). The study provides the most detailed glimpse of the forces driving some of the universe’s most energetic explosions.

A new supercomputer simulation shows the collision of two neutron stars can naturally produce the magnetic structures thought to power the high-speed particle jets associated with short gamma-ray bursts (GRBs). The study provides the most detailed glimpse of the forces driving some of the universe’s most energetic explosions.

The state-of-the-art simulation ran for nearly seven weeks on the Damiana computer cluster at the Albert Einstein Institute (AEI) in Potsdam, Germany. It traces events that unfold over 35 milliseconds — about three times faster than the blink of an eye.

GRBs are among the brightest events known, emitting as much energy in a few seconds as our entire galaxy does in a year. Most of this emission comes in the form of gamma rays, the highest-energy form of light.

“For the first time, we’ve managed to run the simulation well past the merger and the formation of the black hole,” said Chryssa Kouveliotou, a co-author of the study at NASA’s Marshall Space Flight Center in Huntsville, Ala. “This is by far the longest simulation of this process, and only on sufficiently long timescales does the magnetic field grow and reorganize itself from a chaotic structure into something resembling a jet.”

GRBs longer than two seconds are the most common type and are widely thought to be triggered by the collapse of a massive star into a black hole. As matter falls toward the black hole, some of it forms jets in the opposite direction that move near the speed of light. These jets bore through the collapsing star along its rotational axis and produce a blast of gamma rays after they emerge. Understanding short GRBs, which fade quickly, proved more elusive. Astronomers had difficulty obtaining precise positions for follow-up studies.

That began to change in 2004, when NASA’s Swift satellite began rapidly locating bursts and alerting astronomers where to look.

“For more than two decades, the leading model of short GRBs was the merger of two neutron stars,” said co-author Bruno Giacomazzo at the University of Maryland and NASA’s Goddard Space Flight Center in Greenbelt, Md. “Only now can we show that the merger of neutron stars actually produces an ultrastrong magnetic field structured like the jets needed for a GRB.”

A neutron star is the compressed core left behind when a star weighing less than about 30 times the sun’s mass explodes as a supernova. Its matter reaches densities that cannot be reproduced on Earth — a single spoonful outweighs the Himalayan Mountains.

The simulation began with a pair of magnetized neutron stars orbiting just 11 miles apart. Each star packed 1.5 times the mass of the sun into a sphere just 17 miles across and generated a magnetic field about a trillion times stronger than the sun’s.

In 15 milliseconds, the two neutron stars crashed, merged and transformed into a rapidly spinning black hole weighing 2.9 suns. The edge of the black hole, known as its event horizon, spanned less than six miles. A swirling chaos of superdense matter with temperatures exceeding 18 billion degrees Fahrenheit surrounded the newborn black hole. The merger amplified the strength of the combined magnetic field, but it also scrambled it into disarray.

Over the next 11 milliseconds, gas swirling close to the speed of light continued to amplify the magnetic field, which ultimately became a thousand times stronger than the neutron stars’ original fields. At the same time, the field became more organized and gradually formed a pair of outwardly directed funnels along the black hole’s rotational axis.

This is exactly the configuration needed to power the jets of ultrafast particles that produce a short gamma-ray burst. Neither of the magnetic funnels was filled with high-speed matter when the simulation ended, but earlier studies have shown that jet formation can occur under these conditions.

“By solving Einstein’s relativity equations as never before and letting nature take its course, we’ve lifted the veil on short GRBs and revealed what could be their central engine,” said Luciano Rezzolla, the study’s lead author at AEI. “This is a long-awaited result. Now it appears that neutron star mergers inevitably produce aligned jet-like structures in an ultrastrong magnetic field.”

The study is available online and will appear in the May 1 edition of The Astrophysical Journal Letters.

The authors note the ultimate proof of the merger model will have to await the detection of gravitational waves — ripples in the fabric of space-time predicted by relativity. Merging neutron stars are expected to be prominent sources, so the researchers also computed what the model’s gravitational-wave signal would look like. Observatories around the world are searching for gravitational waves, so far without success because the signals are so faint.

For more information, video and images associated with this release, visit: http://www.nasa.gov/topics/universe/features/gamma-ray-engines.html