Ron Garan used to be an astronaut. Now he helps people in remote African communities obtain fresh drinking water. Yet he still has his head back amongst the stars. How he came to this point is the subject of his book “The Orbital Perspective”.
The core meme in Ron Garan’s book – the phenomenon he refers to as the “orbital perspective” – is the end result of living in space while orbiting one’s home planet. Only a few hundred miles away at all times, due to speed and location, it is close – yet so far away. An emergent property of this experience has often been called the “Overview Effect“. Garan came up with his own flavor thereof and he explains it in enticing detail and emotion in this book.

While many people who have spent time in space have come back with altered perceptions and equipped with a new perspective of our home planet, few manage to express that change in perspective as well as Garan does. Moreover, even fewer actually take that enhanced perspective and put it into action – again, as Garan does.

Perhaps the most pervasive theme in Garan’s writing about the orbital perspective is collaboration – across disciplines, cultures, geography, income, and politics. To make his point he delves into the challenges that faced the International Space Station program. Curiously, as relations between the West and Russia have deteriorated due to Ukraine, the one joint endeavor that continues, more or less unaffected, is the ISS program. Therein lies lessons for many other projects, according to Garan.

One time when we were having lunch, Garan told me that he thought that his greatest contribution(s) to society as a person still laid ahead and that his astronaut career, while enjoyable, was just one step in his life. Although he does not make this comment in the book, I think it comes through when it comes to his world view and how he presents it. Flying in space was a humbling enabler for Garan. Garan’s take on his experience at NASA is refreshing when compared to many other astronauts who see their NASA career as a high point and now only seek to run out the clock at a large aerospace company pulling in the big bucks.

Even before he left NASA he had already set up non-profit organizations and participated in a variety of efforts in the Third World including water supply projects in Rwanda. A stint at USAID (on loan from NASA) provided him with additional experience bringing technology to places that are in dire need of it. It is this application of First World technology in Third World locations where it becomes clear that one person can make a difference.

Garan’s book is one of the better books written by people who have lived in space. While many astronauts can recount events and their importance, there is often a certain lack of soul behind these recollections – and the books are often formulaic with heavy editing or ghost writing – a process which tends to drain that personal touch from what should properly be a personal recollection.

With regard to the orbital perspective, there are others who have had this epiphany. The one person in particular who comes to mind is Apollo 9 astronaut Rusty Schweickart whose reflections upon returning to Earth were probably the first – and certainly the most well-expressed wherein a human saw his world from afar, anew, as a whole system. Small wonder that Schweickart was a friend and collaborator with iconic Whole Earth Catalog founder Stewart Brand and the equally iconic California governor Jerry Brown. 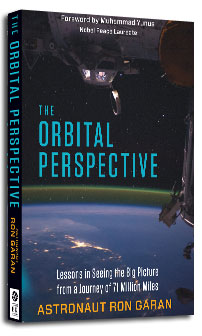 Garan certainly got the same messages that Schweickart got – enhanced by a much longer stay in space. In preparation for his ISS visit (his second space mission) he worked with people outside of NASA to set up the Fragile Oasis website. This website took a fresh approach that is never seen with a website developed internally at NASA.

Former NASA Administrator Sean O’Keefe was fond of referencing his Jesuit education – often noting that he was taught to make converts “one convert at a time”. Garan now fills his time out with a plethora of educational and charitable activities that send him all over the world. Using a range of tools – print and online – he manages to take O’Keefe’s approach and turbocharge it on a global scale. Yet he never manages to lose that one-on-one focus that permeates this book.

Put a humanitarian into a spacesuit and keep sending them into space and books like this are bound to be written. You see, global problems can have a personal solution – and Ron Garan wants to show you how to do exactly that.

You can buy his book here