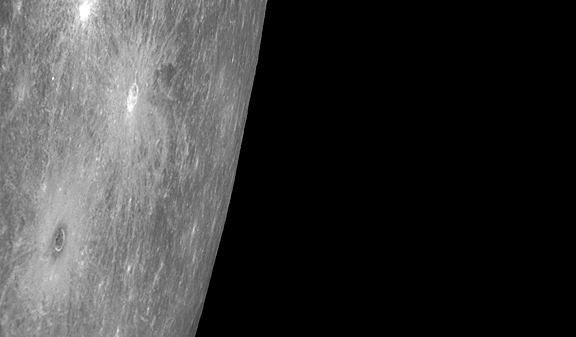 On September 29, the MESSENGER spacecraft will pass by Mercury for the third time, flying 141.7 miles above the planet’s rocky surface for a final gravity assist that will enable it to enter orbit about Mercury in 2011. This encounter will also provide new observational opportunities for MESSENGER’s Magnetometer, designed to determine the structure and origin of Mercury’s intrinsic magnetic field.

On September 29, the MESSENGER spacecraft will pass by Mercury for the third time, flying 141.7 miles above the planet’s rocky surface for a final gravity assist that will enable it to enter orbit about Mercury in 2011. This encounter will also provide new observational opportunities for MESSENGER’s Magnetometer, designed to determine the structure and origin of Mercury’s intrinsic magnetic field.

The comparison of magnetosphere observations from MESSENGER’s first flyby in January 2008 with data from the probe’s second pass in October 2008 provided key new insight into the nature of the planet’s internal magnetic field and revealed new features of Mercury’s magnetosphere, explains Brian Anderson, of the Johns Hopkins University Applied Physics Laboratory (APL) in Laurel, Md.

“MESSENGER’s first flyby of Mercury and Mariner 10’s encounters with the planet provided data only from Mercury’s eastern hemisphere,” says Anderson, MESSENGER’s Deputy Project Scientist. “The October 2008 flyby provided the first measurements from Mercury’s western hemisphere, and scientists learned that the planet’s magnetic field is highly symmetric. This finding is significant for the planet’s internal field because it implies that the dipole is even more closely aligned with the planet’s rotation axis than we could conclude before the second flyby.”

The probe’s third flyby of Mercury next month will take it again over the planet’s western hemisphere, and the observations will be used to refine the estimate of the planetary magnetic field, Anderson explains.

“The previous flybys yielded significant insight into the dynamics of Mercury’s magnetosphere and its boundaries,” Anderson says. “During the second flyby a plasmoid and a series of traveling compression regions were observed in Mercury’s magnetotail, and a large flux transfer event was observed at the dayside magnetopause. These observations proved that the solar wind interaction, under the right circumstances, can drive intense magnetic reconnection at rates 10 times the rates observed at Earth.”

The behavior during the second flyby was markedly different from that found in the first flyby, demonstrating the profound influence of the solar wind environment on Mercury’s magnetosphere. “The third flyby is the last opportunity to survey the magnetotail and magnetopause regions in the equatorial plane, and the contrast in the system’s structure under different solar wind conditions already observed make it likely that the third flyby will yield new insights and perhaps more surprises for the dynamics of this smallest and most highly variable of the solar system’s planetary magnetospheres,” Anderson says.

As with the previous two flybys, the Magnetometer will record the magnetic field at the highest available observation rate of 20 vector magnetic field samples per second for a period of twelve hours centered on the time of closest approach. “This observing plan guarantees the highest possible science return from the encounter and will provide key observations to guide the magnetic field investigation plan for the prime orbital phase of the mission,” Anderson says.

The crater in the lower left corner of this image is Berkel, recently named for Turkish painter and printmaker Sabri Berkel (1909-1993). The crater contains dark material in its center and in a ring immediately surrounding it. Moreover, Berkel is surrounded by a blanket of bright ejecta and a system of bright rays. Other craters on Mercury’s surface, such as Basho, also exhibit both bright rays and dark halos. In contrast, two neighboring craters in this image (indicated by white arrows) have bright rays but lack dark halos. Members of the MESSENGER Science Team are investigating why some craters contain dark material while others do not, and what that means for the nature and structure of Mercury’s crust. To view other images released over the summer, go online to http://messenger.jhuapl.edu/gallery/sciencePhotos/index.php. 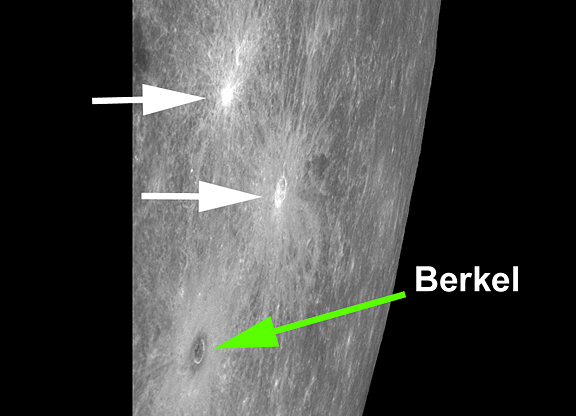 MESSENGER (MErcury Surface, Space ENvironment, GEochemistry, and Ranging) is a NASA-sponsored scientific investigation of the planet Mercury and the first space mission designed to orbit the planet closest to the Sun. The MESSENGER spacecraft launched on August 3, 2004, and after flybys of Earth, Venus, and Mercury will start a yearlong study of its target planet in March 2011. Dr. Sean C. Solomon, of the Carnegie Institution of Washington, leads the mission as Principal Investigator. The Johns Hopkins University Applied Physics Laboratory built and operates the MESSENGER spacecraft and manages this Discovery-class mission for NASA.