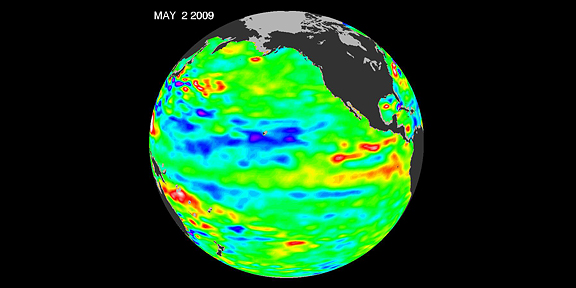 Summer soon begins in the Northern Hemisphere and, on June 1st, the Atlantic hurricane season kicks off. What do Atlantic and Pacific Ocean surface temperatures and heights tell forecasters about what they can expect this season? Although peak hurricane time doesn’t arrive until late-summer and early fall, there are some oceanic signals that give a hint of coming activity and NASA satellites are helping to provide that data.

Summer soon begins in the Northern Hemisphere and, on June 1st, the Atlantic hurricane season kicks off. What do Atlantic and Pacific Ocean surface temperatures and heights tell forecasters about what they can expect this season? Although peak hurricane time doesn’t arrive until late-summer and early fall, there are some oceanic signals that give a hint of coming activity and NASA satellites are helping to provide that data.

NASA has several satellites in orbit around the Earth that are used to study different aspects of these tropical cyclones, and NASA scientists conduct hurricane research all through the year. Satellites include the Tropical Rainfall Measuring Mission satellite, Aqua, QuikScat, CloudSat, the Geostationary Operational Environmental Satellite (GOES), JASON-1, OSTM/Jason-2, Landsat, and Terra. Except for GOES, which is managed by NOAA, all missions are managed either out of NASA Goddard Space Flight Center, Greenbelt, Md. or NASA’s Jet Propulsion Laboratory, Pasadena, Calif. NASA Goddard’s GOES Project Office generates GOES images and animations.

Using all of these satellites and their instruments, NASA scientists gather data on many factors that determine if a tropical cyclone may strengthen or weaken. Data includes: storm and surface winds; sea surface heights and temperatures; rainfall intensity and area; lightning; cloud water; water vapor; cloud heights, extent of cloud cover and cloud temperature, humidity, atmospheric pressure; cloud development; and size of the storm.

NASA data currently indicate that sea surface temperatures in the tropical Atlantic are below normal. These cooler than normal ocean temperatures could “starve” developing hurricanes of their driving force, which are waters warmer than 80 degrees Fahrenheit, thus suggesting a damping of hurricanes.

Despite Atlantic waters being cooler than normal, the first tropical depression of the Atlantic season formed on May 27 around 11 a.m. EDT in the warmer waters of the Gulf Stream about 310 miles south of Providence, Rhode Island. It then moved away from the mainland U.S. and into cooler waters which led to its dissipation.

Meanwhile in the eastern Pacific, the La Niña conditions of the past few years have faded away. This is also good news for the coming hurricane season, as La Niña tends to drive the jet stream farther north, decreasing the hurricane damping wind shear over the tropics. The jet stream is a ribbon of fast moving air in the upper troposphere that guides low pressure areas (storms) and fronts.

But, it is very early to forecast hurricane activity since much can change during the summer. Will El Niño develop in the Pacific or will La Niña make a surprise return? Will the Atlantic warm up over the summer? And there are some wild cards. Since 1995, the Atlantic has entered multi-decadal conditions that favor increased hurricane activity. This loads the dice for more hurricanes.

In the Pacific, the Pacific Decadal Oscillation’s (PDO) characteristic warm “horseshoe” and cool wedge pattern is still strong in the sea surface temperature and sea-level height images. The PDO is a long-term ocean temperature fluctuation of the Pacific Ocean that waxes and wanes approximately every 10 to 20 years.

Most recent NASA sea-surface temperature and height data clearly illustrate the persistence of this basin-wide pattern. “While this PDO pattern tends to make the formation of a new El Niño event less likely, the warm waters in the western Pacific favor a very active western Pacific typhoon (“hurricane” in the eastern Pacific and Atlantic) season and inhibit the hurricane damping condition over the Atlantic and Caribbean,” said Dr. William Patzert of NASA’s Jet Propulsion Laboratory in Pasadena, Calif.

Patzert sees merit in the cautionary Atlantic hurricane outlook released by NOAA’s Climate Prediction Center in May (http://www.cpc.noaa.gov/products/outlooks/hurricane2009/May/hurricane.shtml ). “It is the beginning of a long summer and oceanic and atmospheric conditions can change dramatically,” Patzert said. Statistics and probabilities of today have huge wiggle room.

By fall, today’s conditions can change. Being vigilant and preparing for a major hurricane is still the best way to prepare for any hurricane season. “Along hurricane-prone coasts and areas, be ready; you can be clobbered no matter what the expert outlook is today,” said Patzert.

Whenever and wherever a tropical cyclone forms, NASA satellite data will provide data that will help forecasters get a better idea of how it’s going to behave.

For more information and daily storm updates from around the world, visit: NASA’s Hurricane/Tropical Cyclone Page: