Astronomers Spy on Galaxies in the Raw

A CSIRO radio telescope has detected the raw material for making the first stars in galaxies that formed when the Universe was just three billion years old — less than a quarter of its current age. This opens the way to studying how these early galaxies make their first stars.
The telescope is CSIRO’s Australia Telescope Compact Array telescope near Narrabri, NSW. “It one of very few telescopes in the world that can do such difficult work, because it is both extremely sensitive and can receive radio waves of the right wavelengths,” says CSIRO astronomer Professor Ron Ekers.

The raw material for making stars is cold molecular hydrogen gas, H2. It can’t be detected directly but its presence is revealed by a ‘tracer’ gas, carbon monoxide (CO), which emits radio waves.

In one project, astronomer Dr Bjorn Emonts (CSIRO Astronomy and Space Science) and his colleagues used the Compact Array to study a massive, distant conglomerate of star-forming ‘clumps’ or ‘proto-galaxies’ that are in the process of coming together as a single massive galaxy. This structure, called the Spiderweb, lies more than ten thousand million
light-years away [at a redshift of 2.16]. 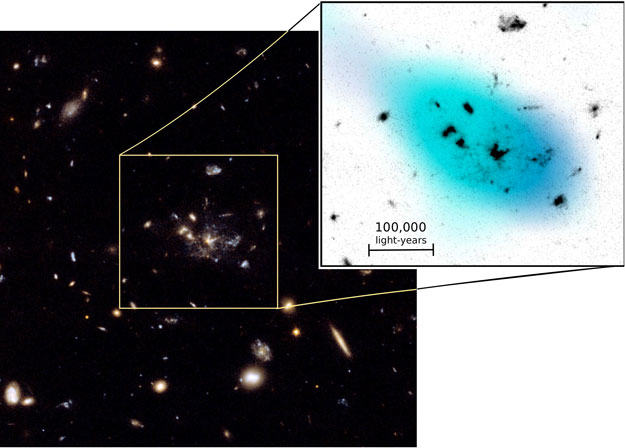 In blue, the carbon monoxide gas detected in and around the Spiderweb. Credit: B. Emonts et al (CSIRO/ATCA).

Dr Emonts’ team found that the Spiderweb contains at least sixty thousand million [6 x 1010] times the mass of the Sun in molecular hydrogen gas, spread over a distance of almost a quarter of a million light-years. This must be the fuel for the star-formation that has been seen across the Spiderweb. “Indeed, it is enough to keep stars forming for at least another 40 million years,” says Emonts.

In a second set of studies, Dr Manuel Aravena (European Southern Observatory) and colleagues measured CO, and therefore H2, in two very distant galaxies [at a redshift of 2.7]. 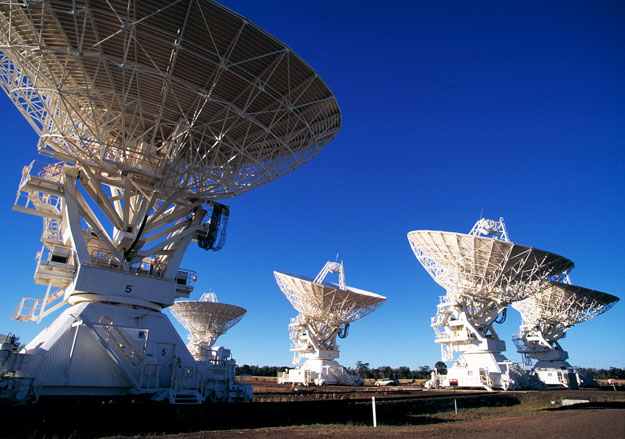 The faint radio waves from these galaxies were amplified by the gravitational fields of other galaxies — ones that lie between us and the distant galaxies. This process, called gravitational lensing, “acts like a magnifying lens and allows us to see even more distant objects than the Spiderweb,” says Dr Aravena.

Dr Aravena’s team was able to measure the amount of H2 in both galaxies they studied.
For one (called SPT-S 053816-5030.8), they could also use the radio emission to make an estimate of how rapidly the galaxy is forming stars — an estimate independent of the other ways astronomers measure this rate.

The Compact Array’s ability to detect CO is due to an upgrade that has boosted its bandwidth — the amount of radio spectrum it can see at any one time — sixteen-fold [from 256 MHz to 4 GHz], and made it far more sensitive.

“The Compact Array complements the new ALMA telescope in Chile, which looks for the higher-frequency transitions of CO,” says Ron Ekers.