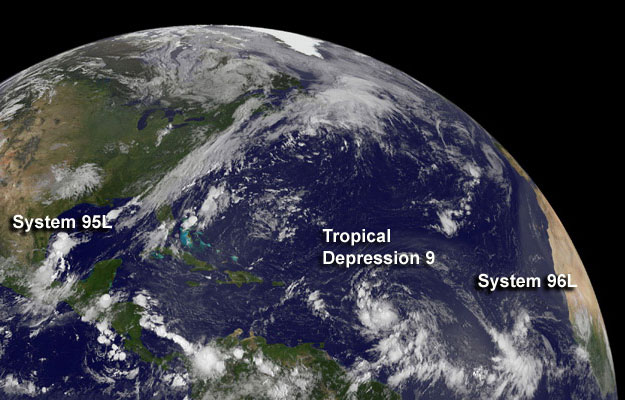 This NOAA GOES-13 satellite image taken on Aug. 21 at 7:45 a.m. EDT shows three of the four tropical systems being watched in the Atlantic Ocean basin. From left to right are: System 95L, Tropical Depression 9 and System 96L. Post-tropical Storm Gordon is just beyond the horizon.

This NOAA GOES-13 satellite image taken on Aug. 21 at 7:45 a.m. EDT shows three of the four tropical systems being watched in the Atlantic Ocean basin. From left to right are: System 95L, Tropical Depression 9 and System 96L. Post-tropical Storm Gordon is just beyond the horizon.

The Atlantic Ocean is kicking into high gear with low pressure areas that have a chance at becoming tropical depressions, storms and hurricanes. Satellite imagery from NASA’s Terra and Aqua satellites have provided visible, infrared and microwave data on four low pressure areas. In addition, NASA’s GOES Project has been producing imagery of all systems using NOAA’s GOES-13 satellite to see post-Tropical Storm Gordon, Tropical Depression 9, and Systems 95L and 96L.

Tropical Storm Gordon is no longer a tropical storm and is fizzling out east of the Azores. Tropical Depression 9 was born on Aug. 20 and continues to get organized. Behind Tropical Depression 9 in the eastern Atlantic is another low pressure area called System 96L. In the Gulf of Mexico lies another low, called System 95L. In an image taken from NOAA’s GOES-13 satellite on Aug. 21 at 7:45 a.m. EDT, all of the systems were visible except for post-tropical Storm Gordon. The storms are seen lined up along the Atlantic basin from left to right with System 95L in the Gulf of Mexico, Tropical Depression 9 just east of the Caribbean Sea and System 96L in the eastern Atlantic Ocean.

On Aug. 20 at 0435 UTC (12:35 a.m. EDT) before System 94L organized into Tropical Storm 9, NASA’s Aqua satellite passed overhead, and the Atmospheric Infrared Sounder (AIRS) instrument captured an infrared image of the storm. It showed that the strongest convection (rising air that forms the thunderstorms that make up the tropical cyclone) were located south of the center of circulation. Those thunderstorms had cold cloud top temperatures of -63 Fahrenheit (-52 Celsius) that indicated there was strong uplift in the low pressure area, and were an indication that the system could strengthen, which it did later into a depression.

Tropical Depression 9 has been the cause for tropical storm warning posts in a number of islands. On Aug. 21, a Tropical Storm Warning is in effect for Dominica, Guadeloupe, Desirade, Les Saintes, Marie Galante, and St. Martin.

TD9 appears as a rounded storm on the GOES-13 satellite image from Aug. 21. In the image, low pressure area “System 96L” trails to the southwest of TD9.

On Aug. 21 at 8 a.m. EDT (1200 UTC) Tropical Depression 9 (TD9) had maximum sustained winds near 35 mph (55 kmh) and is expected to strengthen into a tropical storm later today. It was located about 645 miles (1,035 km) east of Guadeloupe near latitude 15.1 north and longitude 51.8 west. TD90 is moving toward the west near 20 mph (32 kmh) and is expected to continue moving in that direction for the next couple of days, according to the National Hurricane Center (NHC).

NHC said that the cyclone should move through the central Lesser Antilles on Wed., Aug. 22 and move into the Caribbean Sea the next day. NHC expects rainfall between 4 and 8 inches to affect the northern Windward and the Leeward Islands, accompanied by heavy surf and rip tides.

System 96L appears well-defined on the GOES-13 satellite imagery. It is associated with a tropical wave, and is spinning about 425 miles southwest of the Cape Verde Islands. The NHC said that System 96L could very well become the tenth tropical depression of the Atlantic Hurricane Season in the next day or two. It is moving to the west at 15 mph.

System 95L Struggles in the Gulf of Mexico

The eastern-most low pressure area in the Atlantic Ocean basin is System 95L, located in the western Gulf of Mexico. It is producing disorganized showers and thunderstorms just off-shore of the northeastern coast of Mexico. The low-level center of circulation is also elongated, which is a bad sign for a tropical cyclone trying to organize. Tropical cyclones need a strong, rounded circulation to strengthen. The NHC noted that slow development is still possible before System 95L moves inland in northeastern Mexico later in the day on Wed. Aug 21. The system has a 30 percent chance of developing before that happens. Once inland, its chances for development are greatly reduced because it will be cut off from its life-giving warm water supply.

The National Hurricane Center issued their final advisory on Gordon on August 20 at 5 p.m. EDT (2100 UTC). At that time, Gordon still had maximum sustained winds near 45 mph (75 kmh) and was weakening. Gordon was about 370 miles (595 km) east-northeast of the Azores, near latitude 39.2 north and longitude 20.3 west. Gordon was moving east-northeast near 16 mph (26 kmh) and was expected to turn southeast while weakening further. Gordon is expected to dissipate in a couple of days east of Portugal.

To see an image of Tropical Storm Gordon captured by the Moderate Resolution Imaging Spectroradiometer instrument onboard NASA’s Terra satellite on Aug. 20 at 8:20 a.m. EDT, before it transitioned into a post-tropical storm, visit: http://lance-modis.eosdis.nasa.gov/cgi-bin/imagery/single.cgi?image=Gordon.A2012233.1220.2km.jpg