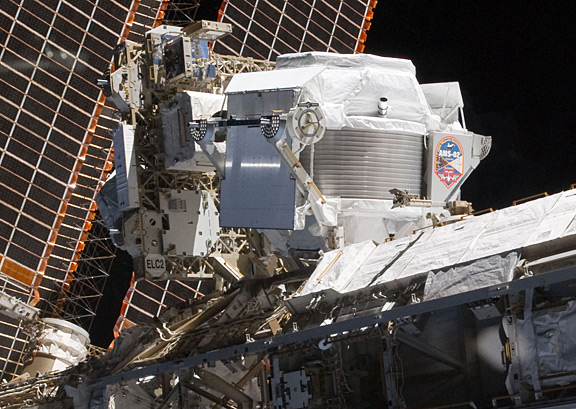 S134-E-007532 (20 May 2011) — The starboard truss of the International Space Station is featured in this image photographed by an STS-134 crew member while space shuttle Endeavour remains docked with the station. The newly-installed Alpha Magnetic Spectrometer-2 (AMS) is visible at center left. The blackness of space and Earth’s horizon provide the backdrop for the scene. Photo credit: NASA S134-E-007532 (20 May 2011) — high res (1.7 M) low res (123 K)

S134-E-007532 (20 May 2011) — The starboard truss of the International Space Station is featured in this image photographed by an STS-134 crew member while space shuttle Endeavour remains docked with the station. The newly-installed Alpha Magnetic Spectrometer-2 (AMS) is visible at center left. The blackness of space and Earth’s horizon provide the backdrop for the scene. Photo credit: NASA S134-E-007532 (20 May 2011) — high res (1.7 M) low res (123 K)

The largest and most complex scientific instrument yet to be fitted to the International Space Station was installed today. Taken into space by the Space Shuttle, the Alpha Magnetic Spectrometer will sift ten thousand cosmic-ray hits every minute, looking for nature’s best-kept particle secrets.

Cosmic rays are high-energy particles that shoot through space close to the speed of light. The newly installed Alpha Magnetic Spectrometer (AMS-02) will detect and catalogue these rays looking for new clues into the fundamental nature of matter.

One of the biggest mysteries that AMS will attempt to solve is where the cosmic rays originate. The fearsome energies of the particles could be generated in the tangled magnetic fields of exploded stars, or perhaps in the hearts of active galaxies, or maybe in places as yet unseen by astronomers.
By collecting and measuring vast numbers of cosmic rays and their energies, particle physicists hope to understand more about how and where they are born.

AMS-02 is the culmination of a programme that launched a prototype detector aboard the Space Shuttle in 1998. Known as AMS-01, the experiment showed the great potential for discovery.

AMS-02 will operate on the International Space Station to 2020 and beyond. Part of its mission is to search for antimatter within the cosmic rays. A European satellite package – Payload for Antimatter Matter Exploration and Light-Nuclei Astrophysics (PAMELA) – has already shown that there is more antimatter in space than conventional astrophysics expects.

One possibility that AMS-02 will investigate is whether it is coming from collisions between particles of ‘dark matter’. This is the mysterious substance that astronomers believe may pervade the Universe, outweighing normal matter by about ten to one.

There is also the remote chance that AMS-02 will detect a particle of anti-helium, left over from the Big Bang itself.

“The most exciting objective of AMS is to probe the unknown; to search for phenomena which exist in nature that we have not yet imagined nor had the tools to discover,” says Nobel Prize Laureate Samuel Ting, who leads the international project.

Significant European participation has gone into the AMS collaboration. The instrument is a unique suite of different detectors and was mostly built in Europe by institutes in Italy, France, Germany, Spain, Portugal and Switzerland, together with the participation of US, China, Russia and Taiwan.
In all, the experiment’s team consists of more than 600 scientists from 56 institutes in 16 countries, with the European involvement coordinated by Prof. Roberto Battiston.

The installation of AMS-02 is part of the ‘DAMA’ (dark matter) mission of ESA astronaut Roberto Vittori, one of the six astronauts on Space Shuttle Endeavour.

ESA’s new Vega small launcher has taken the next step towards its maiden flight later this year with completion of mechanical testing of a full-scale mock-up at Europe’s Spaceport in French Guiana in April.

One particular test showed that the vehicle and the pad structure can withstand high winds during the hours before launch.

Other important work included ventilation and thermal testing, inertial platform alignment and performance testing, and umbilical tests. During thermal testing, the temperature of the vehicle, in particular the fairing and avionics, was monitored.

These tests were performed during daytime and night time to cover both launch situations.

A dry-run of the final countdown tested launch operations and the rollout of the mobile gantry.

In the coming months, the Flight Readiness Review will give the final green light for the maiden qualification flight, in the second half of 2011.