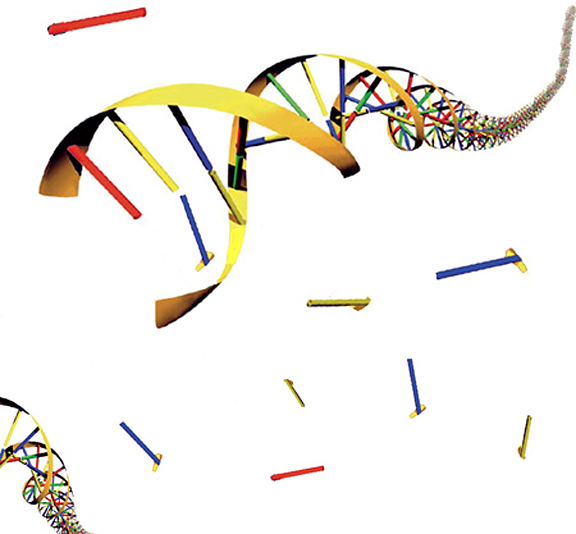 A team of Scripps Research scientists has created a new analog to DNA that assembles and disassembles itself without the need for enzymes. Because the new system comprises components that might reasonably be expected in a primordial world, the new chemical system could answer questions about how life could emerge.

A team of Scripps Research scientists has created a new analog to DNA that assembles and disassembles itself without the need for enzymes. Because the new system comprises components that might reasonably be expected in a primordial world, the new chemical system could answer questions about how life could emerge.

The work, reported in the June 11, 2009 issue of Science Express, an advance, online publication of the journal Science, might also be a starting point on the way to exotic new materials that repair themselves or transform in response to their environment.

Scientists are both bemused and fascinated by the question of how life could have arisen on Earth. One of the most prominent theories is that, before the emergence of DNA, the earliest forms of life used RNA to transmit their genetic codes. The late Leslie Orgel, a co-author of the new paper, first suggested this idea, known as the “RNA World.”

One of the theory’s challenges is that RNA is still so complex that many researchers believer something still simpler must have preceded it. “I have been working for years to learn what replicators and genetic systems might have come before the advent of the RNA World,” says team leader of the new research Professor Reza Ghadiri, a Scripps Research chemist.

One key focus for Ghadiri’s team has been amino acids’ potential primordial role. In 1996, the group showed for the first time that amino acid strands, or peptides, can self-replicate under enzyme-free conditions. In the current work, the Ghadiri lab extends this focus by creating another type of information system that might be capable of something akin to Darwinian evolution. “This work is a beginning step toward that goal,” says Ghadiri.

While much of the past work with DNA analogs such as PNA has focused on nucleobases already anchored to their backbone units, Ghadiri had the idea of working with simpler building blocks. If these blocks had easily reversed bonds, unlike DNA and PNA, it could avoid the need for enzymes while preserving key characteristics for encoding information. Looking back on the success of the experiments that have followed, Ghardiri says, “This is one of those things where you say to yourself, ‘Why didn’t I think of this before?'”

The resulting new system involves two main component types. The backbone units are peptides linked in a set pattern with the amino acid cysteine exposed and available to react. These peptides interact with the same nucleobases found in DNA, but each nucleobase is bound to an organic compound known as a thioester.

Thioester bonds reversibly with the cysteine on the peptides to form thioester peptide nucleic acid (tPNA). This allows the nucleobases to attach and disassemble on their own without enzymes, so that a given peptide strand will hold a shifting array of nucleobases. This process is something like soldiers walking around a field achieving a certain formation then moving into a new formation.

If an unzipped segment of DNA is added as a template to a solution with the tPNA components, the nucelobase soldiers will automatically assume a formation on peptide strands that complements the DNA according to standard Watson-Crick pairing of adenine with thymine and cytosine with guanine.

The complementary tPNA and DNA strands bond, but these pairings can then be unzipped by adding to the mix complementary DNA strands, which outcompete the tPNA for space on the initial templates. The DNA-DNA pairings remain stable, causing the tPNA components to resume their unstable shuffling until a new DNA template is added and the process begins again.

The Ghadiri team was also able to show that a strand of tPNA can act as a template, causing complementary tPNA formation and strand pairing, though they have not yet achieved self-replication for tPNA, an ultimate goal.

All of the chemical constituents of the assembled tPNA could have been found in a world before life began. “So it is tantalizing to think about the possibility of peptides and nucleic acids involved in primordial genetic systems,” says Ghadiri. However, because the tPNA can so easily disassemble, the strands do not technically transmit information, and that transmission is how DNA drives life.

To better understand the potential tPNA primordial role, the team is now exploring ways that the tPNA units might be chemically transformed so that at some point the soldiers begin locking hands after achieving a certain formation, allowing the passage of information. The group is also working to determine tPNA’s structure, which could resemble the famous DNA double helix or look altogether different.

Beyond origins of life questions, Ghadiri says the work also offers some distant but intriguing possibilities, especially considering that there are almost endless possibilities for creating systems similar to tPNA using differing chemical constituents. Such systems could lead to the formation of new enzymes or other chemicals capable of catalyzing reactions with biomedical or other uses. “The capacity to have nucleic acid-like folded structures with protein features will surely in my mind give us new functionalities,” he says, though it is impossible to say yet what those new functionalities might be.

Ghadiri also imagines some science fiction-worthy options for tPNA-related materials such as plastics that can repair themselves when fractured. Another possibility, tied to the way that tPNA rearranges when exposed to differing templates, would be to create materials that can remodel themselves by similarly responding to changes in their environment.

“You can in principle do many things, and we’re enthusiastic about the prospects,” says Ghadiri. “This is just the beginning.”

In addition to Orgel and Ghadiri, authors on the paper, entitled “Self-Assembling Sequence-Adaptive Peptide Nucleic Acids,” are Yasuvuki Ura, John Beierle, and Luke Leman, all from The Scripps Research Institute.

This work was supported in part by the Skaggs Institute for Chemical Biology, NASA Earth and Space Science Fellowship Program, and the NASA Science Mission Directorate’s Planetary Science Division. The paper is dedicated to the memory of Leslie E. Orgel.

About The Scripps Research Institute

The Scripps Research Institute is one of the world’s largest independent, non-profit biomedical research organizations, at the forefront of basic biomedical science that seeks to comprehend the most fundamental processes of life. Scripps Research is internationally recognized for its discoveries in immunology, molecular and cellular biology, chemistry, neurosciences, autoimmune, cardiovascular, and infectious diseases, and synthetic vaccine development. Established in its current configuration in 1961, it employs approximately 3,000 scientists, postdoctoral fellows, scientific and other technicians, doctoral degree graduate students, and administrative and technical support personnel. Scripps Research is headquartered in La Jolla, California. It also includes Scripps Florida, whose researchers focus on basic biomedical science, drug discovery, and technology development. Scripps Florida is located in Jupiter, Florida.