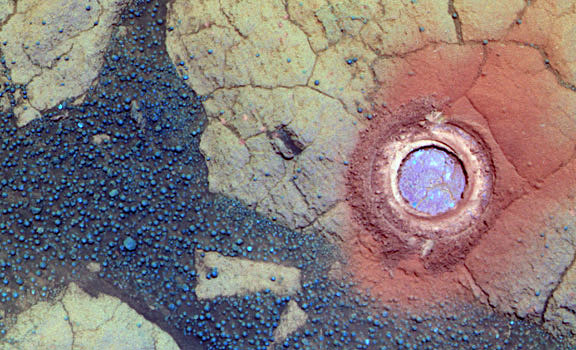 A flat, light-toned rock on Mars visited by NASA’s Mars Exploration Rover in 2005 informally bears the name of the first human in space, Yuri Gagarin, who rode into orbit in the Soviet Union’s Vostok-1 spacecraft on April 12, 1961.

The team using Opportunity to explore the Meridiani Planum region of Mars since 2004 chose “Gagarin” for what they would call the rock that the rover examined beside “Vostok” crater. A target for close-up examination on Gagarin is called “Yuri.”

To commemorate Gagarin’s flight, a color image of the rock on Mars has been posted at http://photojournal.jpl.nasa.gov/catalog/PIA13984. The image combines frames taken through three different filters by Opportunity’s panoramic camera.

Early accomplishments in the Space Age inspired many of the researchers exploring other planets robotically today, who hope their work can, in turn, help inspire the next generation.

“The 50th anniversary of mankind’s first fledgling foray into the cosmos should serve as an important reminder of the spirit of adventure and exploration that has propelled mankind throughout history,” said Mars rover science team member James Rice of NASA Goddard Space Flight Center, Greenbelt, Md. “We are a species of explorers; it is encoded into our very DNA.”

Rice continued, “Half a century ago Yuri Gagarin was lofted into a totally unknown, remote and hostile environment and in doing so opened up a new limitless frontier of possibilities for mankind. A mere 23 days later another brave human, Alan Shepard, climbed aboard a rocket and ventured into the starry abyss. Their courage and vision continue to inspire and lead us into the unknown. Hopefully, one day in the not too distant future it will lead humanity on a voyage to Mars.”

Opportunity and its twin, Spirit, completed their three-month prime missions on Mars in April 2004. Both rovers continued in years of bonus, extended missions. Both have made important discoveries about wet environments on ancient Mars that may have been favorable for supporting microbial life. Spirit has not communicated with Earth since March 2010. Opportunity remains active. This month, it has passed both the 27-kilometer and 17-mile marks in its total driving distance on Mars.

NASA’s Jet Propulsion Laboratory, a division of the California Institute of Technology in Pasadena, manages the Mars Exploration Rover Project for the NASA Science Mission Directorate, Washington. For more information about the rovers, see http://www.nasa.gov/rovers.