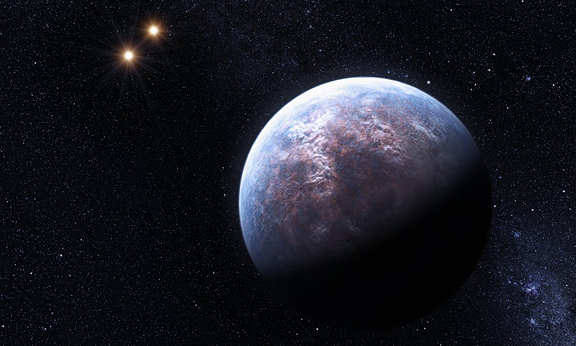 Today, at an international ESO/CAUP exoplanet conference in Porto, Portugal, the team who built the High Accuracy Radial Velocity Planet Searcher, better known as HARPS, the spectrograph for ESO’s 3.6-meter telescope, reports on the incredible discovery of some 32 new exoplanets, cementing HARPS’s position as the world’s foremost exoplanet hunter. This result also increases the number of known low-mass planets by an impressive 30%. Over the past five years HARPS has spotted more than 75 of the roughly 400 or so exoplanets now known.

Today, at an international ESO/CAUP exoplanet conference in Porto, Portugal, the team who built the High Accuracy Radial Velocity Planet Searcher, better known as HARPS, the spectrograph for ESO’s 3.6-meter telescope, reports on the incredible discovery of some 32 new exoplanets, cementing HARPS’s position as the world’s foremost exoplanet hunter. This result also increases the number of known low-mass planets by an impressive 30%. Over the past five years HARPS has spotted more than 75 of the roughly 400 or so exoplanets now known.

“HARPS is a unique, extremely high precision instrument that is ideal for discovering alien worlds,” says Stephane Udry, who made the announcement. “We have now completed our initial five-year program, which has succeeded well beyond our expectations.”

The latest batch of exoplanets announced today comprises no less than 32 new discoveries. Including these new results, data from HARPS have led to the discovery of more than 75 exoplanets in 30 different planetary systems. In particular, thanks to its amazing precision, the search for small planets, those with a mass of a few times that of the Earth — known as super-Earths and Neptune-like planets — has been given a dramatic boost. HARPS has facilitated the discovery of 24 of the 28 planets known with masses below 20 Earth masses. As with the previously detected super-Earths, most of the new low-mass candidates reside in multi-planet systems, with up to five planets per system.

In 1999, ESO launched a call for opportunities to build a high resolution, extremely precise spectrograph for the ESO 3.6-meter telescope at La Silla, Chile. Michel Mayor, from the Geneva Observatory, led a consortium to build HARPS, which was installed in 2003 and was soon able to measure the back-and-forward motions of stars by detecting small changes in a star’s radial velocity — as small as 3.5 km/hour, a steady walking pace. Such a precision is crucial for the discovery of exoplanets, and the radial velocity method, which detects small changes in the radial velocity of a star as it wobbles slightly under the gentle gravitational pull from an (unseen) exoplanet, has been most prolific method in the search for exoplanets.

In return for building the instrument, the HARPS consortium was granted 100 observing nights per year during a five-year period to carry out one of the most ambitious systematic searches for exoplanets so far implemented worldwide by repeatedly measuring the radial velocities of hundreds of stars that may harbor planetary systems.

“These observations have given astronomers a great insight into the diversity of planetary systems and help us understand how they can form,” says team member Nuno Santos.

The HARPS consortium was very careful in their selection of targets, with several sub-programs aimed at looking for planets around solar-like stars, low-mass dwarf stars, or stars with a lower metal content than the Sun. The number of exoplanets known around low-mass stars — so-called M dwarfs — has also dramatically increased, including a handful of super Earths and a few giant planets challenging planetary formation theory.

“By targeting M dwarfs and harnessing the precision of HARPS we have been able to search for exoplanets in the mass and temperature regime of super-Earths, some even close to or inside the habitable zone around the star,” says co-author Xavier Bonfils.

The team found three candidate exoplanets around stars that are metal-deficient. Such stars are thought to be less favorable for the formation of planets, which form in the metal-rich disc around the young star. However, planets up to several Jupiter masses have been found orbiting metal-deficient stars, setting an important constraint for planet formation models.

Although the first phase of the observing program is now officially concluded, the team will pursue their effort with two ESO Large Programs looking for super-Earths around solar-type stars and M dwarfs, and some new announcements are already foreseen in the coming months, based on the last five years of measurements. There is no doubt that HARPS will continue to lead the field of ground-based exoplanet discoveries, especially pushing towards the detection of Earth-type planets.

The full text of this press release, together with images and videos, (including an ESOCAST), are available on http://www.eso.org/public/outreach/press-rel/pr-2009/pr-39-09.html

This discovery was announced today at the ESO/CAUP conference “Towards Other Earths: perspectives and limitations in the ELT era”, taking place in Porto, Portugal, on 19-23 October 2009. This conference discusses the new generation of instruments and telescopes that is now being conceived and built by different teams around the world to allow the discovery of other Earths, especially for the European Extremely Large Telescope (E-ELT). The new planets are simultaneously presented by Michel Mayor at the international symposium “Heirs of Galileo: Frontiers of Astronomy” in Madrid, Spain.

This research was presented in a series of eight papers submitted — or soon to be submitted — to the Astronomy and Astrophysics journal.

The team is composed of

The web page of the conference “Towards Other Earths: perspectives and limitations in the ELT era” is at http://www.astro.up.pt/investigacao/conferencias/toe2009/