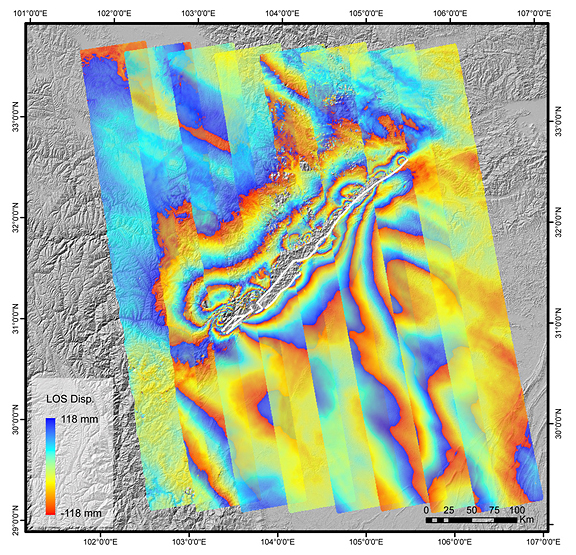 “One of the very fundamental issues for understanding an earthquake is to know how the rupture is distributed on the fault plane, which is directly related to the amount of ground shaking and the damage it could cause at the surface,” said Dr Jianbao Sun of the Institute of Geology, China Earthquake Administration (IGCEA).

Applying a technique called SAR Interferometry (InSAR) on the data, the researchers produced a set of ‘interferogram’ images covering the entire coseismic rupture region and its vicinity. This interferometric map revealed the amount and scope of surface deformation produced by the earthquake.

“This is perhaps the very first time people have seen the complete deformation field produced by an earthquake on such a large scale,” Sun said.

InSAR involves combining two or more radar images of the same ground location in such a way that very precise measurements – down to a scale of a few centimetres – can be made of any ground motion taking place between image acquisitions. Coloured interferograms usually appear as rainbow fringe patterns.

The researchers combined these SAR satellite data with GPS measurements and developed a model that shows fault geometry and rupture distribution of the Longmen Shan fault zone, a series of parallel faults that run for about 400 km from southwest to northeast in the region. The earthquake that struck on 12 May last year produced a 240-km-long rupture along the Beichuan fault and a 72-km-long rupture along part of the Pengguan fault.

Studying the model, they were able to determine that the fault plane dips considerably to the northwest in the zone’s southwest area and then rises up to a nearly vertical position in the zone’s northeast.

They also learned that the direction of the motion along the fault changed, going from a thrust where upper layer rocks were pushed up and lower layer rocks pulled down, to a ‘dextral faulting’, where two parts of Earth’s plates slide past each other. About a 7-metre slip, the greatest along the rupture, was detected on the Beichuan fault near Beichuan City, which was destroyed completely by the quake and suffered the highest number of casualties.

Another major finding was that the fault junctions (solid rock barriers that stop a quake from propagating from one segment to another), beneath the hardest-hit cities of Yingxiu, Beichuan and Nanba, failed to withstand the extraordinary energy released along the fault.

“These fault junctions are barriers, whose failures in a single event allowed the rupture to cascade through several fault segments, resulting in a major 7.9-earthquake,” Shen explained. “Earthquakes across fault segments like this are estimated to happen about every 4000 years.”

These new results were published this month in the journal Nature Geoscience, part of Nature magazine.

Following the quake, Sun and Shen worked closely with the ‘Dragon 2’ programme to coordinate SAR coverage of the seismic area. Dragon 2 is a joint undertaking between ESA and China’s Ministry of Science and Technology that encourages scientists to use satellite data to monitor and understand environmental phenomena in China.

“The resulting Envisat SAR data acquired along an important track close to the epicentre turned out to be vital in constraining the southern part of the deformation field and helping explain the fault geometry and rupture distribution of the Pengguan fault, which would be difficult to resolve otherwise,” Shen said.

The scientists also hope the data will help to assess earthquake potential in the future.

“Under the coordination of Dragon 2, the SAR data acquired during this period will be used, along with GPS measurements, to reveal geophysical processes within the Longmen Shan fault zone and the lower crust and upper mantle, which will help us understand the earthquake and faulting mechanisms and hopefully shed light on future seismic risks in this area.”