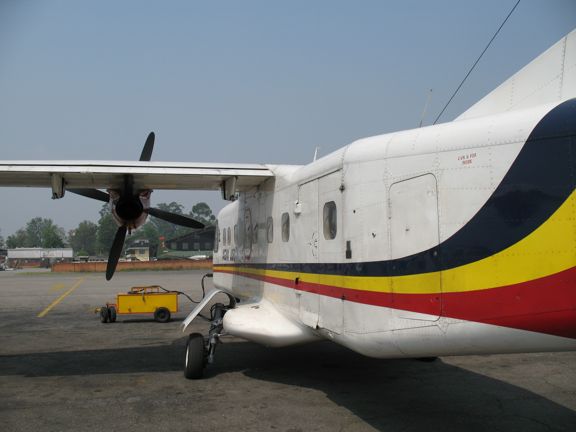 My ride to Lukla

Today I head for Lukla and then trek to Padking. A long day lies before me.

I got an early start this morning. Having gone to bed a little early (still on U.S. time somewhat) I had plenty of time to do final packing. With all my bags downstairs I inhaled a box breakfast and found myself in a taxi at 5:10 am. The driver was the same guy who had picked me up at the airport several days ago. They have a team, it would seem, one that covers the entire spectrum of what it takes to get clients where they need to go – reliably. Or, at least as reliably as is possible in Nepal.

My ride to Lukla

Today I head for Lukla and then trek to Padking. A long day lies before me.

I got an early start this morning. Having gone to bed a little early (still on U.S. time somewhat) I had plenty of time to do final packing. With all my bags downstairs I inhaled a box breakfast and found myself in a taxi at 5:10 am. The driver was the same guy who had picked me up at the airport several days ago. They have a team, it would seem, one that covers the entire spectrum of what it takes to get clients where they need to go – reliably. Or, at least as reliably as is possible in Nepal.

Arriving at the airport I was once again tossed into seeming pandemonium. Hundreds of foreigners (and a few locals) waiting to hop a small plane to elsewhere. I asked they guys who brought me here if this happens every day. One of them smiled and said “yes”.

I was scheduled to fly to Lukla on Agni Air flight #301 departing at 6:30 am. Short flight – less than an hour. My bags were tossed on an industrial sized scale but no one looked at the weight. They were then tossed into a pile and dragged out back (presumably) to the cargo hold of my plane.

I then cooled my heels in an empty lounge. That emptiness lasted for about 10 minutes. All too soon the place was swarming with people. Several TV sets were on blasting words and music that meant nothing to me other than to remind me that I was not in Kansas any more.

Eventually the flights were announced. There is a monitor that lists them but the computer that runs it seems to crash a lot. The process is as follows. Someone from the airport stands in front of the gate and yell the airline name and destination. Sometimes they include the flight number. Sometimes to or more people yell different flights at the same time. To add to the cacophony someone started to talk over the PA system.

My flight was one of the first. I heard the words that I needed to hear and moved toward thegate. After being patted down by the local version of the TSA (separated by gender) were walked to a bus that took us to the plane, a De Havilland.

The passenger mix was eclectic. One American (me) several Brits, three Slovenian women, a Spanish guy and his Nepali daughter, several canadians and others further toward the back of the plane that I could not identify. The flight attendant handed out cotton (for ear plugs) and candy. And then we sat. Suddenly we taxied out as if to prepare to take off and then quickly returned to the flight line. A while later we learned that weather was bad in Lukla and that clouds at 4,000 meters needed to be at 5,000 meters at landing time for us to get an OK.

More waiting – and then the order to deplane and head back to the terminal. No idea when we’d take off. The flight monitor listed us as “departed”. Over the course of the next three hours Andy, a Brit, and one of the Slovenian women and I established an ad hoc watch network to see if we could find out what was going on. This was starting to turn out like an episode of “Lost”.

At one point a man I never met before came up to me and informed me that he worked with IMG (International Mountain Guides), that he had informed the folks in Lukla that I was delayed and that they were waiting for me. He came back several times to check in with me. Like I said, IMG has a local network that looks out for its customers. Now I understand one of the reasons they wanted a good photo of me.

Around noon we heard the magic words. The Slovenian gals, Andy, myself and the rest of our passenger team rushed to the gate and onto the plane. This time we were airborne within minutes. The air around Kathmandu is very smoggy from wood fires and motor vehicles – and it sits in a valley. So it took a while to get away form that. When we did, to our left, the Himalayas leapt into the sky. Ouch. Big mountains. BIG mountains. 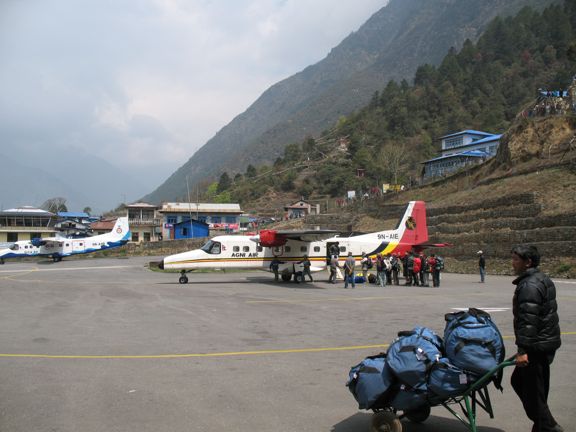 Tashi checks out our porters

After half an hour, as I was aiming my camera (in video mode) at some close scenery below, I heard familiar noises – the kind a STOL aircraft makes when it is turing to make a landing on a small airstrip. I have been through half a dozen Twin Otter (another STOL aircraft) landings on Devon Island and Resolute Bay on dusty short airstrips – so I thought I was prepared for this. Not a chance. The Lukla airstrip is inclined uphill – kind of like an aircraft carrier caught freeze frame atop a large wave and then moved to the mountains in that same orientation. We landed with a thump and suddenly decelerated. We swung of the strip and were walking off the plane in less than 3 minutes. Welcome to Lukla! 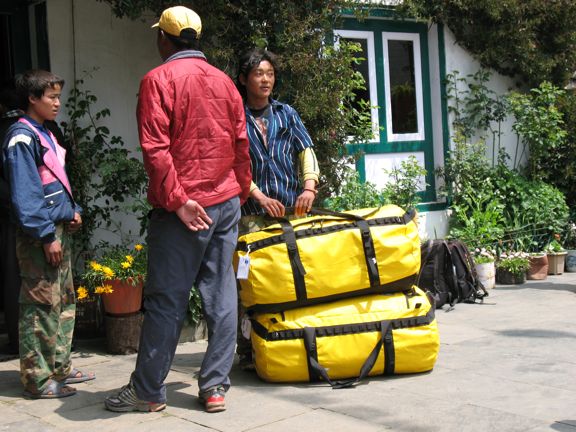 Small village along the way

I was greeted by one IMG person who told me that my sherpa would be here in a few minutes. Many of the people in this part of Nepal are my height (5’7″). Most are shorter. A crowd of local men pushed against a fence hoping to get lucrative porter jobs. A soldier opened the gate and a man in a yellow baseball cap a full head taller than the others, perhaps 5’9″ pushed through. And so I met Tashi Tshering Sherpa.

Tashi has a broad smiling face the color of walnut wood, a strong grip, and as I would soon learn, a humble, selfless confidence of the sort some might mistake for shyness. I had already learned a little about Tashi – he has summited Everest 11 times as well as many other peaks. When IMG told me that I’d have a “sherpa guide” I had imagined that it would be someone who was wise in the way of guiding flat landers like me to great heights. 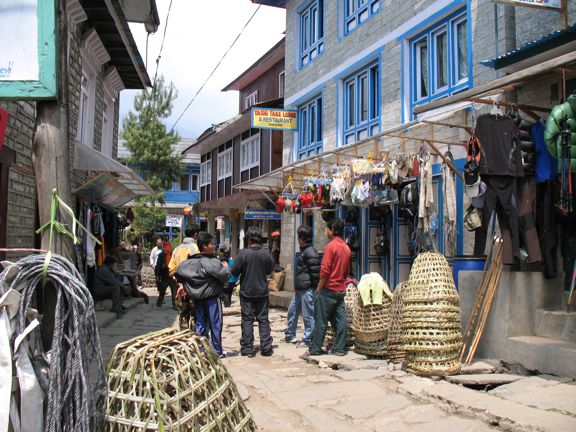 I had not imagined that I’d get someone of this amazing caliber as my sherpa guide – to say nothing of his personality. Factor this land trek with Tashi to meet up with my friend, an astronaut, who was about to try for the summit himself and, well, I have am embarrassment of riches in terms to think and write about.

Tashi picked out two guys to be porters for the trip up to Everest Base Camp. They tried out my two 30 kilo duffels, nodded, and the deal was made. IMG limits the weight of duffels as do many other guiding companies. However the local economy pushes the envelope well beyond 30 kilos. 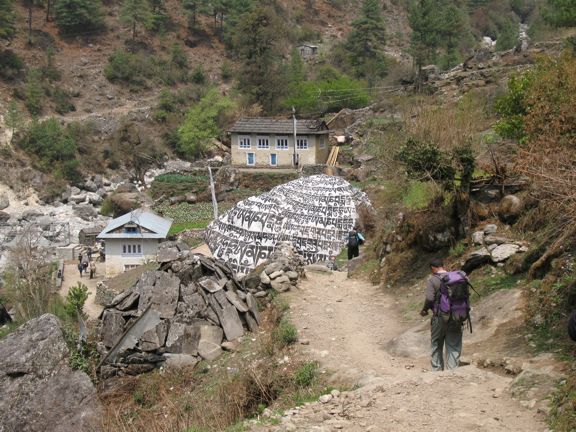 Porters and their loads

Again, all of the men (and women, boys, and girls) are my height – usually shorter. Yet their loads tower over them on bamboo racks. These racks are also attached to a sling which goes around the forehead of the porter. Most porters use a Y-shaped stick either as a trekking pole or, at rest time, to sit on. 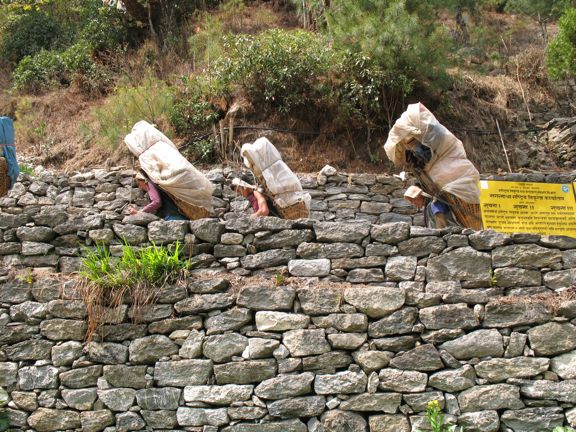 If you look closely at their loads you see cases of beer, a dozen bags of sugar or flower, and many other things that are not exactly light. When I asked Tashi what the heaviest loads are he said (“as much as 120 kilos”). That’s 264 pounds. Yet I have no doubt that it is true after seeing what these folks carry. If you have ever wondered why the British so valued their Gurka regiments, or why it is sherpas who hold multiple Everest summit records, it has to do with the innate strength of these people. 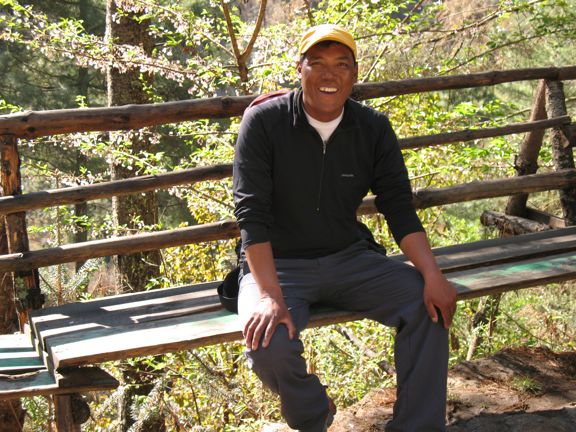 Tashi and I were both eager to get going to make up for lost time. We struck out less than an hour after I arrived. As we left, we exited through a open ended structure called a kani. Inside are prayer wheels which you must spin. That blessing under my belt we headed out. Within minutes the whole range of trail denizens made their appearance, noisy foreigners (mostly American), human porters heading in both directions, and yak/cow hybrids also carrying things. 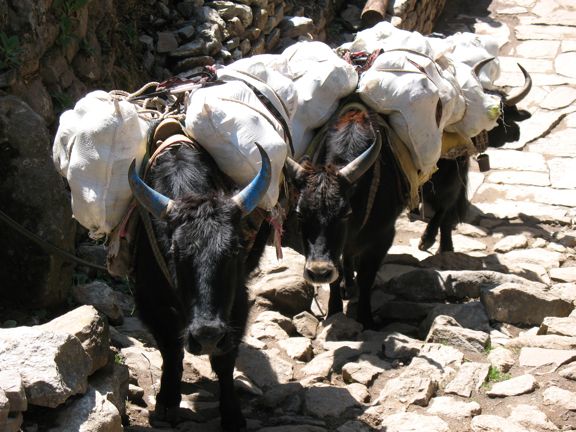 We had lunch at Ghat, a small village near a bridge crossing a small river and then pressed on to Phakding where we stayed for the night at a tea lodge. Depending on what you spend you can get a private room (what I had) or share a room. The menus for these teal lodges are uniform – rice, local attempts to re-create pizza and macaroni and cheese, Everest beer, Coca Cola, Orange Fanta and San Miguel beer.

I am still transitioning from Eastern US time to local Nepali time so I went to bed as soon as the sun set. The trek today had some hard parts, but training, Diamox (for altitude acclimatization) and persistence got me through. While I could have pushed myself to go faster (as some folks did) I am using this trek as a means of physiological adaptation and acclimatization such that when I arrive at Everest I will be able to function – productively – for a month. The vast majority of trekkers have end points far lower. And those trekkers that are aiming for Everest will only do a ‘touch and go’ there with an afternoon departure from Base Camp on the same day of arrival.