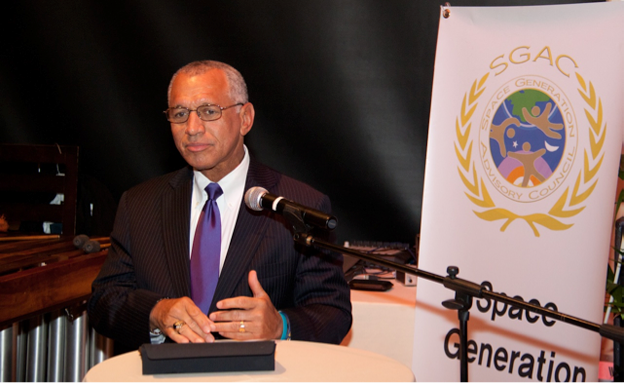 The Space Generation Congress (SGC), organized by the Space Generation Advisory Council (SGAC), held its 10th annual event for the first time in the continent of Africa. SGC 2011 was held from September 29 to October 1, 2011, just prior to the International Astronautical Congress (IAC) in Cape Town, South Africa. Celebrating its 10th anniversary, SGAC organized and executed their biggest event since their foundation at UNISPACE III. With a 30% increase in the number of delegates since last year, SGC 2011 brought together 130 students and young professionals from 42 countries and six continents.

Reflecting on the high records achieved at SGC 2011, SGAC Chair Michael Brett stated, “We […] are excited about the number and quality of our delegates, speakers and supporters”. Among the top space leaders who addressed the Space Generation were:

During the three-day conference and workshop, delegates discussed challenges in the space sector that are prevalent today. These were discussed in five working groups: Industry, Agency, Society, Exploration, and Outreach. At the end of Day 3, on October 1, each group gave a presentation summarizing their findings and analysis, encapsulating their fresh perspectives and innovative recommendations for these issues:

The SGC 2011 Industry Project Group debated on “The Political and Technological Challenges of Space Debris and Its Mitigation.” Their recommendations focused on three areas: space situational awareness, better and internationally-adopted debris mitigation guidelines and, finally, the more challenging topic of active debris removal.

The SGC 2011 Agency Project Group, which dealt with “Radio Frequency Spectra and Satellites: The Technological, Logistical and Political Implications of Regulation,” looked at the interference of essential services, taking into account competing socio-economic needs and at public versus commercial uses of spectrum bands. The recommendations were connected with the assessment of emerging capabilities based on experience, the standardization of emergency services, applications for safety of life and methods to decrease unintentional upward radiation.

The SGC 2011 Society Project Group, whose focus was “Integrating Space Technology into Society: Overcoming Societal, Political, Economic, and Logistical Roadblocks” based their discussion on the UN Millennium Development goals and identified that lack of awareness is one of the biggest barriers that prevents space technologies to penetrate society. Their recommendations included continuing investment in R&D and sharing results with international bodies interested in identifying world problems, involving specialists in communication and outreach from outside the space community, and coordinating the development of standard training curricula, best practices dialogue and technology development agenda.

The SGC 2011 Exploration Project Group, which looked into “Robotic Exploration in Today’s Evolving Global Space Sector” chose two destinations, Near Earth Objects and Europa, and identified ways in which robotic and human exploration can work together with the support of international collaboration. They also pointed out that robotic missions can take greater risks when venturing into space. Finally, the group also looked at outreach initiatives that could make robotic exploration as exciting as human missions.

The SGC 2011 Outreach Project Group, whose challenge was to debate on “Space for Developing Regions: The African Case Study” concluded that investing in space technology applications is more beneficial than spending resources on terrestrial applications. For example, in terms of telecommunication, space applications could help in distance education, whereas satellite observations are cost-effective in mapping.

These perspectives of the next generation of space leaders will be gathered into a final report during the next couple of months, and will be presented to the United Nations Committee on the Peaceful Uses of Outer Space and to industry, agency, and academic organizations that collaborate with SGAC.

The Space Generation Congress 2011 concluded on Saturday, October 1, with a memorable gala dinner, featuring, for the second time at SGC, NASA Administrator, Charles F. Bolden. He addressed the Space Generation with an inspiring speech. Bolden reflected on the ideas that were presented by SGC delegates earlier that day and said, “It is exciting to listen to you, the next generation”. Bolden also shared NASA’s past, present, and future plans, including Mars missions, and the exciting fact that the next generation of space leaders will be part of those milestones and achievements. He reminded the audience that when we talk about space, we talk about HOW to explore, not the question of whether we do it. He also emphasized the importance of providing societal benefits when developing and promoting space technologies and applications.

A record number of 32 SGAC Young Leader Scholarships we awarded. These were funded by SGAC and its partners. Many of the scholarship winners were from developing nations, making it a truly international youth space forum.

SGAC looks forward to welcoming another congregation of bright, future international space sector leaders. “SGAC is currently in its best moments ever. Heads of Space Agencies all over the world have recognized the necessity and benefits of associations like SGAC for the space sector. I am hopeful that SGC 2012 in Naples will be fruitful for the growth of Space Generation”, said Andrea Jaime Albalat, SGAC’s new Deputy Executive Director. Next year’s 11th annual Space Generation Congress will be held in Naples, Italy, from September 27 to 29, 2012.