The Prospect of a Commercial Mir: Are we going to have TWO space stations? 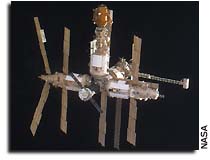 News and observations by Keith Cowing, Editor of NASA Watch.

[13 Jan 2000] Russia is currently involved in serious behind the scenes efforts designed to not only prolong Mir’s life, but to transform it into a commercial venture. This is in stark contrast to earlier official pronouncements made by Russia over the past year or so that it intended to deorbit Mir and focus its limited resources on the International Space Station program. While publicly professing that what Russia does with its space station is its (Russia’s) business, NASA is privately very concerned about this change in tactics.

It would seem that the current commercial ventures being funded by Gold & Appel, a venture capital firm, and by the nascent Mir Corp. LTD , an off-shore (Bermuda-based) commercial venture being formed to operate on Mir, pose a threat to the supply of Soyuz and Progress vehicles for the ISS program. Russia is providing much of its contribution to the ISS program using its own resources to provide its contribution. Since finances are sparse, Russia has not been at all shy about reselling portions of its ISS allocation or requesting substantial financial assistance from the US to help it meet its obligations.

Now Russia is faced with trying to run a production line with a limited capacity to meet both the needs of ISS and a revitalized Mir program. While the US is under the impression that previous financial assistance to Russia will result in specific Soyuz and Progress vehicles for ISS use, it would seem that a commercial Mir program is also eyeing some or all of these very same spacecraft. It is clear that hard cash speaks with a very loud voice – one that competes with the obligations Russia has to all of the ISS partners.

A meeting was held on 12 January 2000 in Russia to consider what to do with Mir. Energiya, Khrunichev, and other corporations and agencies concerned with Mir were in attendance. The outcome of the meeting was a series of recommendations that are to be presented to senior Russian government officials. Yuri Koptev (RASA) and Yuri Semenov (Energiya) will jointly author a proposal to the government, one that requires formal approval from the government before they can proceed.

The key points of this proposal are as follows: There will be a Progress mission to Mir on 31 January 2000. The Progress will carry logistics (atmosphere replenishment) and fuel to perform a reboost. If the Progress docks successfully, then a Soyuz mission will be sent to Mir toward the end of March 2000 for a 45 day mission. If, for some reason, that Progress can’t dock or perform its mission, Russia will send a Soyuz crew up some time in early February to facilitate a manual docking between Mir and the Progress.

The question as to how to pay for this mission arose at the 12 January meeting. Energiya has apparently been given the go-ahead to solicit financial (commercial) support from outside Russia (if need be) so as to support the continuation of Mir operations. This has resulted in the transfer of $7 million to Energiya from Gold & Appel. The total amount to be transferred at this point is rumored to be slightly more than $20 million. Energiya will be allowed to operate Mir if it is able to generate enough funds to fully operate Mir.

Various estimates have been floated as to what this cost. A year or so ago, Russia publicly told the press that this figure was approximately $250 million per year. They have since told investors that the real number is closer to $100 million per year.

Clearly, regardless of what number you accept as being valid, much more money needs to be forthcoming from Gold & Appell and Mir Corp. LTD if Mir is to be operated on a long term basis. According to published reports and NASA Watch sources, it is the intent of Mir Corp to sell visits to Mir for upwards of $30 to $50 million. There are also commercial endorsements, advertising, and research opportunities being circulated as part of the overall portfolio to be offered aboard Mir. Should the venture become popular, there is also talk of refitting portions of Mir – and even expanding it.

The dilemma facing NASA is a curious one. On one hand, it speaks of the commercialization opportunities for the International Space Station with new-found fervor – to the point of shoving in legislation at the last moment into the FY 2000 Appropriations Conference report that would allow it to engage more aggressively in commercial ventures. The TransHab concept being promoted by commercialization guru Dan Tam is the most notable of NASA’s attempts to act in an entrepreneurial mode.

Recently, NASA received a shot in the arm when the National Research Council more or less endorsed a NASA concept wherein management of the basic research and commercial aspects of the US portion of ISS would be transfered to a Non-Governmental Organization (NGO). Private sector and Congressional interests have already expressed enthusaism for this concept.

Then there is the actual private sector (the real entrepreneurs) whose views of space commercialization are often at odds with those held by NASA. One deal being proposed by Spacehab and Energiya aboard ISS actually circumvents NASA altogether and includes the Russian Space Agency as a silent partner. The other notable project (Mir Corp. Ltd.) has generated outright hostility among a number of NASA officials – many of whom fear that it will distract Russia from meeting its ISS obligations.

In some ways NASA is right on track regarding space commercialization. In other ways, NASA seems to have missed the train.

It is rather curious that the most significant private investments of capital to date in the commercial utilization of a space station are being made aboard Mir, a space station originally built by a communist nation. Moreover, while the US seems to be distracted and pulled in several different directions at once, all of the significant deals (either on ISS or on Mir) are happening with the full support of the Russian government – a country where capitalism was illegal little more than a decade ago.

It all comes down to this – the Russian government sees space commercialization as a necessity. The US still views it as a luxury. Until such time as the US is clear in its intent to facilitate the commercialization of space, it risks being left in the dust – and having someone else make the rules by default.

Russia has a head start: they have a functional space station. We don’t.

° NASA’s Dan Tam does too good of a sales job – and places ISS science at risk, SpaceRef