WASHINGTON – Spacehab’s project to develop a commercial module (“Enterprise”) for the International Space Station has undergone a significant change – within its scope and launch mode. Once planned for launch on a Russian Proton rocket, a senior Spacehab manager now says that it will launch Enterprise on a Space Shuttle.

The Enterprise project has yet to sign up even one commercial user for any of its proposed on orbit stowage or crew habitation services. Moreover, NASA, their prime customer, isn’t exactly flush with funds right now.

Last Thursday, John M. ‘Mike’ Lounge, Senior Vice-President, Space Engineering Services at the Houston-based company, said that the shift to a Space Shuttle for launching services was made possible because of a reduction in the size of the Russian Science Power Platform (SPP). The SPP will now provide only 25 kW of power for the ISS instead of the originally planned 50 kW. This results in a smaller piece of hardware – thus a reduction in mass. This size reduction, along with the deletion of a docking module, would free up some upmass within the SPP’s original allocation aboard its own Shuttle mission. With the repackaging of the SPP, the Enterprise module, the docking module, and a vertical cargo carrier holding the stripped-down power unit, both the SPP and Enterprise would all fit into a single Shuttle payload bay.

Originally, the SPP had been manifested for mission ISS 9A.1/STS-116 in October 2002. NASA now shows the delivery of this hardware in April 2004. Russia has had continuing problems rounding up the funds for the SPP. Part of Enterprise partner RSC-Energia’s contribution to the project is launch services. Energia also provides various services in support of the SPP. Now it would seem that Russia has decided to reduce the SPP’s capabilities and re-sell some of the Space Shuttle cargo capacity to the Enterprise project in order to meet this portion of their ISS commitments.

“This will require us to do some modification” of the module’s design, to make it compatible with the orbiter’s safety and remote manipulation system grappling”, Lounge said. Enterprise had been previously planned for a flight aboard an expendable launch vehicle such as Proton, which would subject the module to different types of launch stresses than those imparted during a Shuttle flight. Omitted from the project now would be a maneuverable upper stage that would have carried the Enterprise to the station, where station robotics would have docked the unit. That function would now be performed by the Shuttle.

Lounge said that Spacehab and its investors had spent between $10 and $20 million thus far on the Enterprise project, which is intended as a commercially-supported augmentation module that would attach to the ISS in the location originally intended for the Russian-provided Docking and Stowage Module (DSM). With an agreement in place with Russia, Enterprise would now perform at least some of that original stowage function. The DSM was originally scheduled for delivery on mission ISS-9R in April 2004. NASA’s websites now show that launch date as “TBD.” 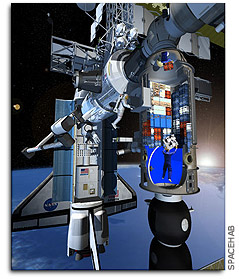 This new approach represents a marked refocusing of the scope of the Enterprise project. As originally envisioned by Spacehab (when announced in December 1999) Enterprise was to:

“…house a broadcast station and a research laboratory in which company-sponsored microgravity experiments targeting new biotech and advanced materials products and processes will be conducted. Spacehab officials estimate that it will cost approximately $100 million to develop Enterprise and establish [a] space media company. Spacehab will raise private financing for its portion of this endeavor. Energia will construct Enterprise and coordinate with the Russian Space Agency (RSA). RSA will provide launch services and other resources to the enterprise.”

In 2000 Spacehab’s Space Media and Energia formed “Entermedia” a company designed to foster commercial activities aboard the Russian segment of the ISS. With the collapse of the dot com bubble and less than stellar success by similar ventures such as Dreamtime, media business for Enterprise was not forthcoming. As such, Spacehab was forced to rethink its approach. Spacehab has all but abandoned this media focus and is now eagerly pursuing business from NASA with Enterprise marketed as a replacement for the on-again off-again ISS Hab module.

Enterprise is now envisioned as a crew habitat that would allow the crew size of the ISS contingent to be expanded to 6 on an interim basis, while NASA and its 16 international partners continue to address the longer-term habitation and crew rescue issues. Another potential benefit of the Enterprise project is that it would provide a Soyuz/Progess docking collar attached to the unit’s base, giving another location for a Soyuz that would not block the current airlocks and docking accommodations for the single Soyuz that remains on the station.

With a change in the mission of Enterprise comes a need to redesign its interior for habitation purposes. Spacehab also holds out the hope that other capabilities of Enterprise will find customers. As such, Lounge said that Enterprise can be re outfitted to accommodate a host of potential uses, and that some research racks would be preserved no matter whether the customer bought habitation or stowage services. Eight research racks on each side of the module are factored into the current designs, Lounge said.

Lounge said that the project needed to raise “under” $100 million to build and launch the module. Enterprise is based on a design adopted from the Progress tanker spacecraft. While construction of Enterprise has not yet begun, Lounge said that the craft could be ready by 2004 to provide crew habitation services if customer support could be obtained.

Despite Spacehab’s continued enthusiasm for Enterprise, the probability of ‘customer interest’ from the only conceivable customer (NASA) is unclear – at best. NASA has been directed by the White House to delete the Hab module from the ISS program due to cost overruns. This guidance is somewhat redundant inasmuch as this module had already been deleted from the work being done by ISS prime contractor Boeing several years ago. That not withstanding, NASA has significant money problems that are forcing them to do without things once seen as critical to their core vision of what a space station should be. Still, NASA holds out hope that it will eventually be able to bring things such as the Hab module “back into the program”.

None the less, given the cuts being made to many smaller NASA programs so as to meet Presidential budget guidance, it is hard to see how NASA would be able to provide the $100 million Spacehab says it needs – or even a substantial fraction of that amount.

As currently described, the new Enterprise project requires a launch on a Shuttle. Given that the ride for the SPP was originally “free” (as far as Russia was concerned) under the terms of the ISS MOU, and that the SPP is being downsized with upmass freed up, it would seem that the Enterprise project is relying on a Shuttle launch at little or no cost. This would also free up the need for Energia to provide a Proton launch at its own expense.

Given that NASA’s own ISS and Shuttle commercialization policies still exist only in draft form, one wonders how Russia can expect to re-sell cargo space on an American Space Shuttle when Americans can’t yet agree on a way to (or if to) sell it to Americans.

Then again, the first American tourist to go to the ISS got there by buying a ticket on a Russian rocket.