By Marc Boucher
May 16, 2011
Filed under General Story 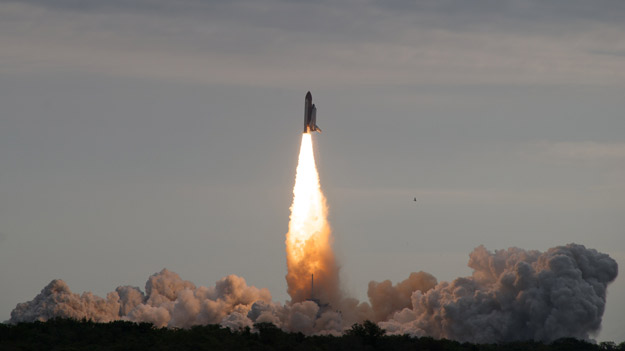 For the nearly 500,000 people watching the launch live in and around the Kennedy Space Centre the Space Shuttle Endeavour blasted off with on a plume of bright orange flame and quickly disappeared into the low clouds.

With everyone holding their breath as low clouds surrounded the launch pad the countdown progressed with nary a glitch. When the countdown reached t-minus 31 seconds, at the point when the shuttle computer went internal, the gathered crowd at the countdown clock cheered.

As the shuttle solid rocket boosters fired and Endeavour jumped off the launch pad it only took about 22 seconds before she was flying through the low clouds. But in that time the almost blinding orange flame seen from the countdown clock followed by the sound shockwave which physically hits everyone was enough to wow even the seasoned shuttle launch viewer let alone the rookie viewer. And just like that she was gone from view but the reverberations through the clouds kept on coming.

It was a launch like most others meaning that there were issues that cropped up during the countdown including a damaged tile, a need to balance the pressures in the Orbital Maneuvering System (OMS) and low clouds. But none of these issues was significant. And those pesky APU’s that scrubbed the last launch worked flawlessly after the aft load control assembly and cabling were replaced. 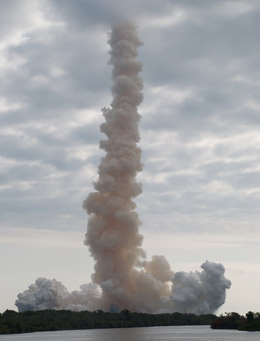 The tile that was damaged was due to a routine removal of a protective material around Endeavour’s side hatch when it came time to close the hatch. As the material was removed it pulled off a previous repair to the tile. Because this had happened before a tile repair kit was readily available and a slurry, a thick suspension of solids in a liquid, was applied to the tile which quickly repaired the problem. The damaged tile would have no effect on the mission.

The need to balance the pressures in the Orbital Maneuvering System (OMS) was something that had happened before and really was not considered a problem as Mike Moses, Mission Management Team Chair and Space Shuttle Launch Integration Manager said, calling it a “problem was a stretch”.

When describing the low clouds and ceiling issue Moses said “What you saw was a ceiling right around, a little higher than 5000 feet, but not very thick, which satisfies our rules both on the shuttle side and on the range side for safety reasons and we were able to launch today.“

Adding a little levity to the low cloud issue Moses said “and you can see that we don’t have any flight rules or launch commit criteria that say how long you can see the launch before it goes out sight, (laughter), so (I) apologize if the view wasn’t the best, but the data we were looking at in the control centre was absolute perfect and um we weren’t going to wait around any longer for an opening to come up, we had the clouds were we needed them and so we went.“

Endeavour on her 25th and final mission will be in orbit for a 16 day mission in which she will deliver the Alpha Magnetic Spectrometer-2 (AMS-2), the Express Logistics Carrier-3, a high-pressure gas tank and additional spare parts for the Canadian Dextre robot, a part of the Mobile Servicing System on the the International Space Station. Endeavour is scheduled to return to the Kennedy Space Center at 2:32 a.m. EDT on June 1st.