Using zebrafish in an environment designed to remove the effect of gravity, Dr. Stephen Moorman’s NASA-sponsored research has shown that a time period exists during which the vestibular system must receive a normal gravitational stimulus for proper development. As with other sensory systems, absence of the stimulus during this window, known as the critical period, results in permanent functional deficits. 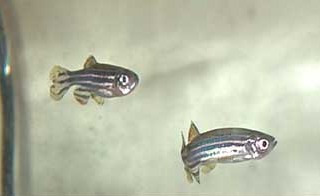 Our experience of the external world is mediated by our sensory systems. Through the process of transduction, these sensory systems convert external stimuli into electrical impulses that convey information to our central nervous system. Eyes sense photons. Ears sense sound waves. The vestibular system, located in the inner ear, senses gravity and accelerations of the body. Each sensory system is specific to its stimulus, and without it we would have no experience of that stimulus.

During the development of an organism, if a particular stimulus is absent throughout a specific span of time, the ability to sense the stimulus will be compromised, perhaps permanently. This span of time, known as a critical period, represents the shortest period of stimulus deprivation that results in a permanent sensory deficit.

Critical periods were first identified in the visual system of cats. Moorman, who recently left Case Western Reserve University for Robert Wood Johnson Medical School, explains it this way: “The connection between the eye and the brain has to be wired in a very precise way, and to establish that precise wiring, you need to have visual input. What we are seeing in the zebrafish is that in order to establish the wiring of the inner ear to the nervous system, you have to have gravitational input.”

Studying development of the vestibular system is a priority for NASA. From a basic research standpoint, it will shed light on the developmental and evolutionary relationships between gravity and life. From a practical standpoint, it will help us better understand and perhaps counteract the effects of living, working, and even growing up in the absence of normal gravity. Identifying critical periods in vestibular development is a key step in addressing these questions. The National Research Council’s Committee on Space Biology and Medicine specifically recommended that “Studies should be performed to identify the critical periods in vestibular neuron development . . . This information is essential to design and interpret subsequent flight experiments on the effects of microgravity on vestibular development.”

So, how is it possible to study the absence of gravity here on the ground? It was hypothesized that during the critical period, the vestibular system requires a net force that has a fixed direction and is above a certain threshold for normal development to occur. NASA has developed a piece of equipment called a bioreactor that, by rotating cells within a solution, provides a “model” of microgravity for ground-based experiments. By putting zebrafish embryos in the bioreactor, Moorman was able toexpose them to very small magnitude net forces that continually changed direction. This effectively puts the embryos in a condition of no net gravitational force.

Image Above:
Head-tilt test performed on the same 96-hour old zebrafish hatchling to check for vestibular deficits. This hatchling, about 0.5 cm long, was placed in a hematocrit tube. If you look closely at the eye, you can see a small black mark (see red arrow) at the bottom of the iris in both pictures. The position of the black mark indicates the orientation of the eye. In the picture on the right, the tube was tilted. The black mark staying at the bottom of the iris in both pictures indicates that the eye rotated as the hatchling was tilted; this animal’s vestibular development was not functionally affected. Eye rotation does not occur correctly when embryos are raised in the bioreactor.

Using these procedures, Moorman showed that when zebrafish are deprived of a stable gravitational force during only the period 24 to 72 hours after fertilization, they exhibit significant, long-lasting functional deficits in their vestibular apparatus. These results provide the first specific evidence for a critical period for the vestibular system.

Moorman believes that these deficits are permanent, but the zebrafish also display various behavioral effects that make it difficult to determine this. In particular, swimming ability is affected so that the fish cannot effectively feed, reducing their life spans to 10-14 days.

Key next steps in Moorman’s work would be to confirm his zebrafish findings in space and to identify a corresponding critical period in mammals. To conduct the zebrafish experiment in orbit, the timing of exposure to microgravity would have to be carefully controlled. In space, a centrifuge–which provides artificial gravity–would be required to, in effect, turn normal gravity on and off. This more complex prospect will be possible when facilities are available on the International Space Station (ISS). Confirming the zebrafish results in mammals will also require similar ISS-based facilities since the bioreactor cannot accommodate non-aquatic species.

Fortunately, the model of studying zebrafish in the bioreactor has opened the door for many possible ground-based developmental studies. Having established that functional deficits are linked to the vestibular critical period, Moorman plans to explore whether the absence of gravity results in physical changes as well. He also plans to look at other parts of the developing nervous system and to use the findings from the 1998 STS-90 Space Shuttle Neurolab mission as a springboard for further study. As he sees it, “Really interesting results came out of that mission. There were a lot of questions raised that we can follow up on, such as possible gravitational effects on gene expression in the developing nervous system.”