People have been throwing things out of spacecraft for a quarter century. Until now, all that drifted away either was junk – or instantly became junk once it got away from its owner.

Toward the end of 2001 an astronaut will open up several Space Shuttle middeck lockers, pull out some parts, assemble a small satellite, don a spacesuit, float out of an airlock, and deliberately throw the satellite overboard. No rockets. No springs. Just muscles.

A few puffs of a cold gas thruster and the satellite will be in a slightly different orbit – one that won’t intersect with that of the ISS.

Once in orbit the satellite will add another novel feature to its repertoire – it will contain the first webserver flown in space – one that will be accessible from text-enabled cellphones and other wireless devices.

SkyCorp is looking for Beta Testers

20 January 2001: SkyCorp is looking for people to serve as beta testers for the wireless service it will begin to implement with the launch of its first satellite. The test is scheduled to be conducted during 1 – 30 November 2001. SkyCorp says that it will operate the beta test with approximately 50 customers located in the United States. This test will be done with “a wireless access device that will allow a Palm Pilot or laptop communicate directly with our space-based Apple Macintosh Web host.”

MORE INFORMATION AT SKYCORP
The concept was developed by SkyCorp Inc., a start up firm located in Huntsville Alabama. In October 2000 SkyCorp’s CEO Dennis Wingo announced that SkyCorp and NASA have signed a commercial Space Act Agreement whereby SkyCorp’s satellite would be deployed in 2001 from either a Space Shuttle mission (possibly STS-107) – or from the International Space Station. The announcement was made at the annual convention of the Space Frontier Foundation in Los Angeles.

The satellite will fly as a DTO – a Detailed Test Objective – a class of Shuttle payloads used to verify certain new technology and engineering concepts for possible use on future Space Shuttle missions. A decision on whether to launch from a Shuttle airlock or out of the ISS has not been made yet. However, according to Wingo, launching the satellite at a 51.6 degree inclination (ISS) would provide greater ground coverage than a non-ISS shuttle flight such as STS-107 which would fly at a lower inclination.

DTOs often involve a demonstration of a new concept for doing things in space. In this case, the demonstration will center around the assembly, checkout and launch of a small satellite. SkyCorp’s satellite will serve as proof of concept for a largerproject it has planned – a LEO (Low Earth Orbit) 544 satellite constellation that would offer Internet access on a global scale.

But haven’t we heard this constellation concept before? Already there are a number of orbital constellations underway – Teledesic, SkyBridge, SpaceWay. One system, Iridium, is in place and was operational until earlier this year when the company went broke. The Iridium system is now mutli-billion dollar ghost fleet of satellites now awaiting deliberate destruction.
[Update: on 6 December 2000 the Defense Information Systems Agency (DISA) announced an award to Iridium Satellite LLC worth $72 million for 24 months of satellite communications services. This contract provides unlimited airtime for 20,000 government users over the Iridium satellite network.]

Iridium was an interesting concept overtaken by technology (the Internet was more or less non-existent in terms of common usage when the satellite system was designed) and priced out of reach of all but a small group of elite customers. The newer entrants into this market will be Internet savvy and claim to be aiming the pricing policies to a much wider audience. But the cost of admission to this club is still measured in billions.

SkyCorp’s concept involves substantially less money up front. Indeed, according to Wingo, his company’s system has the prospect of being a money maker almost immediately. Commercial sponsors are already being sought. According to Wingo, a full constellation could be in place and operational for a fraction of what it will cost to put up Teledesic and its competitors. The problem facing Iridium and its successors is the price of entry into the market. By employing the SkyCorp concept, Wingo hopes to reduce the cost of entry substantially. When it costs less to get a service up and running, it is possible to move towards profitability faster, according to Wingo. 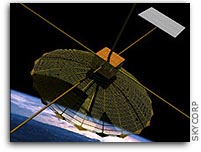 SkyCorp’s concept involves novel departures from the standard way of putting satellite constellations into orbit. In describing the concept, Wingo urges people to “think different about space”. SkyCorp’s satellites are launched only partially assembled when they leave Earth. They are also designed purely as creatures of space. SkyCorp’s approach is so novel that a patent application is currently under review.

The current way of getting satellites into space is to place them on a rocket and blast them into space. The ride to orbit can be rather intense and violent experience. As such, the satellites need to be engineered to withstand the stress of launch (which lasts for 10 to 15 minutes) and then function in microgravity (often for years). The satellite also has to be sophisticated enough to automatically unfurl and activate various pieces of itself at just the right time since there won’t be anyone around to fix things if they go wrong – at least not without considerable (additional) expense.

SkyCorp’s concept is to build the satellites to perform only in space – not during launch. Moreover, unlike the current approach to launching satellites, SkyCorp’s satellite won’t even be fully assembled until it is in orbit. The concept developed by SkyCorp (being patented) is known as “Gossamer”.

According to SkyCorp’s agreement with NASA, the test spacecraft will fly disassembled, with its pieces packed in shock absorbing carriers within 3 Shuttle Middeck lockers. A total of 150 pounds is allocated to the payload and its support equipment. Once the Shuttle is in orbit, an astronaut will open the lockers, take out the parts, and assemble the satellite by attaching solar arrays, antennas, and other items. An astronaut will then take the spacecraft into an airlock (on the Shuttle or the US segment of the ISS) and release it into its own independent orbit with a hand toss.

This will not be the first time a human has launched a satellite. Gloves, nuts, bolts, and other things have managed to float out of spaceships in the past 30 years – usually as the result of human interaction. Several dramatic examples of a intentional human-launched satellites have already been performed duting Shuttle missions. During the first HST servicing mission (STS-61, 1993) astronaut Kathy Thornton threw a damaged solar array from the Hubble Space Telescope overboard after the crew was unable to roll it up for return back to Earth. In 1988, during mission 51-I astronauts Ox van Hoften and Bill Fisher captured the ailing 15,400 pound SYNCOM IV-3 satellite and performed a successful on-orbit repair. Astronaut van Hoften then re-launched the satellite by hand while perched on the Shuttle’s robot arm.

SkyCorp’s spacecraft only needs to withstand the stress of being assembled and “launched” by an astronaut. It also needs only to be able to retain its structural integrity in microgravity as it performs his mission.- and then hold itself together after launch – hence the named “gossamer”. The satellite is designed to orient and operate in a gravity gradient mode thus greatly simplifying its guidance, navigation, and control requirements. This is not your regular beefy, complex satellite.

Curiously, the concept will use hardware and software from a company renowned for its innovationand offbeat ways of tackling a problem or marketing a product: Apple Computer. Wingo was one of the first persons to fly Mac computers in space having flown them as part of Shuttle payloads on missions STS-46, STS-57, and STS-63. The first Mac (and the first laptop) flow in in space was a Mac Portable flown on STS-43 in 1991. Wingo chose Mac technology because of it simplicity of operation, reliability – and the fact that the U.S. Army had decertified NT and Linux-baser webservers for security reasons. Meanwhile, the Mac G4 found itself formally certified as a supercomputer

The satellite’s computer will use a G4 500 Mhz processor running OSX with a webserver running under Apache. The server will have 10 GB of storage space and will be hosting up to several thousand websites. The server will also have a mail server that will allow people to get email directly from space. The SkyCorp satellite will use the 802.11 Direct Sequence Spread Spectrum (DSSS) worldwide industry standard, and will be accessible for operations purposes at up to 11 Mb/sec. This protocol is the core of Apple’s AirPort wireless technology developed jointly by Apple and Lucent Technologies. For end users on the ground, Wingo says that 56kbps speeds will be available to people with wireless devices – when the satellite is overhead.

Some of these websites aboard the satellite will be paying customers. Others may be hosted as an in-kind exchange of services. Since SkyCorp is paying a $2 million fee for the Space Shuttle flight opportunity as part of this agreement – and this satellite is supposed to be a proof of concept in economic terms as well as technical terms – there is clearly a focus upon generating income. [Update: Skycorp has announced a rate schedule for webhosting services aboard their test satellite.]

As this concept was being developed, Wingo sent an email off to Apple CEO Steve Jobs on a whim. In the email he told Jobs that he was one of the first people to fly a Mac in space and that he wanted to have a Mac be the first webserver in space. Jobs responded 2 days later. As a result, Apple will be donating all of the hardware to be used and will provide engineering support to SkyCorp. Apple will also be promoting the project on its website and in other PR channels.

Note: Dennis Wingo was a participant in a breakfast held on 24 October 2000 at the International Space Symposium titled “Space Entrepreneurs: What’s Up Next in Space” being sponsored by the National Space Society.

Wingo said that his company is considering flying a Mac G4 cube – either in whole or in part. It is important to note at this point that the author of this article is an unrepentant Macaholic. Given the way Apple used television to tout the declaration by the US Department of Defense classified G4 Mac as a “super computer” (a swarm of toy tanks circling a Mac desktop computer), one can only imagine what form Apple’s PR will take for this project.

Wouldn’t it be ironic if a G4 cube was actually flown – given the fact that Apple’s long time nemesis and business partner Microsoft is often referred to as being the Borg.